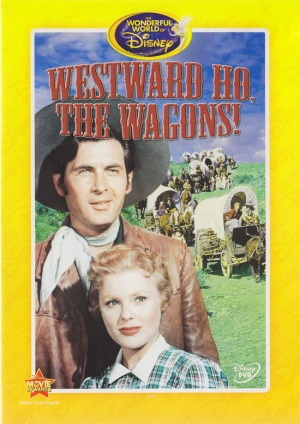 The film takes place in 1846 along the Oregon Trail.

We see a wagon train heading West to pursue a better life. They stop every now and then to rest, sing songs, and just get some recovery until it’s time to continue on the journey. The wagon train has a few key “leaders”, but our main protagonist is the doctor John Grayson, played by Fess Parker.

At the moment, everyone is taking a rest in what is Pawnee territory: territory belonging to a group of Native Americans who aren’t too fond of white people. One of the young boys belonging to the wagon train is actually kidnapped by some of these Pawnees. When word gets back to Doc Grayson and the other leaders, it’s nighttime and they know they can’t do anything to rescue the boy until daylight. Luckily enough, the boy manages to escape back to the camp. Doc Grayson and the others quickly head on down the trail hoping to get as far away from the Pawnees as they can.

The next morning though, the Pawnees (who went in chase after the boy) catch up with the wagon train and a skirmish occurs. Doc Grayson and the others win the skirmish by letting loose a bunch of horses which changes the priorities of the Pawnees.

Thankful to be alive, Doc Grayson and the others continue down the trail until they reach by a fort in Sioux territory. Now, the Sioux are more friendly to white folk, so that’s good news. The person in charge of the fort is a Frenchman named Bissonette, played by Sebastian Cabot.

He lets them pitch their camp near his fort and trade in the trading post nearby. At the trading post, one of the Sioux chiefs notices a young girl from the wagon train whom he deems to be “good medicine”, or good luck for the tribe. He then later visits the settlers’ camp to make a deal: He’d give them a white robe to wear that would allow them safe passage through any other Native American territories they may pass through in exchange for the girl. They of course refuse this which angers the chief.

Not long after, the chief’s young son injures himself and is almost on his deathbed. With the Sioux medicine man unable to cure him, Doc Grayson and a few others decide to help with what they can. Fortunately, they are able to save the boy which earns them the Sioux chief’s respect. He gives them the white robe and they go along their way.

And that’s the end of the film.

And as you can see, there’s a lot of problems with this movie. The biggest problem is not so much that it’s boring (which it is) and not so much that it’s bad (which it is), but that it’s POINTLESS! The film doesn’t seem to have any reason to be made! The movie is an hour and a half long and we don’t really have any sort of plot point until the hour mark when the Sioux chief becomes interested in having the girl for good luck! Yeah, in the beginning, you had that brief kidnapping by the Pawnees, but it’s solved quickly and honestly goes nowhere!

The movie also features a few songs: forgettable ones, but not bad to listen to throughout the film. None of the actors were incredibly bad, but nobody was incredibly good either. Maybe that’s because the movie honestly doesn’t have any strong character focus. Notice I only mentioned Fess Parker and Sebastian Cabot in this review even though others appeared such as Jeff York and Kathleen Crowley.

I guess one of the best things to mention about the movie is that the landscapes and matte paintings by Peter Ellenshaw are gorgeous! Other than that, this is an incredibly pointless film that is better left forgotten!

The next review will be posted on October 3rd.