I can easily say that my most awaited film for this year is “Saving Mr. Banks”. Releasing in December, the film is about the story of how the Disney film, “Mary Poppins” was made. Well, it’s more about how Walt Disney took years to convince the author, P.L. Travers, to sell him the rights to her book. And as the stories have said, P.L. Travers wasn’t the biggest fan of what Walt did with her story!

In other words, “Saving Mr. Banks” is about Disney history which is like the Disney fanatic’s dream come true! Firstly, we get to see Walt Disney as a character in a film!

And secondly, this movie looks like it’ll let us venture into P.L. Travers’ past and see what exactly was her inspiration in writing the book. Maybe this can help us understand why Ms. Travers felt so disgusted by Walt Disney’s film.

So while we wait for that film to come out, why not take a look at the film, “Mary Poppins” itself? So without further ado, ladies and gentlemen, here’s everybody’s cherished “Mary Poppins”!

And remember, SPOILERS AHEAD!!! END_OF_DOCUMENT_TOKEN_TO_BE_REPLACED

Lewis Carroll’s “Alice’s Adventures in Wonderland” and “Through the Looking-Glass” opened up a wonderful fantasy land to us, one that was driven by nonsense, rather than logic.

And people around the world fell in love with this wondrous, illogical Wonderland. The appeal of this fictional place as well as that of its characters naturally inspired filmmakers to adapt Lewis Carroll’s books to film numerous times over the years. Walt Disney was one of these filmmakers, hence he created the animated classic, “Alice in Wonderland”, as well as an animated/live-action “Alice Comedies” series 20 years earlier!

Due to the popularity of both those projects, it was inevitable that the Disney Studios would create yet ANOTHER film based on the Wonderland characters. This time, the film would be a live-action/CGI film directed by visionary director and ex-Disney artist himself, Tim Burton. It would be called, “Alice in Wonderland”.

This film would go on to make over a billion dollars which convinced the Disney studios to remake more of their animated classics into live-action films. Some films currently in production include live-action adaptations of “Cinderella”, “Beauty and the Beast”, “The Jungle Book”, and “Sleeping Beauty”. This “animation-to-live action remaking ideology” has been met with opposition from many Disney fans around the world.

And remember, SPOILERS AHEAD!!! END_OF_DOCUMENT_TOKEN_TO_BE_REPLACED 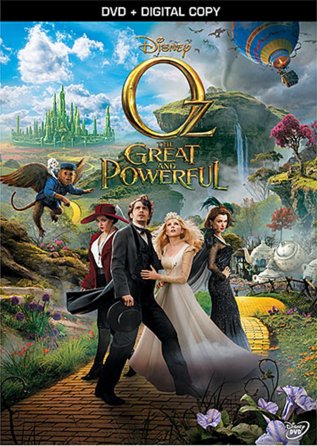 L. Frank Baum’s “The Wizard of Oz” was probably the first major American children’s tale that wasn’t inspired by either European fairy tales nor by tales from other Eastern cultures. It affixed itself to be the true American children’s story; so it seemed imminent that it would get adapted for the screen in a matter of time. And after the success of Disney’s “Snow White and the Seven Dwarfs”, MGM went on to do just that and created the 1939 musical classic, “The Wizard of Oz”.

It wasn’t until after a few re-releases did the film become a megahit and a household name! And it wasn’t long after that people would try to recreate the magic of this musical masterpiece and the books that inspired it. Walt Disney himself would be one of these people. He had even begun working on a film entitled “Rainbow Road to Oz” featuring his Mouseketeers. It was supposed to be Walt’s first live-action musical, but due to his lack of satisfaction with it, he quickly gave up on that idea and made “Babes in Toyland” instead.

But the Disney Studios wouldn’t give up on the wonderful world of Oz so easily! Oh no, they would eventually make two live-action Oz-related films! The first was a sequel to the 1939 film entitled “Return to Oz”. Released in 1985, it sadly was a financial disappointment, but has since gained cult status!

And the second was an official prequel to the 1939 film entitled, “Oz: The Great and Powerful”, which is the subject of today’s review! So sit back and enjoy as we venture through this 2013 box office sensation!

And remember, SPOILERS AHEAD! END_OF_DOCUMENT_TOKEN_TO_BE_REPLACED