Welcome to my blog, My Live Action Disney Project. Call me Mark.

And that was the story of how this blog came to existence! So, will I be reviewing ALL the live-action Disney films? Well, not all! Firstly, I will only be doing the THEATRICAL and DISNEY+ releases. Secondly, I won’t be doing any of the documentary films (Waking Sleeping Beauty, Earth, Oceans, Victory Through Air Power, etc.). And thirdly, I won’t be doing films that are/were released by other subsidiaries of Disney or studios that were later bought by Disney (films from Touchstone Pictures, Hollywood Pictures, Miramax Films, Marvel Studios, Star Wars films, etc).

Summing up, I’ll be viewing (and reviewing) all the live-action films that are PURELY Disney! A list of the films I’m referring to can be found here: http://en.wikipedia.org/wiki/List_of_Disney_Films .

Now the question may arise, “How often will I review a film?”. Well, as of now, I plan to post every Tuesday: one week with a review and the next with a picture hint of the review to come.

And finally, “How do I plan on rating the films?”. Well, I thought about this for a while. I didn’t want to give them a percentage out of my own head. And the comparison ranking that I use for my other blog would be too hard to keep up with here. So what I did was devise a set of questions that I’d ask myself after each film and give points based on my responses. I’d tally up the points after and then procure a percentage from that. Click the image below for an enlarged version of my rating sheet! 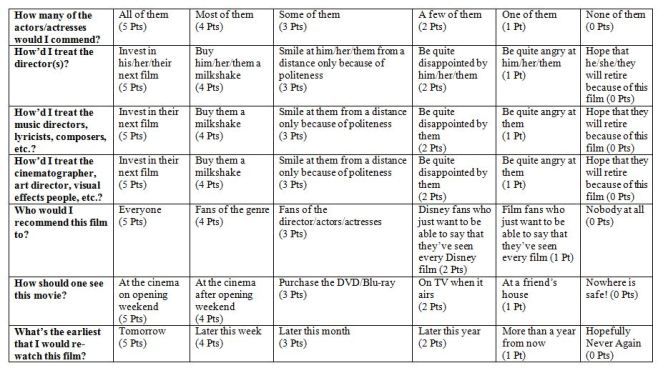 And yes, I know it’s not an extremely technical way of rating, and it may be somewhat subjective. But in the end, it’s the way that I feel best sums up what I look for in films to determine whether they’re good or not. And here’s the grading scale I follow:

So without further ado, please visit this blog weekly, read the reviews, and comment so I know how I’m doing! I hope you all enjoy yourselves here!