Just wanna start this review with a shout-out to my long-time follower, kirksroom! He requested me to review this film since October 2014 and only NOW I’m getting to it! I almost got to it a few months ago, but a case of mistaken identity regarding the movie he wanted me to review resulted in it being prolonged even more.

I apologize to you, kirksroom, for taking so long to do this film! So without further ado, let’s see whether I enjoy this “comedic kidnapping caper” as much as kirksroom does! Time to review No Deposit, No Return!

The film opens up to two young siblings, Tracy and Jay Osborne, played by Kim Richards and Ben Savage, respectively. They’re students at a sort of boarding school and all the students are going away for the Easter holidays. All the students, that is, except for the Osborne kids.

Sadly, the Osborne kids don’t seem to have a father and their mother is a busy woman in charge of a magazine. She’s currently working in Hong Kong and hasn’t had time to see her kids for the past few holidays. This time, it’s no different. Instead, she’s sent plane tickets to the kids so that they could spend the holidays at their grandfather’s place in Los Angeles.

The kids are disappointed as usual about not being able to see their mother as well as not too excited to see their grandfather whom they haven’t gotten along well with in the past. However, they get an idea while on the plane. What if they buy new plane tickets that will take them to Hong Kong where they can surprise their mother and spend the holidays with her? The question arises though: How do they get money for two plane tickets? This problem is put on hold when the kids arrive in Los Angeles, but Jay’s pet skunk (whom he has smuggled on board the plane) gets loose and causes a riot.

Scared of being in trouble, the kids quickly run off the plane and into a taxicab waiting outside the airport. Unknowingly, they happen to enter the taxicab at the same time as two men are hurrying into it as well. These are Duke and Bert, played by Darren McGavin and Don Knotts, respectively. Why are they hurrying into the taxicab? Well, apparently, they’re thieves. Well, they USED to be thieves back in the day. They actually were unlucky thieves: every safe they used to break open had useless things inside of it. Anyway, they’ve recently run into trouble and needed money quickly so they decided to break into one of the safes at the airport. Before they’re able to, the alarm sounds and they hurry to escape as quickly as they can right into the taxicab where we see them now.

Both parties are shocked to see the other party in the taxi with them and demand that the other party leave. But, Tracy, being quite sharp, notices that Duke and Bert are ducking down hoping that no police cars can see them. She also notices that they have safe-cracking tools on their persons leading her to the conclusion that Duke and Bert are thieves. She uses this to her advantage threatening to turn them in if they don’t let them stay in the taxi with them.

Meanwhile, this whole incident has been witnessed by the kids’ grandfather, J.W. Osborne, played by David Niven. You see, he has come to the airport waiting in his car for the kids when he noticed the kids go into the taxi with Duke and Bert. He then decides to follow the taxi all the way to the hideout. Now, he makes an interesting decision. You see, Mr. Osborne is quite rich and has a lot of expensive stuff at his house that often gets broken by his grandchildren whenever they visit. He also doesn’t think that the two men who got into the car with the kids are in any way dangerous to the kids. So, he decides to leave them there! Yep, he decides that if the kids stay in this hideout in an old part of town, they’ll learn how to appreciate finer things. Also, it’ll give him a chance to enjoy his Easter holidays without having his grandchildren around. He, of course, leaves one of his servants in the area to keep an eye on the kids, but other than that, he’s just glad to have them out of his hands!

Back at the hideout, we soon learn why Duke and Bert were trying to break the safe at the airport. You see, they owe some money, $9000 to a man named Big Joe, played by Vic Tayback. If they don’t pay it back to him in a few days, it’s curtains for them pretty much. When Tracy hears about this, she concocts a plan that she throws onto Duke and Bert the next day. You ready? She suggests that they “kidnap” the kids!

You see, J.W. Osborne is quite rich, right? So, Tracy’s idea is to send a ransom note to their grandfather saying that Duke and Bert have kidnapped the kids and that he has to pay them $100,000 to get them back. The grandfather would have no choice but to pay the money. The kids will take the money they need to buy plane tickets to go to Hong Kong while Duke and Bert can keep the rest of the money to pay back their debts and whatnot. Of course, the thieves are quite taken aback and against the idea at first, but after some manipulation by Tracy (my, she’s a sly one), they realize they have no choice but to do what Tracy says. This “one night only” has just extended its lease!

When Mr. Osborne receives this ransom note the next day, he, of course, pays no mind to it since he knows where the kids are and assumes that this is just a silly bit of childish fun from the kids.

The second third of the movie mainly deals with Duke and Bert slowly befriending the kids while they repeatedly try to make Mr. Osborne see that they mean business by sending him more ransom notes decreasing the required payment each time. There’s also a sergeant named Max Turner, played by Herschel Bernardi, who’s searching for the person who broke open the airport safe. Sergeant Turner was familiar with Duke’s handiwork since back in the day when Duke was a full-time thief, but he never ever got to see what Duke looked like. However, when news leaks through that the Osborne kids have been kidnapped, the sergeant is assigned that case instead. Unbeknownst to him, both cases are one and the same!

As the sergeant gets deeper into the case, Mr. Osborne realizes that he must spill the beans soon. The last straw that breaks the camel’s back is when the kids mother, played by Barbara Feldon, shows up in Los Angeles! She has read about the kidnapping wondering why Mr. Osborne is so calm about the whole situation.

After they lose the sergeant, Duke and Bert assure Ms. Osborne that the kids are safe and make her see that all the kids want is time with their “busy mother”.

Meanwhile, the kids, have run away from the hideout to the grandfather’s house when Big Joe (who comes to know about them) enters the hideout and tries to use the kids to get even more money from Mr. Osborne. Thankfully, due to some hideout modifications by Jay, Big Joe falls into a trap at the hideout resulting in him hanging being hanged upside down from his feet!

Unfortunately, Mr. Osborne is also on his way to the hideout to retrieve the kids. He enters the hideout falling into one of the hanging traps that Jay has laid too. Even a detective later falls into this trap resulting in a whole bunch of people just hanging around at the hideout.

Anyway, the kids are at their grandfather’s place and notice he’s not there. But, they do notice that he has left his safe full of money open. They then decide to just take the money from the safe to buy plane tickets for themselves, but accidentally get locked in the safe.

Bert, Duke, Ms. Osborne, and Sergeant Turner have all made it back to the grandfather’s place after someone claimed they saw the kids head back here. They search for the kids until they realize that they’re locked in the safe. The combination is only known by the grandfather and they’re quickly running out of time. Duke decides to then use his safe-cracking skills to break open the safe even though he knows that doing so would tell Sergeant Turner who he really is. Thankfully, Duke manages to open the safe and save the kids who are happy to see him and Bert. They’re ecstatic when they realize that their mother is there as well!

Sergeant Turner realizes who Duke is, but also realizes that Duke and Bert have changed for the better and given up their past life of crime. So, he lets the two of them go. The movie ends with everyone getting their happy ending: The grandfather is rescued from his “hanging” position and begins to enjoy time with his grandchildren. The grandchildren also begin to enjoy time with their grandfather. The mother has decided to move her office to Los Angeles where she can be with her family. Duke and Bert have received a loan from Mr. Osborne to make their new garage business flourish. And it’s even suggested that Duke and the mother might have feelings for each other.

And that’s No Deposit, No Return. Um…I liked it.

The movie is entertaining as many of Disney’s comedies with Don Knotts tend to be. The story is a creative one, in my opinion, and I was interested to see how everything would turn out at the end. Overall, the acting is great, with even the kids giving good performances.

The biggest problem that I have with the film is that some scenes go on for FAR too long! Since it’s a comedy, there are many comedic scenes including car chases and hijinks involving Don Knotts. And these scenes go on FOREVER! I found myself constantly looking at my phone to see how long these scenes were going on for! When a movie makes you do that, you know that some of those scenes could be cut! But, in the end, it’s not a massive fault of the film.

Summing up, I wouldn’t say that this is a favorite Disney film of mine, but it is one that I think is a good Disney film thereby proving my theory that a movie being “good” and a movie being a “favorite” is not necessarily the same thing. 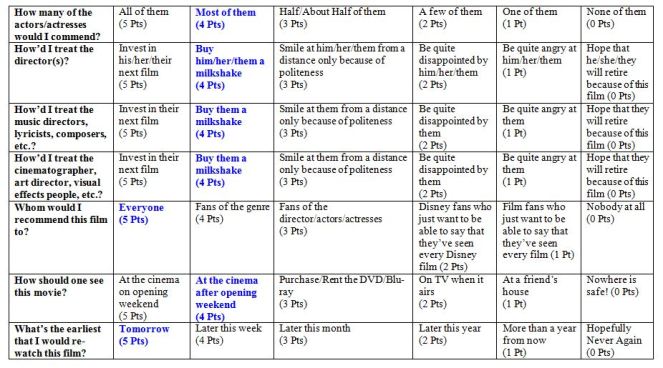 The next review will be posted on February 1st.