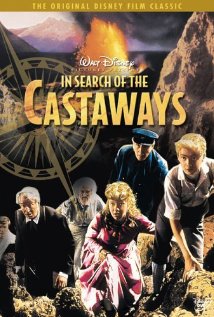 Today we take a look at yet another live-action Disney movie based on/inspired by the works of Jules Verne, In Search of the Castaways. Without further ado, let’s dive right into this review.

The movie takes place in Glasgow during the year 1858 where we see a posh party taking place on a yacht. Three people, in particular, who are not among the socially elite want to enter in on the party. First, there’s a young teenage girl named Mary Grant, played by the Disney star girl herself, Hayley Mills.

And lastly, there’s Mary’s younger brother, Robert, played by Keith Hamshere, who doesn’t really do all that much, so I’m probably gonna be ignoring his existence throughout most of the review.

Why do these three want to come aboard the yacht and crash the party besides the obvious reasons? Well, Mary and Robert’s father, Captain John Grant, has been lost at sea for some time and was presumed dead. Recently, Professor Paganel came across a message in a bottle which he found inside a mako shark. The message seemed to indicate that it was written by Captain Grant himself as both Mary and Robert identified the handwriting. The message also indicates that Captain Grant is alive, but shipwrecked/captured somewhere. Captain Grant used to work for Lord Glenarvan, the owner of the yacht upon which the party is taking place, so the trio wants to board the yacht to inform Lord Glenarvan of the survival of Captain Grant and see if he’ll lead an expedition to go rescue Captain Grant.

But, as you can imagine, the trio is not permitted access aboard the yacht as they’re not the socially elite and their story is taken as a fanciful lie by the guard. Nevertheless, they manage to sneak aboard the yacht without the guard noticing and eventually they bump into Lord Glenarvan himself, played by Dustin Hoffman.

No, he’s not played by Dustin Hoffman. He’s actually played by Wilfrid Hyde-White, whom many would recognize as Colonel Pickering from the film adaptation of My Fair Lady.

Anyway, when the trio explains their case to Lord Glenarvan, he dismisses them because tens of people have been coming to him with false leads about Captain Grant since he was reported missing and Lord Glenarvan sees this as yet another trick.

Mary tries hard to convince Lord Glenarvan’s son, John, played by Michael Anderson, Jr., that all of this is true, but he himself is skeptical. Fortunately after some time, he decides that it may be true and goes to convince his father. Lord Glenarvan is one of those characters who’s more bark than he is bite, so when his son explains the situation to him, he decides to give this a chance and wants to look at the note in the bottle.

Much of the note is waterlogged and illegible, but some clues can be deciphered. For example, the latitude is given, but the longitude isn’t. The note also makes reference to the fact that Captain Grant has been captured and the word “Indian” can be spotted as well. Lord Glenarvan assumes that Captain Grant must be in Australia. Professor Paganel says this would be correct if the letter had said “Aborigines” instead of “Indian”. He suggests that the Captain is actually in South America where he was captured by Indians. With this in mind, Lord Glenarvan and the gang set forth to South America to find Captain Grant.

Throughout their journey, we learn more about the characters’ personalities. Lord Glenarvan, as I’ve previously mentioned, is that stereotypical British guy who’s more bark than bite and overall a nice guy. Professor Paganel is a happy-go-lucky guy who sings a couple of songs (written by the Sherman Brothers) which indicate his philosophy to life: don’t get worried/wrapped up about things, rather take things easy and “enjoy it”.

Mary and John seem to develop feelings for one another. That’s not to say that they don’t annoy each other from time to time. John is amazed at how Mary is different from the other girls because she knows things like tying knots instead of knitting. Mary is also a character who would speak up when necessary, not in a harsh or authoritative way, but in a nice, but firm way, that she knows how. I feel feminists will like her character.

When they reach South America, they come across many things and experiences including travelling the Andes Mountains, getting caught in an earthquake, a giant condor almost kidnapping Robert, a flood causing them to seek refuge in a tree for a number of days, a jaguar who may want some human flesh for lunch, a fire in said tree, a close encounter with crocodiles, a water spout, and finally an Indian who befriends them and takes them to a nearby Indian village where some “white men” are imprisoned. Everyone’s excited as they feel that among these “white men” will be Captain Grant, himself, but when they arrive at the village, they find that that is not the case.

You see, our friends have actually been searching for Captain Grant in the wrong place! Professor Paganel realizes that he made a mistake since the mako shark (the shark which he caught which had the bottle inside it) only lives in and around the Indian Ocean, hence the word “Indian” in the note referred to the Indian Ocean, rather than “captured by Indians”. This means that Professor Paganel is probably in Australia, the place where Lord Glenarvan wanted to go to in the first place. So basically, they’ve just been on a wild goose chase for God knows how long!

Determined not to give up, our friends head to Australia seek information regarding Captain Grant.

As expected, loads of people (mainly from the lower-class) come in with stories claiming Captain Grant was last seen here or there and all the stories show different locations and don’t corroborate with each other. Finally, a gentleman comes in named Thomas Ayrton played by the future delicious voice of Shere Khan himself, George Sanders.

He informs Lord Glenarvan that a couple of years ago he was on a ship that picked up a man who claimed to be from Captain Grant’s ship. The man later died, but mentioned that Captain Grant and two men were shipwrecked off the coast of New Zealand and captured by the Maoris.

Mr. Ayrton offers to gather some men and supplies aboard Lord Glenarvan’s yacht, and together they all will head for New Zealand to rescue Captain Grant and the two men. Lord Glenarvan, impressed with Mr. Ayrton’s gentlemanliness agrees to this, but Professor Paganel still thinks that they need to search in Australia as New Zealand isn’t in the Indian Ocean. Nevertheless, they go ahead with the plan, but Professor Paganel remains cautious. Mary is somewhat cautious too as she has a bad feeling about this and even feels that she’s seen Mr. Ayrton before.

Their uneasiness is later proven to be not unwarranted as Mr. Ayrton and his crew later stage a coup and take over the yacht from Lord Glenarvan. You see, Mr. Ayrton is involved in gunrunning and needed a vessel by which to do his gunrunning and Lord Glenarvan’s yacht was fit for the job. But what connection does Mr. Ayrton have with Captain Grant? Well, Mr. Ayrton was one of the crew aboard Captain Grant’s ship which is why Mary recognized him. Mr. Ayrton proved to be treacherous and laid a coup aboard that ship as well and put Captain Grant and two of his loyal mates to sea. That’s how they ended up captured by the Maoris. And now, Mr. Ayrton repeats his previous actions and puts Lord Glenarvan and the others to sea.

The sea takes our friends to the Maori settlement where they too are taken as prisoners. In the lock-up there, they come across Bill Gaye, one of the mates of Captain Grant who is….not 100% sane. He’s played by Steptoe himself, Wilfrid Brambell.

Bill Gaye confirms the story that he, Captain Grant, and a third (who was later captured and probably dead) were put ashore by Ayrton and his men. He also admits to writing the note in the bottle himself while forging Captain Grant’s handwriting. Thankfully, Lord Glenarvan and the others along with Bill Gaye manage to escape the lock-up using a strong rope and a small hole that only Robert could fit through.

As they escape from the Maoris, they come across Lord Glenarvan’s yacht, which has banked on the land, and they manage to capture Mr. Ayrton in probably the quickest and easiest way that a bad guy has ever been captured.

Mr. Ayrton is taken prisoner, Mary and Robert are reunited with their father, played by Jack Gwillim, Mary and John continue their romance, and Lord Glenarvan and Professor Paganel are happy that all’s well that ends well.

In Search of the Castaways is a hard movie to describe. The acting is overall pretty good, but the plot does seem to be somewhat simpler and less adventurous than the other Jules Verne-based films that we’ve seen already. The songs are not the Sherman Brothers’ best, but they’re not intolerable either. I’m quite disappointed in the effects as many of them look fake. One can argue that it was for the time this was made, but a film like Darby O’Gill and the Little People was released in 1959 and had much better effects than this film did.

All in all, it’s a film that you have to see for yourself to decide if you’ll like it. I can’t say I dislike the film, but I wouldn’t rank it very highly either.

The next review will be posted on April 20th.