I mean a DISNEY film filled with paranormal activity, two orphans, Dr. Loomis from Halloween, and Ali Hakim from Oklahoma!. What type of film can this possibly be? Well, it’s the 1975 film, Escape to Witch Mountain.

It’s a film that seems fit to be shown during the Halloween time, although it’s more pleasant than scary. Actually it isn’t scary at all. Let’s take a closer look at this paranormal film that somehow isn’t scary!

The movie opens up with two kids being transported to their new home: the Pine Woods orphanage. Tony is played by Ike Eisenmann and his sister, Tia is played by Paris Hilton’s aunt, Kim Richards.

They’re a bit nervous, understandably, to be here, but their nervousness may stem from something other than just being nervous from being in a strange place. You see, during a baseball game at the orphanage , Tony manages to catch a fly ball by jumping ridiculously high in the air! And if that wasn’t strange enough, Tia is able to converse with Tony via telekinesis and during a fistfight with another boy, Tony manages to get a baseball glove and bat to move via their own power.

Now, if I were the other kids at this orphanage, I’d run for my life from these two apparent “witchcraft practitioners” or at least inform the head of the orphanage about these occult goings-on. Yet, none of the other kids do for some strange reason. Maybe that’s for the best as probably nobody would believe them.

So, what’s the deal with Tony and Tia? Well, we don’t really know for sure yet. Yes, they seem to be “sorcerers/witches.magicians”, but through their personal conversations, we learn that they themselves have no idea why they have these paranormal powers. They just know that they’ve had them for as long as they can remember, but how they got them is a mystery in and of itself.

Other strange things that happen include Tony and Tia managing to hear some dogs barking, Tony managing to paint a picture of a mansion that he’s never been to, and Tia constantly getting blurred flashbacks of what appear to be her and Tony’s lives before they were adopted by the Malones. Too bad the flashbacks are indiscernible or else we’d have a better idea of what the heck’s going on.

One day, all the orphans go on a field trip to the cinemas

when all of a sudden, Tia sees a man, played by Donald Pleasence, standing by a car. She and Tony approach the man and she tells the man that she has a funny feeling that he shouldn’t get into the car. And it’s a good thing that the kids warned the man as a tow truck soon crashes right into the man’s car! Had the man been in the car, he’d have most definitely been killed! This event piques the man’s curiosity and he realizes that these two kids have paranormal powers.

We soon learn that this man’s name is Deranian and he works for a rich millionaire (as opposed to those poor millionaires) named Mr. Bolt, played by Ray Milland.  Mr. Bolt is a millionaire obsessed with the paranormal and intends to use it to make him richer.

For example, he feels that with paranormal information, he can discover untapped mineral sources or detect upcoming natural disasters, etc. So far, all clairvoyants and false kooks (as opposed to those true kooks) have let him down, but after Mr. Deranian tells him the story about the two kids, Mr. Bolt is determined to have these two kids for himself!

He sends Mr. Deranian to adopt the siblings saying that he’s their long-lost Uncle Deranian. And via forged documents, the orphanage believes this to be true and sends the siblings with Mr. Deranian. The siblings, on the other hand, have a strong feeling that Mr. Deranian isn’t really their uncle, but what choice do they have but to go along with him?

Mr. Deranian drives them to Mr. Bolt’s residence saying that that’s where he works and that Mr. Bolt has provided private quarters for the siblings already. When they arrive, the siblings realize that the mansion is the same mansion that Tony drew earlier and that there are barking dogs on the property much alike the ones they’ve been hearing recently.

But, the kids soon forget their suspicions when they see the spacious rooms made for them filled with a plethora of toys and other oddities. They even have a bunch of marionettes which they “bring to life” via playing a harmonica.

Unbeknownst to them, though, Mr. Bolt has hidden cameras installed all throughout their rooms, so he can see the paranormal activity that they’re up to in there.

But not long after, Tia starts to get a bad feeling about Mr. Bolt and that he’s never gonna let them leave, so she and Tony run away one day. Once they realize they’re missing, Mr. Bolt and Mr. Deranian go off after them with their men while also informing the police about their escaped children. The siblings, on the other hand, manage to escape being detected by sneaking aboard a motor home unbeknownst to the driver, Mr. O’Day.

Mr. O’Day, played by Eddie Albert, is the stereotypical crusty, grumpy, elder man who is all bark, but not bite. While driving along his way, he soon discovers the two kids in the back of his motor home. He appears angry at first and wants them to leave, but his kind heart gives in and he decides to fix a meal for them first. During the meal, they tell him their story.

He, of course isn’t too convinced of it in the beginning, but when the kids use their paranormal powers to get his motor running after he loses his keys, he’s convinced and agrees to take them where they want to go.

“Where do they want to go?”, I hear you ask. Well, Tia owns this case with a picture of a star on it and it’s something she’s owned for as long as she can remember. Recently, the case was damaged revealing a hidden map underneath the star picture. The map shows of a place called Stony Creek. So, the kids want Mr. O’Day to take them to this Stony Creek with the hope that it has something to do with their past, the past that they can’t remember.

The majority of the rest of the movie features the trio heading to Stony Creek while trying to evade Mr. Bolt, Mr. Deranian, the cops, and even an angry town mob. The kids discover that Mr. O’Day always appears grumpy since the death of his beloved wife years ago, but the kids seem to melt his heart somewhat and he starts seeing the kids as his own, i.e. the kids he’s never had.

And little by little, Tia’s memory seems to get better and she remembers more about her and Tony’s past: She remembers being in the water and being saved by someone. As the days pass, she and Tony finally remember the full truth. Are you ready for this?

Well, Tia and Tony are actually extraterrestrial beings! Yep, they came from another planet along with a group of others like them via spaceships. Their planet was dying and they needed somewhere new to live. Sadly, the spaceship that the kids were traveling on crashed into the sea and many of their kind aboard died. Luckily, their uncle named Uncle Bené, played by Denver Pyle, rescued them.

And apparently, they got separated from him only to be found and adopted by the Malone family. So, this explains why they have paranormal powers! But, where’s the rest of their kind? Apparently, there’s a mountain near Stony Creek called Witch Mountain which is said to be inhabited by witches. But, we all know what’s really going on there. Yep, Witch Mountain is where Uncle Bené and the rest of his kind have been living for years and waiting until they could find the kids.

In the end, Mr. O’Day manages to get the kids to Witch Mountain where they’re reunited with Uncle Bené. He thanks Mr. O’Day for all he’s done for the kids and even mentions that there are more kids who were lost over the years, all with star cases and hidden maps. Mr. O’Day says that he’ll keep an eye peeled throughout his life and bring any remaining kids he finds back here.

And the movie ends with Uncle Bené taking Tony and Tia away on his spaceship while Mr. Bolt and Mr. Deranian look on, thereby eradicating their desire to further pursue the kids!

And that was Escape to Witch Mountain!

What to say about this movie? It’s not perfect. There are too many plotholes. If this alien race is so advanced, why couldn’t they find all these missing kids themselves? Why was a map included in the star case only to be discovered after somebody damaged the star case? What if somebody never damaged the star case? Would they have spent their whole life without knowing where they came from? How does Tia just randomly start remembering her past bit by bit whilst it seems that nothing is the catalyst in making her remember? And much more!

Yet, even with all its plotholes, this is a movie that you can’t hate. The characters are likable. The actors are pretty good. Well, the kids aren’t all that great, but they’re trying their best. Now someone will probably ask why I commend these kids for trying their best whilst I didn’t commend Josh Hutcherson in Bridge to Terabithia for trying his best? Maybe it’s because he was older and I expected more from him, I dunno.

The special effects are the Disney effects you expect to see with people flying in the air, things moving under their own power, etc.

All I can say is, this movie deserves to be seen and its charm covers up any and all jarring plotholes it may have. 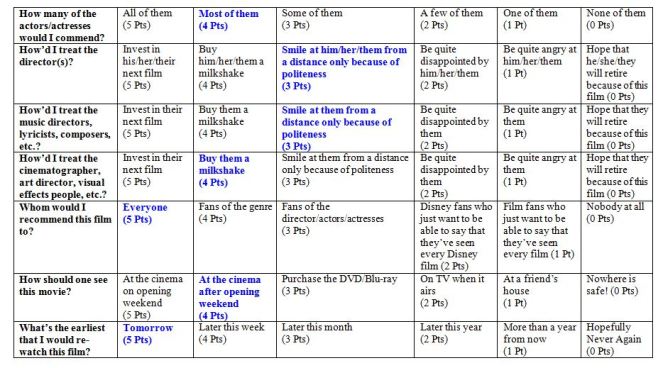 The next review will be posted on October 27th.