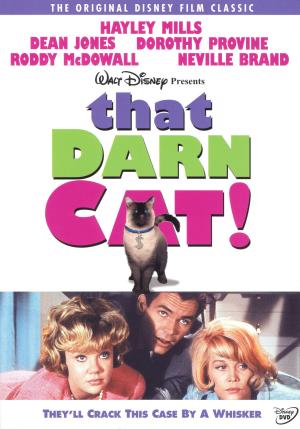 Directed by Robert Stevenson, That Darn Cat! proves to be an interesting entry in the live-action Disney films lineup. It was Disney star Hayley Mills’ last of six films she made for Disney (not counting future TV sequels) as well as future Disney star Dean Jones’ first of ten films he would make for Disney (again not counting cameo appearances in future remakes). But is that the only thing the film should be noted for or is it actually worth remembering for its quality? Let’s take a look at That Darn Cat!!

As the film opens, we see a Siamese tomcat prowling the streets at night while the mellifluous Bobby Darin sings the Sherman Brothers-written titular song about the feline.

The cat, known as “DC” (“Darn Cat”), spends most of the night exploring various places even causing mischief in some locations. He soon walks into a shabby apartment building wherein two bank robbers are hiding. The calm, but lethal leader, Dan, played by Neville Brand, and the impetuously dangerous, Iggy, played by Frank Gorshin, have just stolen $160,000.

They have also kidnapped one of the bank tellers, Ms. Margaret Miller, played by Grayson Hall, and are holding her as hostage in the apartment room that they’ve rented. The police are currently on the lookout for both her and the bank robbers.

While Iggy is happy to do away with Ms. Miller right away, Dan promises her that nothing will happen to her as long as she does what they say. Unbeknownst to them, she manages to replace DC’s collar with her own wristwatch wherein she begins to carve out the word, “HELP”, but doesn’t complete it. She then lets DC back out into the streets hoping someone will find the wristwatch around his neck and rescue her.

So where exactly does DC reside? He’s not really owned by anyone, but lives mostly with the Randall sisters, the elder Ingrid, played by Dorothy Provine, and the younger Patti, played by Hayley Mills. Their parents are out vacationing at the moment, so they have the house to themselves.

Both are currently dealing with boy problems as well. Patti spends a lot of time with Canoe, a young surfer-obsessed, motivation-lacking, but well-intending boy, played by Tom Lowell. On the other hand, Ingrid is forced to be nice to and tolerate the pushy “besottedness” of her neighbor, Gregory Benson, played by Roddy McDowell, because he is her ride to work each morning.

That night, while both are criticizing each others’ boys, Patti notices that DC has returned home with a wristwatch around his neck. As she inspects it, she notices the “HE” and what appears to be an “L” carved onto the metal piece. Having heard about the bank robbery and kidnapping on TV, Patti jumps to the wild, but correct, conclusion that this must be a cry for help from Ms. Miller. Ingrid sees, although incorrectly, the ridiculousness of this theory and tells Patti to let it rest and to definitely not get the police involved. Patti promises…and instead goes to see the FBI the next day when Ingrid goes to work.

She manages to sneak past the receptionist (some security!) and sits by the desk of an FBI agent whom she feels has a “nice face”. Zeke Kelso, played by Dean Jones, is at first confused as to who this girl is and how she got to his desk, but after seeing the watch, he starts to suspect something. He doesn’t quite believe in Patti’s story 100%, but he believes the watch definitely means something. After speaking with his boss, Zeke is assigned to set up headquarters at the Randall house while having a few agents trail DC at night with the hopes that the cat may return to the location whence he got the watch collared onto him.

Patti, excited for an actual FBI operation to be taking place in her house, lets Zeke set up in and use Ingrid’s bedroom without consulting her. The operation must be secret, of course, so Patti also has to prevent a nosy Canoe from entering the house.

The first night, Zeke’s men trail DC all across town in what turns out to be a very funny stakeout while he communicates with them via radio from Ingrid’s bedroom. By now, Ingrid has returned home and is appalled to find a man in her bedroom. Patti does a really horrible job of explaining the situation to Ingrid (by not explaining) and Zeke’s stakeout turns out to be a bust when the cat returns home.

Zeke convinces his boss for one more try. This time he won’t overcrowd the cat with agents and instead puts a radio transmitter in DC’s collar. The next night, Zeke follows the cat himself which also leads to a very funny scene at a drive-in theater! However, this also leads nowhere and the case is called off.

Unhappy with this decision, Patti decides to call the FBI anonymously the next day pretending to be a person who sold Ms. Miller her watch. She even ropes in her local jeweler, Mr. Hofstedder, played by Ed Wynn, to back her up on this.

So now that there’s “proof” that the watch belongs to Ms. Miller, the case is back on! Zeke tries once more to tail DC and finally, DC leads him straight to the bank robbers. Zeke captures them (not without a fight) and DC is a hero in the newspapers! Zeke starts dating Ingrid and Patti and Canoe start seeing each other again.

And that was That Darn Cat!. I quite enjoyed it as I found the story to have a very creative premise: What would you do if you were held hostage and needed to seek help surreptitiously? The performances by almost all the actors, especially Dean Jones, is very commendable and an absolute joy to watch! And the Sherman Brothers’ song is as good as you’d expect and only made better by Bobby Darin himself singing the tune!

Also, while Hayley Mills performed the character great, her character was so annoying and selfish! From not explaining things when she easily could to concocting lies to get the outcome she wants, it’s just a hard Hayley Mills character to root for!

Other than that, it was a pretty enjoyable flick that I think more people should check out! Now I just gotta see what the remake is like!