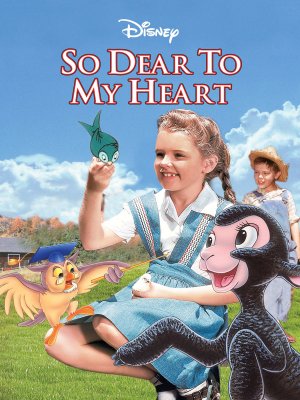 While Song of the South may be more famous (or infamous), it wasn’t the only live-action Disney film of its time to feature animated segments within it. The 1948 film, So Dear to My Heart, would be another example of this type of film from Disney. Is the film any good or is better left obscure? Read on to find out what I think!

As the credits roll, we are treated to a scrapbook whilst the title song plays in the background.

The film then takes us to a small town in Indiana where a young boy named Jeremiah Kincaid, played by Bobby Driscoll, lives. Some of the film is narrated by the character’s adult self, voiced by John Beal. He tells us a story from his childhood wherein the famous racehorse, Dan Patch, pays a visit to his hometown.

Inspired by Dan Patch, Jeremiah beings dreaming of owning his very own colt one day and raising him to become a champion just like Dan Patch. This dream doesn’t last very long though as his grandmother, Granny Kincaid, played by Beulah Bondi, dismisses the idea.

Granny and Jeremiah live on a farm and are pretty much the only ones there to take care of the animals and do whatever else needs to be done on a farm. There is no mention of Jeremiah’s parents, so I’m assuming they’re dead a la traditional Disney!

Later that night, a new litter of lambs is born, but one of them has black wool rather than white.

Jeremiah soon falls in love with the lamb and begs Granny to let him keep him. Granny tries to reason with Jeremiah by explaining how keeping the lamb as a pet won’t work and will just make things difficult when market time comes, but Jeremiah doesn’t think so.

Eventually, Granny sort of caves in by allowing Jeremiah to keep the lamb and Jeremiah embarks upon a new dream: raising a prize-winning champion lamb!

The owl is voiced by Ken Carson and our first song is called It’s Whatcha Do With Whatcha Got. The song comes about by Jeremiah wondering how to make a small, young lamb into a champion and the song illustrates multiple examples of underdogs defeating stronger adversaries, many of them Biblical.

As the days go on though, the lamb causes damage wherever he seems to be, both at Granny’s house and even in town at the local general store. However, Jeremiah is still set on making his lamb a winner and enlists the help of his Uncle Hiram, played by Burl Ives, to convince Granny to allow him to take the lamb to the county fair.

Uncle Hiram comes over that night to eat, spend time with the family, and sing a song that would appear in a Cinderella remake years later!

But when he tries to bring up the topic of the county fair, Granny turns it down. She says that they can’t afford to travel to the county fair and enter the lamb into a contest nor will she allow Jeremiah to borrow money from Uncle Hiram for this endeavor.

Later on while Jeremiah is still disappointed in this decision, we are treated to our second animated song, Stick-To-It-Ivity. This falls under the category of those Disney songs that tried to teach a particular attitude towards life (such as Fortuosity in The Happiest Millionaire). The attitude taught here is perseverance and examples given include Christopher Columbus proving the world wasn’t flat (which never really happened anyway) and Robert the Bruce leading Scotland to victory!

So Jeremiah perseveres and figures out a way to make his own money by finding a beehive full of honey for the local general storekeeper. Everything’s all set, but on that stormy night, the lamb goes missing in the forest. Unable to find him, Jeremiah starts to sulk and even starts to get upset at God leading Granny to give him a good talking-to.

As you can tell, this movie has that traditional conservative Americana feel to it with Granny being a God-fearing Christian woman as well as references to David, Joshua, and Jesus featuring in the film.

After thinking about things all night, Jeremiah manages to find his lamb the next day and surprises everyone by saying he’s not going to the county fair anymore. When asked why, he said that he promised God that if he found the lamb, he wouldn’t take it to the county fair. Impressed by Jeremiah’s “Godly vow”, Granny lies and says how she also made a vow that if the lamb was found, they would go to the fair. And seeing as she “knew God” longer than Jeremiah, her vow takes precedence much to the joy of young Jeremiah!

This leads us to our final animated song in the film, County Fair, about…well, the county fair!

Jeremiah and his Granny go to the fair, but sadly the lamb doesn’t win the award. However, Jeremiah is given a special award of merit by the head judge, played by Harry Carey, for his love of his lamb.

The film ends with Jeremiah and Granny returning to a rejoicing town. And that was So Dear to My Heart!

What can I say? It’s a decent enough film that although slow-paced, doesn’t feel boring or out-of-place because its main aspects (the conservative Americana lessons, the rural America, etc.) match the pace of the film perfectly. Beulah Bondi gives a wonderful performance and even Bobby Driscoll can get real expressive at times. Burl Ives pretty much played his jolly self and could have been more of a character than he was. Oh, Luana Patten is also in the film, but I didn’t feel she needed to be mentioned.

The animated song sequences were surprisingly good (man, do I want an animated Robert the Bruce film!) with a couple of the songs still stuck in my head!  All in all, if you wanna watch an “old-timey” Disney film, this isn’t a bad one at that. 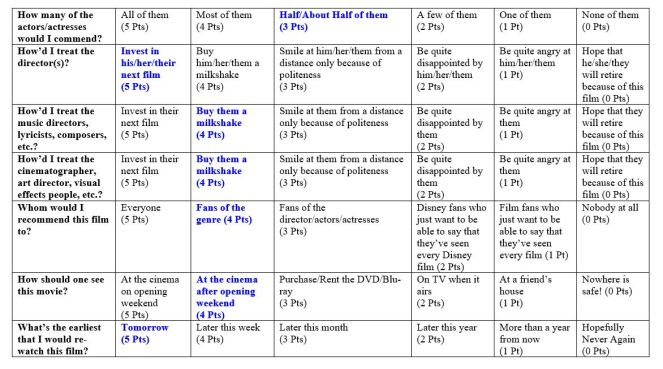