The Muppets never appeared in a theatrical film since the 1999 film, Muppets in Space. So when the news was released that the Muppets were gonna be in a new theatrical film in 2011, we were all super excited to see them again on the big screen! Did the film meet our expectations or was it a disappointment? Let’s find out via my review of The Muppets!

They have grown up close all their lives and share many interests such as their love for the Muppets, having discovered them via The Muppet Show. Walter, more so, has become the devoted fanboy of the group even though it’s been years since the Muppets were together or put on a show.

One day, Gary invites Walter to go along with him and his girlfriend, Mary, played by Abigail Adams, to Los Angeles. The couple was going to celebrate their 10th anniversary of dating, but with Walter along, they make sure that they spend some time visiting the old Muppet Theater for the Hollywood tours that are provided there.

The Muppet Theater has since been bought by the greedy oil magnate, Tex Richman, played by Chris Cooper. While on the tour, Walter overhears from Mr. Richman that he’s planning to destroy the Muppet Theater as there is oil underneath.

Shocked by the news, Walter tells Gary and Mary and they all decide that they need to find Kermit the Frog and let him know what Mr. Richman’s plan is. The trio drives all night long until they come upon Kermit’s house and upon the frog himself, Muppeteered by Steve Whitmire. Kermit welcomes them into his house and soon learns the truth about Mr. Richman from them. Walter informs Kermit that if they can raise $10 million by an upcoming date, they can purchase the Muppet Theater before their contract expires! The only way they can raise so much money is for the Muppets to band together again and host a telethon.

After some ruminating, Kermit agrees to the idea and he, Walter, Gary, and Mary go about the country rounding up the other members of the Muppets to save their theater. Wait…why does this sound so familiar?

Most of the gang is happy to see Kermit and agrees to come together again and host the telethon. They were happy to leave their previous jobs (Fozzie Bear was performing in a cheap motel, Gonzo was selling toilets, Animal was part of an anger management/zen meditation group, etc.).

The last Muppet they visit is Kermit’s old beau,Miss Piggy, Muppeteered by Eric Jacobson. Miss Piggy works as a fashion editor in Paris, but she doesn’t want to get back together with the Muppets, or in essence, with Kermit.

The Muppets then plan to do their telethon without Miss Piggy. They go to different TV networks to sell their idea, but none will take them. They get lucky when a previous show is cancelled at a network run by Veronica, played by Rashida Jones. She allows them to fill the time slot as long as they can get a celebrity host. The Muppets agree to this!

Afterwards, the Muppets (along with Walter, Gary, and Mary) do their best to fix up the theater and practice their performances before the telethon. They kidnap Jack Black to be their celebrity host (as nobody else would come) and allow Walter to join them on stage. Gary and Mary’s relationship is strained when Gary starts to neglect her a bit for Walter and the Muppets. And eventually, Miss Piggy decides to come back for the telethon!

Soon enough, the night of the telethon is upon everyone. The Muppets perform while multiple celebrities man the telephones to collect the incoming donations. But, Mr. Richman sabotages the show before the Muppets are able to raise enough money to save the theater.

Everyone is saddened, but the Muppets realize that coming back together as a family was the more important thing. They accept Walter as a Muppet and Gary patches things up with Mary and proposes to her. Everyone learns the truly important lessons from this event and they all go about living their lives normally despite the theater setback.

Nah, of course it won’t end that way. The movie ends with Mr. Richman getting a head injury which causes him to give back the Muppet Theater to the Muppets out of his own good will.

And that was The Muppets! And it was…disappointing. It was basically The Country Bears, but a bit better. The film focuses too much on just getting this telethon ready that I feel we never really got to know many of the characters. All the humans seemed like archetypes (Gary was your generic lead, Mary was your generic girlfriend, Mr. Richman was your generic bad guy, etc.) and most of the Muppets didn’t have enough screen time to really get to know them.

The ending was too much of a deus ex machina, even for the Muppets. And whilst there were many musical numbers in the film such as Life’s a Happy Song, Pictures in My Head, Me Party, and Man or Muppet, none of them are really any good.

There were some good cameos though such as Emily Blunt, Neil Patrick Harris, and Dave Grohl. But, other than that, the big Muppets comeback film was just disappointing! If this was your introduction to the Muppets, I’m really sorry! 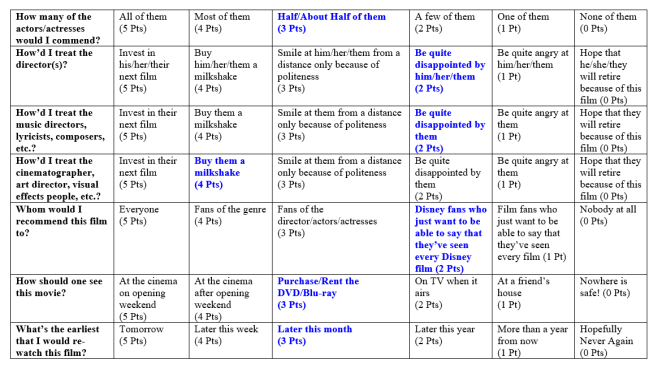