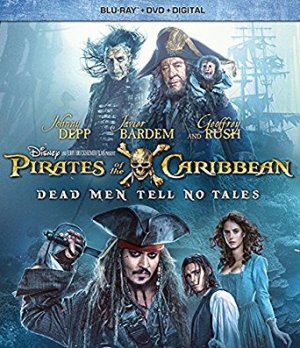 Alright, how many people were honestly asking for a fifth one of these?

I guess I don’t need to introduce this franchise as everyone in the world pretty much knows about it! But, I never imagined that we would be getting a fifth Pirates of the Caribbean film! Is it good like the first film, ok like the second, or more along the lines of the third and fourth? Let’s take a look at Pirates of the Caribbean: Dead Men Tell No Tales!

The movie opens with a young Henry Turner (son of Will Turner from the previous films) heading to the bottom of the sea to meet his father.

Will Turner, played by Orlando Bloom, was cursed at the end of the third film to be the captain of the Flying Dutchman, a ghostly ship that can only surface every so often. Henry has since been studying pirate legends and lore to find a way to break this father’s curse and he believes he’s found the answer: the Trident of Poseidon. The Trident of Poseidon is said to be able to break any curse, but Will Turner doesn’t believe that it exists and warns Henry from even seeking Captain Jack Sparrow’s help to find it. He then tells his son to go back home before the ship sinks again.

Cut to nine years later, Henry is now older and played by Brenton Thwaites. He is currently a member of the British Royal Navy and is aboard a ship headed for the cursed area known as the Devil’s Triangle. He tries to warn his captain that the area is cursed, but the captain doesn’t believe in superstitions and heads forth anyway.

This proves to be disastrous as the British ship is attacked by a ghost ship with a ghostly crew led by a Captain Armando Salazar, played by Javier Bardem. Captain Salazar kills everyone on the ship except for Henry as he finds a poster of Captain Jack Sparrow in Henry’s possession. It appears that Captain Salazar has some previous dealings with Jack Sparrow that resulted in him and his crew being trapped in the Devil’s Triangle. So, Captain Salazar tells Henry to go find Jack Sparrow and pass on the message to him that Captain Salazar is coming for Jack once he’s able to leave the cursed area.

But, where is Jack Sparrow anyway?

It appears that he on the island of Saint Martin about to rob a new bank that has just been founded there. He is played once again by Johnny Depp and utilizes his crew and horses to literally run through the city pulling the bank behind them in a creative action sequence.

This effort ends in failure though and Jack’s crew decides to leave him, including Gibbs, played once again by Kevin McNally. It seems that Jack Sparrow has lost his “Jack Sparrow-ness”, so much so that he even trades his beloved magical compass for a drink. It turns out giving up the compass was what breaks Salazar’s curse and he and his ghostly crew are now free to find Jack Sparrow and kill any pirate they come across along the way.

Jack Sparrow is later captured by the government on the island and is sentenced to hang alongside a young astronomer woman, Carina Smyth, played by Kaya Scodelario.

Carina is being hanged because people think she is a witch since she knows so much about astronomy and science, things women shouldn’t know about. Fortunately, Henry Turner is also on this island and convinces Jack Sparrow’s men to help rescue Jack. They “launch an attack” and in the end, rescue Jack and Carina and all head to Jack’s temporary ship, the Dying Gull, and go out into the ocean.

So why exactly does Henry save Jack and Carina? Well, Henry is still after the Trident of Poseidon to free his father and needs Jack’s help to find it. He also needs Carina’s help to find it as she has a diary from her long-lost father that can help. Basically, there’s a map hidden in the stars above that “no man can read” and will only appear during a blood moon which will occur in the next couple of days. And since Carina is an astronomer and a non-man, i.e. a woman, she is the only one who can read it.

Carina doesn’t believe in curses and superstitions and instead believes in science, but she’s still willing to help so that she may discover who her father was. Jack also reluctantly gives in especially after learning that Salazar is after him. Apparently, Salazar used to be a member of the Spanish Navy who wanted to rid the world of pirates. But, he was tricked by a young Jack Sparrow to enter the Devil’s Triangle causing him and his crew to be cursed there as ghosts.

Meanwhile, Captain Barbossa, played once again by Geoffrey Rush, soon enters the picture. He’s a rich pirate now enjoying the fine pleasures of life, but is soon forced by Salazar to lead him to Jack Sparrow after Salazar destroys his fleet. Barbossa has no choice, but to obey and they soon catch up with Jack and the gang. At first, they send ghost sharks after them.

As Jack and his gang escape further into the island, Barbossa rescues them and explains what’s going on. He returns Jack his compass that he retrieved for him and they then get Jack’s old ship, the Black Pearl (which has been in a bottle since the last film), back to normal size.

Barbossa then takes control of the Black Pearl and via Jack’s compass, they head towards the Trident of Poseidon. Along the journey Barbossa realizes that Carina his daughter, but doesn’t tell her! They soon come across the island where the Trident of Poseidon is located and Carina realizes that the rock formations on the island are an exact image of the stars in the sky and that one star is missing!

This leads to finding the Trident of Poseidon underwater. Captain Salazar also finds his way down here and a fight for the trident begins. In the end, they realize that the way to break every curse is to break the trident. This causes Salazar and his men to regain their manly features, but it also causes the water to come down upon them drowning them! Jack and the others manage to escape in time, except for Barbossa who sacrifices his life for Carina after she finds out that he was her father.

Jack and the others aboard the Black Pearl have a moment of silence for Barbossa and then head back home. Carina has become a believer in magic after witnessing so much and she and Henry have fallen for each other. Henry takes her back to meet his mother, Elizabeth Swann, played once again by Keira Knightley. Also, since all curses are broken, Will Turner is able to come back home and reunite himself with Elizabeth and Henry. Jack watches all this from afar, then heads out to sea for further adventures.

The film ends with a post-credits scene that suggests that Davy Jones (from the second and third films) may be back. Does that mean we’re getting a sixth Pirates of the Caribbean film?

And that was Pirates of the Caribbean: Dead Men Tell No Tales! So, is it as good as the first film? No. Is it as ok as the second film? No. Is it more along the lines of the third and fourth films? Yeah, pretty much.

It’s not horrible or anything, but it’s an incredibly serviceable film. The plot, although seemingly straightforward is quite convoluted (like why the heck does everyone want the Trident of Poseidon? and why does giving up the compass break Salazar’s area confinement?).

Henry Turner was a pretty boring character that didn’t do all that much and the effects of Salazar seemed off-putting and fake. There also was a lot of filler in this movie which is saying something since this is the shortest Pirates of the Caribbean film!

But otherwise, the overall cinematography and other special effects were well-down and captured the Pirates of the Caribbean feel. The action scenes were a delight to watch and were very creative! Johnny Depp and Geoffrey Rush gave great performances whereas Javier Bardem and Brenton Thwaites were serviceable. Kaya Scodelario was trying, but I wasn’t fully convinced of her performance.

All in all, it’s basically everything you would have expected a fifth Pirates of the Caribbean film to be like. It’s not horrible, it’s not good, it just…is. 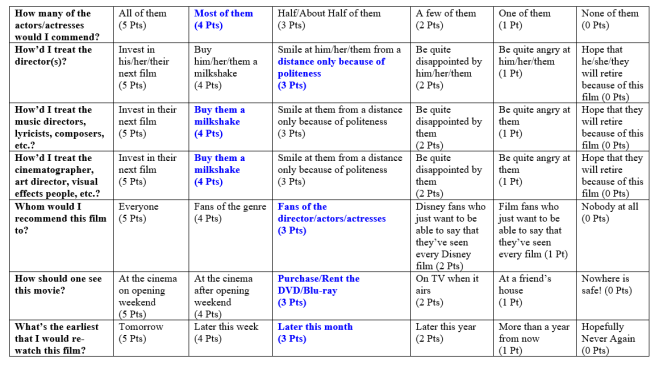