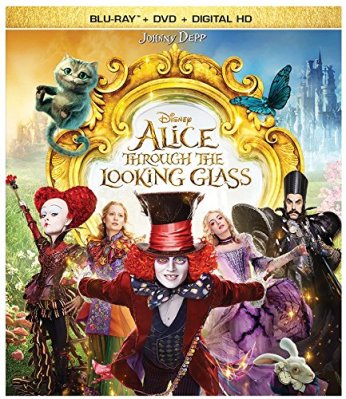 As you all know, I wasn’t really a fan of Tim Burton’s Alice in Wonderland. I couldn’t fathom how that movie garnered over a billion dollars at the worldwide box office! But, it was no surprise to me that Disney decided to make a sequel to the film.

Released 6 years later, the sequel couldn’t compete at all with its predecessor and underperformed at the box office. I hoped that this would halt Disney’s plans on remaking more of its animated films!

Anyway, I eventually saw this film. Is it as bad as people say it is? Or does it have some level of goodness to it that’s been overlooked? Get your looking-glasses handy and let’s take a look at Alice Through the Looking Glass together!

The movie starts aboard a British ship captained by Alice Kingsleigh, played once again by Mia Wasikowska. They’re currently being chased by some Malay pirates and she gets herself and the crew to safety by “leaning towards the good side”.

When she arrives back home after…a long time, she reunites with her mother and learns a few things. Lord Ascot from the previous film has died by now and her father’s company is now run by his son, Hamish, played again by Leo Bill, who was Alice’s former fiance in the previous film.

Anyway, Alice’s home is kinda in the hands of Hamish and the company. The only way to get it back is for Alice to sell Hamish her ship and for her to work as one of his clerks. Alice’s mother wants her to do this: to give up being a captain and take on a sensible profession. Alice, however, is appalled at the decision she has to make and feels that Hamish is doing it to spite her after she rejected his marriage proposal.

At a posh party at Hamish’s mansion, she runs off to have some alone time to think about what she’ll do and comes across her old butterfly friend, Absolem, voiced by the late Alan Rickman. She’s happy to see him as he leads her to a room in the mansion and flies through a looking-glass. Besides a few more lines, that’s pretty much all we see or hear of Absolem in the movie. Whether or not this was affected by the death of Alan Rickman, I’m not sure.

Anyway, Alice follows suit and realizes that the looking-glass is actually a “window” between her world and Underland.

as well as some old friends.

And without any sort of introductory remarks, the Underland folk immediately tell Alice that they need her help! You see, the Mad Hatter, played once again by Johnny Depp, has been incredibly down and depressed lately, almost to verge of dying. What caused this deterioration of health? Well, he apparently found a piece of a hat that he made when he was a young boy in the forest where his family was supposedly killed. Now he thinks that the hat is proof that his family is actually alive! Alice tries to make him see that this doesn’t change the fact that his family is dead, but the Mad Hatter won’t hear of it!

Basically, the only thing Alice can do now to save the Mad Hatter from dying is to go back in time and save the Mad Hatter’s family! There is a sort of time machine called the Chronosphere that she needs to use in order to travel back in time. She is the one who must do this as she’s not from Underland and it’s very dangerous to have someone meet face-to-face with their past self!

The Chronosphere is located in the abode of Time, played by Sacha Baron Cohen. Time is basically in charge of everyone’s life and death in Underland. He has pocket watches that represents everyone’s heartbeats/life spans and when he closes one of them, someone dies.

Anyway, Time is surprised to see Alice there as nobody is really supposed to be there. But, he listens to her plea for the Chronosphere, but refuses to let her use it. This rejection causes Alice to borrow the Chronosphere herself and go back in time!

Meanwhile, the Red Queen, played once again by Helena Bonham Carter , is at Time’s abode too and wants the Chronosphere for herself. She then sends Time to go after Alice and retrieve it from her. (The Red Queen has been pretending to have a liking for Time to get him to give her the Chronosphere.) Time readily agrees because if the Chronosphere isn’t brought back to his abode soon enough, it’ll cause all in Underland to die!

Anyway, Alice arrives back in the past: during the time of a younger White Queen, played once again by Anne Hathaway, and a younger Red Queen. Well, neither are queens at the moment and are princesses known by their birth names, Mirana and Iracebeth, respectively.

Alice befriends a younger Mad Hatter and realizes that he and his family are royal hatters to the parents of Mirana and Iracebeth. The Mad Hatter has made a hat for the Iracebeth, but when people laugh at her, she gets furious which causes the hat to break on her head. Iracebeth’s temper tantrums causes her parents to pass on the crown to Mirana even though Iracebeth was older and next in line for the kingdom.

Meanwhile, the hat breaking (as well as the Mad Hatter laughing due to it) angers the Mad Hatter’s father, Zanik, played by Rhys Ifans. This leads to an argument between the two of them causing the Mad Hatter to walk out on his family! Alice tries to convince the Mad Hatter that he has to go back to his family to prevent the date of their death from happening. But, this proves futile.

Alice also learns of another important date in Mirana and Iracebeth’s past: when they were little girls and Iracebeth had bumped her head on a statue. Alice uses the Chronosphere to go back to this point in time and witnesses Mirana and Iracebeth’s mother making some tarts. She tells her kids not to eat them, but Mirana disobeys and eats them in her room with the crumbs falling near Iracebeth’s bed.

When the mother sees this, she suspects Iracebeth of eating the tarts. She says that Mirana did it, but Mirana denies this, thereby convincing the mother that Iracebeth has lied. Iracebeth runs away crying and bumps her head on a statue. This changed her into the woman we know her as: the woman who hates her sister! And all because of…#Tartgate!

Alice also sees the Mad Hatter as a young boy making a hat to show his father. Zanik doesn’t think it’s proper and throws it in the garbage causing the young Mad Hatter to run off sad. Later though, Zanik picks up the hat from the garbage, smiles, and keeps it in his pocket. That’s when Alice realizes that the Mad Hatter’s family wasn’t killed as that’s the same hat that he found in the forest!

But, before she can head back to the present time, Time catches up with her and tries to catch her and the Chronosphere. She escapes by walking through another looking-glass and is back in Hamish’s mansion. Disarrayed from all the time traveling, the people at the mansion have her sent to a mental asylum.

She manages to escape from the asylum with her mother’s assistance and returns to Underland via the looking-glass in the mansion. So basically that whole plot point went nowhere, huh?

Anyway, she uses the Chronosphere one last time to the fateful day where the Mad Hatter’s family was supposedly killed. There she sees how the Red Queen actually shrunk the family and kept them in a little ant farm-kinda thing, so they’re still alive!

Alice heads back to the present time and tells the dying Mad Hatter how she now believes in him and that his family is alive! This vote of confidence gives him the strength he needs and the Mad Hatter is completely cured! He then goes along with Alice and the other Underland characters to the Red Queen’s lair to find and free his family.

The Red Queen captures the intruders though and jails them all except the White Queen. She then takes the Chronosphere and heads back in time with her sister to the infamous #Tartgate day. Unfortunately, in her rage, she lets her past self see her present self and everything starts to rust!

Quickly, the White Queen uses the Chronosphere to head back to the present time with her sister. Alice and the other Underlanders have escaped from their jail and everyone’s back at Time’s abode. They all try to get the Chronosphere in place to save their world from being destroyed, but it’s too late as they all end up rusting before that can happen!

Alright, that’s not how it ends. Somehow a light spark (of hope, I guess) causes the Chronosphere to mesh with the Grand Clock in Time’s abode which un-rusts everyone and saves Underland! Mirana apologizes to the Red Queen about #Tartgate and the Red Queen accepts saying that that’s all she ever wanted.

The Red Queen uses one of those “Eat Me” foods to make the Mad Hatter’s family big again. The Mad Hatter is reunited with his family and Zanik tells him how proud he is of his son. Since Alice’s work is done, she heads back to her world and tells her mother that it’s okay to sell the ship. But, the mother has changed her mind (maybe from seeing her daughter’s bravery at the asylum) and lets Hamish keep their house. She then joins her daughter on future sea voyages.

And that’s Alice Through the Looking Glass. So, is it bad? Yes, yes it is.

The main problem with it is that it’s a stupid pointless story to tell! There’s no reason for the Mad Hatter’s family to become the main focus of this film! And the whole #Tartgate incident being the catalyst of the Red Queen’s hatred is just stupid and goes against the continuity from the first film!

None of the acting is amazing, although some do try such as Johnny Depp, Helena Bonham Carter, and Sacha Baron Cohen. None of the others’ acting is anything to talk about, especially Mia’s who gives us the same kinda-unsure performance from the first film.

The only good thing I can say about this film is that it has some amazing, intricate visuals! This alone will give this movie points over its predecessor and save it from a dreaded F-rating! Don’t get me wrong, it doesn’t make the film good, but just look at this intricateness. 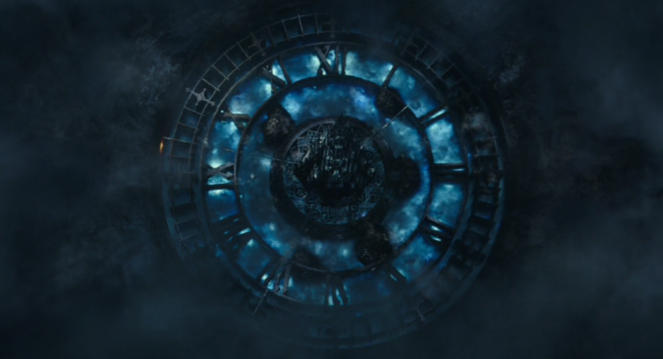 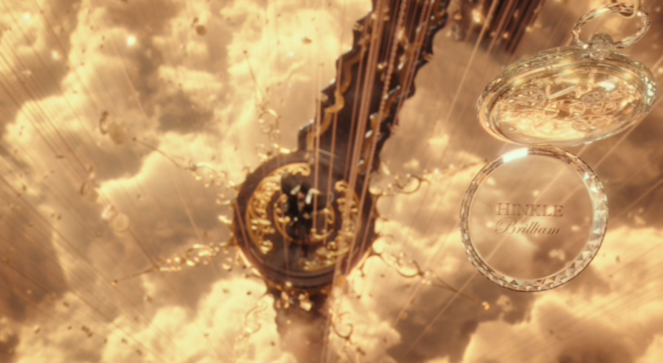 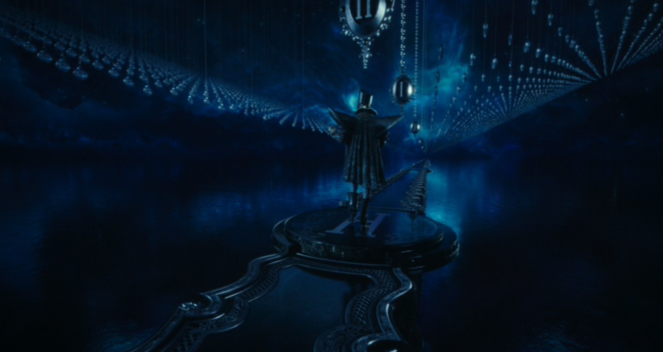 Summing up, this film is bad, but sadly won’t stop the Disney remakes from happening. If you can skip this film, you’re doing yourself a favor! Read the books instead!

The next review will be posted on December 5th.