Jack Sparrow is back in this third installment of the beloved franchise, Pirates of the Caribbean. This film was actually filmed alongside the second one and follows it nigh immediately. So, I recommend for you to read my Pirates of the Caribbean: Dead Man’s Chest review first before reading this one (if you haven’t done so already), because I’m not going to go over things that I’ve already gone over in that review.

With that out of the way, let’s take a look at Pirates of the Caribbean: At World’s End!

The film opens up to a royal declaration forbidding piracy and sentencing anyone who’s guilty of the crime of piracy or even aiding a pirate to death by hanging.

After that opening scene, we cut to a very gritty Singapore ruled by the Pirate Lord, Sao Feng, played by Chow-Yun Fat. Captain Barbossa, Elizabeth Swann, and Will Turner played again by Geoffrey Rush, Keira Knightley, and Orlando Bloom, respectively, have traveled there to ask a favor of Sao Feng.

Captain Barbossa tells Sao Feng that they want to borrow a ship and a crew from him so that they can rescue Jack Sparrow from Davy Jones’ Locker as the time to convene the Brethren Court has arrived. The Brethren Court is a court consisting of the nine pirate lords who meet every so often when trouble arises to discuss matters. This time, they need to discuss their future as they know that the British government is out to get them in their mission to end piracy once and for all. But, the Court can’t convene unless ALL nine pirate lords show up including Sao Feng AND Jack Sparrow. At first, Sao Feng isn’t too fond of this idea and refuses.

But when the British Army stage a surprise attack on Singapore, Sao Feng agrees to Barbossa’s requests.

Meanwhile, Lord Beckett, played again by Tom Hollander, along with the British Army manage to take over Davy Jones’ ship by bringing his heart from the 2nd movie aboard. That way, Davy Jones, played again by Bill Nighy, becomes a slave to the British and has to do their bidding which includes taking over the seas for business and ridding the world of piracy.

Going back to our protagonists, they manage to find Davy Jones’ Locker, by literally falling off the edge of the Earth.

Once there, they quickly find Jack, played again by Johnny Depp. Davy Jones’ Locker isn’t so much a place of punishment with physical torture, but it’s more like solitary confinement that causes the prisoner to start losing his mind and hallucinating, which is exactly what happens to Jack.

He even begins to think that Barbossa and the lot who have come to rescue him are just hallucinations until they convince him otherwise. After that business is settled, they all head back, but the problem with getting back is that it’s not entirely easy. Clues on the navigational charts tell cryptic tales, but Jack soon figures it out that they have to literally turn their ship upside down at sea and then back up again to go back to the world of the living.

When they make it back to the real world, Sao Feng shows signs of treachery and isn’t willing to go to the Brethren Court. In an effort to persuade him, Barbossa tells Sao Feng about one more reason why the Brethren Court have to meet: Calypso!

Actually, Calypso was a goddess back in the day and the lover of Davy Jones before he became all be-tentacled. But Davy Jones double crossed her by convincing the first Brethren Court to trap her in human form and even showed them how to do it. Now, Barbossa wants this Brethren Court meeting to free Calypso in an effort to help their cause. This gets Sao Feng thinking and he assumes that Elizabeth is actually Calypso in human form.

He gets her alone and even kisses her until he is killed by another surprise British attack. Before he dies, he passes on his title of Pirate Lord to Elizabeth and tells her to take his place in the Brethren Court. Even our friend, Norrington, played briefly once again by Jack Davenport, dies during one of these action scenes after finally getting to kiss Elizabeth. Wow, how many men want/kiss her in this movie?! Will, Jack, Sao Feng, and now Norrington! I wish I was that desired by the ladies! That must feel so awesome! Anyway enough of my lack of self confidence!

Once the pirates finally meet at the Brethren Court (the 4th, to be presice), they agree (after persuasion by Elizabeth and Jack) to fight Beckett and his navy. The last third of the movie is basically just everyone fighting everyone so I’ll just sum up what happens:

Tia Dalma, played again by Naomie Harris, is discovered to be the real Calypso and is freed from her human form,

Will and Elizabeth get married by Barbossa while fighting off Davy Jones’ men,

Will stabs Davy Jones’ heart killing him and making Will the new Captain of the Flying Dutchman thereby freeing all the crew including his father who decide to still sail for Will, this time out of choice,

and Barbossa and the crew go off to search for the Fountain of Youth without Jack Sparrow until they realize that Jack Sparrow has the map.

And that was Pirates of the Caribbean: At World’s End, the final film in the trilogy.

What to say? If you thought the second film had an overly complicated plot and a long running time, then you’re wrong as this film has that one trumped! That’s the biggest problem with this movie: the film is just too darn nigh incomprehensible! That, and it’s too darn long! And these are two problems that drag the film down to the depths of the ocean that even its good points (like the acting and the gorgeous visuals and cinematography) can’t even resurrect.

Watch it if you want to watch all the films in the series, but don’t expect a masterpiece! 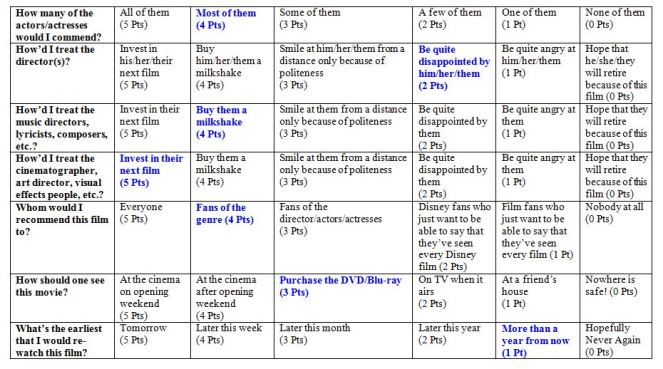 The next review will be posted on August 4th.