Apparently Stargirl was either popular or successful enough to warrant a sequel. However the sequel film (again directed by Julia Hart) would not be based on the sequel novel to the original Stargirl. Does this original story help this sequel film or hurt it? Read on for my review of Hollywood Stargirl!

The film begins with our protagonist, Stargirl, played again by Grace VanderWaal, and her mother, Ana, played this time by Judy Greer, leaving Arizona and moving to Los Angeles after Ana gets a costume designing job in a Hollywood film.

Anyway it’s summertime, so Stargirl is on vacation, hence it’s the perfect time for them to move. In Los Angeles, they rent an apartment from a woman named Daphne, played by Nija Okoro. It’s a decent enough apartment that comes with a couple of neighbors including the grumpy retired film producer, Mr. Mitchell, played by Judd Hirsch, who lives downstairs.

While Ana goes to work, Stargirl befriends Daphne’s son, Evan, played by Elijah Richardson. He’s heard Stargirl sing and wants to be friends with her as well as get her involved in a personal project. He and his elder brother, Terrell, played by Tyrel Jackson Williams, are filming a sizzle reel that has the potential for becoming an actual film. Terrell is directing, Evan is writing the script and acting, and they want Stargirl to help them with the music as well as act in the film. Stargirl is excited to be a part of this although she admits she’s never acted before. Evan and Terrell don’t mind since they’ve never written a script nor directed before, respectively.

One night at the bar where Terrell works, Stargirl notices a woman there named Roxanne, played by Uma Thurman. She used to be a big singer back in the day and one of her songs, Miracle Mile, is beloved to Stargirl as well as her mother. Sadly, Roxanne hasn’t recorded anything since and is basically a washed-up musician now.

Stargirl introduces herself to Roxanne and asks her permission to use her song for their sizzle reel. Roxanne doesn’t allow them to use it, so Stargirl ends up having to create an original song all by herself for the sizzle reel. After hearing Stargirl’s song, Roxanne later uses her influence to have Stargirl and the boys record the music at a proper recording studio. She also says that the reason she didn’t give them permission to use her song wasn’t because she was mean; rather it was because she knew Stargirl could write something original herself.

Stargirl, Evan, and Terrell continue to work on the sizzle reel. Eventually Stargirl gets on Mr. Mitchell’s good side as he offers her an old movie camera of his that they can sell and use the money to buy enhancements for their iPhone that they’re filming on. Eventually, the sizzle reel is complete and Terrell, Evan, and Stargirl submit it while anxiously awaiting to hear back from producers.

By this time, Evan and Stargirl, having been attracted to each other since day one, are officially boyfriend and girlfriend. And to top it all off, they hear back from a producer, Priya, played by Sarayu Blue, who wants to turn their sizzle reel into a feature film.

Stargirl’s happiness doesn’t last forever though as her mother loses her job after the film’s production shuts down due to the director’s behavior. Ana tells Stargirl that she has a job offer in another city, so they’ll have to move. This is where Stargirl gets uncharacteristically angry at her mother since she’s promised that they would spend at least the entire summer in Los Angeles. Now Stargirl doesn’t want to leave Los Angeles nor does she want to lose the opportunity to make their film a reality. Eventually Stargirl convinces her mother to stay in Los Angeles by convincing her she can get another job in Los Angeles.

So they end up staying in Los Angeles and Stargirl gets to make the film with Terrell and Evan.

And that was Hollywood Stargirl! Um…I’ll be honest; I really don’t know what the point of this film was! The character of Stargirl seems vastly different to her character from the first film that it doesn’t even feel related to the first film at all! There were also story arcs that didn’t seem to go anywhere like Roxanne being a washed-up musician or Ana saying they’re moving only to change her mind shortly afterwards!

While I’m not familiar with the novels, I assume the Stargirl novel sequel kept the character of Stargirl pretty consistent, hence a direct adaptation would have worked better rather than this original idea.

Did I like anything about this film? Well, I thought Judd Hirsch was the best actor of the bunch and both Grace VanderWaal and Judy Greer gave good performances. I could see that Elijah Richardson and Tyrel Jackson Williams were trying, but I wasn’t impressed by Uma Thurman’s performance.

All in all, this film felt like it was made just for the heck of it! And as indicative of this film, that’s very rarely a good thing. 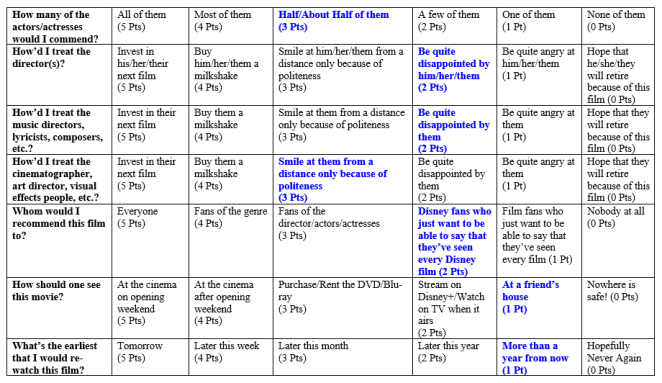