In 1812, author Johann David Wyss, published Der Schweizerische Robinson (The Swiss Family Robinson), a novel about a Swiss family who were shipwrecked Robinson Crusoe-style. The first film adaptation of this novel was in 1940 and after having watched it, Walt Disney decided to make his own film version 20 years later. Directed by Ken Annakin, the Disney film has since been beloved by many and its legacy is present in the Swiss Family Treehouse attraction found in multiple Disney parks. What do I think of the film? Read on to find out!

The film begins with a tempestuous sea storm battering a ship. Due to the storm as well as a previous attack by pirates, the entire crew has abandoned the ship leaving only a Swiss family aboard. The family comprises Father, played by John Mills, Mother, played by Dorothy McGuire, and their three children, Fritz, Ernst, and Francis, played by James MacArthur, Tommy Kirk, and Kevin Corcoran, respectively.

Once the storm subsides, the family builds a number of rafts to head to a nearby island for shelter. The island is uninhabited by humans, but features a plethora of wild animals including an elephant, tiger, snake, ostriches, toucans, etc.

The family realizes that they have to do their best to survive on the island until they’re rescued and taken to the colony of New Guinea, their original destination. They make a makeshift shelter on the beach utilizing supplies they’ve brought over from the ship. However, due to the presence of the dangerous tiger, the family constructs a treehouse with a retractable staircase further in the jungle. They furnish it with everything they can bring over from the ship including a fully functional organ.

While reading one of the geography books from the ship, Ernst comes to the conclusion that this island was once connected via a land bridge between Africa and Asia explaining why there are so many different types of animals on this island.

After originally refusing, Mother finally gives in and allows Fritz and Ernst to sail around the island’s coast in a raft to see if anyone else is on the island. Francis, being too young, stays with his mother and father.

Fritz and Ernst eventually come across another part of the island and see the pirates that attacked their ship earlier. They’re portrayed stereotypically in the “evil Asians” manner and led by Kuala, played by Sessue Hayakawa. They’ve landed on the island and have taken two people prisoner: a Captain Moreland, played by Cecil Parker, and his cabin boy. While the pirates are preoccupied fighting amongst themselves, Fritz and Ernst manage to free the cabin boy. The pirates see them and give chase resulting in them fleeing into the jungle unable to save the Captain.

Fritz, Ernst, and the cabin boy manage to escape the pirates, but now have to head back to the treehouse by land cutting through the island rather than sailing around the coast. The cabin boy at first isn’t willing to accompany the two boys and even threatens them with one of their guns.

After getting the gun out of the cabin boy’s hold, Fritz and Ernst realize that the cabin boy is actually a girl named Roberta, played by Janet Munro. She is Captain Moreland’s granddaughter who cut her hair and dressed her like a boy to protect her from the pirates. Now that her secret is out in the open, the trio ventures forth through the island while dealing with quicksand, battling an anaconda, and even saving a zebra.

Tension builds between Fritz and Ernst due to both of them falling for Roberta. But in the end, the trio manages to reach back to the treehouse in time for Christmas and reunite with their father, mother, and Francis.

Now that the pirates know they are on the island and have Roberta, the next order of business is to protect their treehouse from a pirate invasion. The family lays the island with booby-traps aplenty. Even Francis manages to trap the tiger in a ditch and camouflages the ditch with leaves and branches.

Fritz and Ernst continue to butt heads regarding Roberta although by know it’s clear that Roberta likes Fritz and not Ernst.  Nevertheless, it isn’t long before the pirates arrive at the treehouse and launch an attack on the family. The family fights them off with guns, homemade bombs, and all other weapons they’ve devised. Even Francis’ tiger pit comes to the rescue trapping many pirates and causing many to flee from the tiger.

The pirates finally flee after a ship arrives firing their cannons at them. The ship is captained by Captain Moreland who has managed to escape the pirates and returned with ships and men to launch an attack. He offers to take the family to New Guinea or London or wherever they want to go, but Father and Mother realize that they are happy on the island and don’t want to leave. Fritz also doesn’t want to leave and Roberta wants to stay with him. Francis is too young to go anywhere by himself, so it’s only Ernst who sails to London with Captain Moreland. According to the captain, the island is bound to be inhabited by colonizers soon so the family won’t be all by themselves.

And that was Swiss Family Robinson! Honestly, it’s a decent film and I can see why it’s a beloved classic to many. I personally feel plotwise that the film seems to be telling two different stories: one, a survival story about the family and two, a story about the pirates (who don’t appear in the original novel at all). And I feel this doesn’t work to the film’s advantage. It makes the film seem unfocused and makes it have a runtime of over 2 hours when it really doesn’t need to be so long. John Mills and Dorothy McGuire give great performances while the kids were pretty much what you’d expect from them. All in all, if you’re lenient about the writing, I think you’ll enjoy this film well enough. 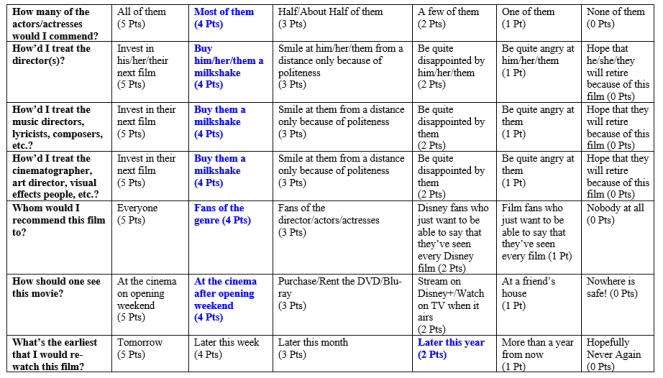