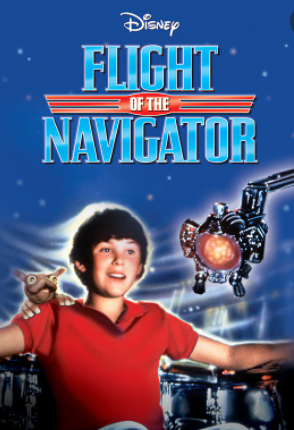 Similar to One Magic Christmas, this film probably doesn’t technically count as a Disney film since it seems that Disney only distributed it, rather than produced it. But since I’m not 100% sure, I’m going to play it safe and review it anyway. Read on for my review of the cult classic, Flight of the Navigator!

Directed by Randal Kleiser, the film takes place in the state of Florida and opens up on Independence Day, July 4, 1978. As the credits roll, we see what appears to be a flying saucer gliding through the skies. But it turns out it’s just a frisbee being thrown at a frisbee dog championship.

The outdoor event is attended by many including young David Freeman and his family. David, played by Joey Cramer, is a twelve-year-old boy doing what twelve-year-old boys do best: enjoying life, crushing on a girl, and arguing with his younger brother, Jeff.

Later that night, David’s mother sends David into the nearby woods to bring Jeff home safely from a friend’s house where he’s gone over to play. Jeff scares David while he’s in the woods and then runs home on his own. David soon follows, but is distracted by an object he sees in a lower area of the woods. As he peers over to get a better look at it while holding onto some vines, the vines snap and he falls to the ground below rendering himself unconscious.

After he regains consciousness, he returns home only to find that his parents aren’t there and that an unfamiliar couple resides there instead. They don’t know how David’s parents are and when he breaks down crying due to the confusion, they call the police hoping they can assist David.

Two police officers investigate David’s information at the police station and are clearly puzzled. They ask him questions such as how old he is, who the president of the USA is, and what the current date is. David is just as puzzled as to why the police officers need him to answer those questions. They end up taking him to a house where David’s parents are living. David is overjoyed to see them at first, but is taken aback when he sees that they’ve aged!

Apparently, the date is now July 4, 1986 and eight years have passed since David fell unconscious in the forest. David has no recollection of eight years passing by nor has he aged at all in eight years prompting his family to take him to the hospital to run some tests.

Meanwhile an alien spacecraft has been discovered nearby and captured by NASA. One of the NASA scientists, Dr. Faraday, played by Howard Hesseman, has been tasked to study the spacecraft with his team and figure out where it came from. This turns out to be a colossal task as they can’t even figure out how it opens as the entire exterior appears seamless.

While the scientists continue to study the spacecraft, the hospital doctors continue to study David. Soon enough, brain scans of David display images of a strangely-shaped object and David begins to hear a voice in his head calling him. NASA soon discovers this and realizes that the strangely-shaped object is the spacecraft that they’re studying. Dr. Faraday heads to the hospital and tries to convince David and his parents of allowing his scientists to study David for two days. At first, they refuse, but after Dr. Faraday ensures them that they will be able to discover the truth about what happened to David, more so than the hospital can, they relent.

Dr. Faraday transports David to the NASA facility and shows him to his room. He’s provided with a bed, television, toys, and is also locked in so he can’t leave on his own accord. Food is delivered to him via a robot named RALF and a cheery aide named Carolyn, played by a young Sarah Jessica Parker. David and Carolyn hit it off well from the start and you can tell that David has a crush on her.

As the scientists scan David’s brain, images and words appear on their computer screens providing more information. They learn of a planet named Phaelon some 500+ lightyears away and apparently that’s where David has been for the past eight years. When David discovers that the scientists want to keep him for longer than two days, he decides to escape. He hears the voice in his head calling him towards the NASA hangar where the spacecraft is being held. David hides in the RALF robot and is taken towards the hangar without anyone finding out at first.

The spacecraft opens up for David and allows him to enter. He discovers that it’s piloted by a robotic commander whom he calls Max, voiced by Paul Reubens. It’s not long though before the NASA scientists are alerted of a breach in the hangar and rush to see what’s going on. To prevent being caught, David requests to Max that they fly away from there. 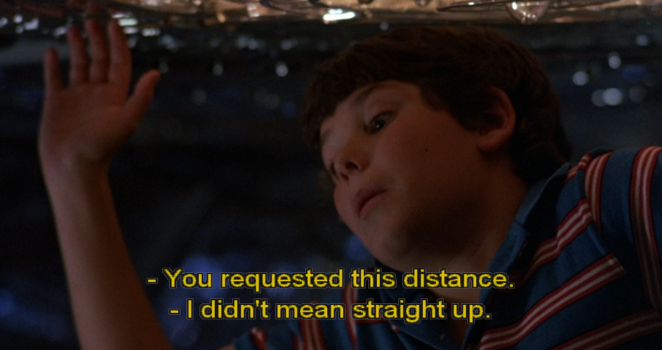 Once they’re far away from NASA, Max explains that he was sent to pick up living Earth specimens to be analyzed by the “Phaelon-ians” and David was chosen that night when he lost consciousness. Believing that humans only utilize 10% of their brains, the “Phaelon-ians” infused David’s brain with star charts to see what would happen. When the analysis is completed, Max travels back in time and returns the specimens to the exact moment when he picked them up so that they will believe no time has passed. However since the human body is too fragile, Max was afraid David wouldn’t survived had he travelled back in time and instead dropped David back to the present time, eight years later. And now Max needs the star charts found in David’s head to complete the rest of his mission and head home, hence while he refers to David as the Navigator.

While David agrees to allow Max to scan his brain for the star charts, the NASA scientists are busy tracking them to see where they’ve gone. Much of the rest of the film involves David and Max becoming friends as they travel together around the world from country to country. Max then promises to return David to his family, but upon arriving at David’s house, the NASA scientists are also there. David realizes that the NASA scientists will take hold of him once he disembarks and study him forever. Afraid of his life being reduced to a mere case subject, he convinces Max to travel back in time and return him to the night he picked him up originally. Max warns David that this might result in his death, but David is willing to take that chance.

Fortunately, the time travel works perfectly and David wakes up back in the woods on July 4, 1978. He rushes home to see his parents and brother just the way he remembers them and is grateful to be back with his family again! Of course, they have no idea what’s happened and just assume that David is extra loving this particular night. They spend the rest of the night watching fireworks with Max bidding farewell to David from above.

And that was Flight of the Navigator! Honestly, it’s a really great movie! It’s intriguing and captures your attention! While we’ve seen films involving alien spacecraft and time travel before, this film tells the story in a unique way that isn’t overly complicated and focuses a lot on the relationship between David and Max (even if it’s only the last half hour of the film). Joey Cramer gives a great performance as does Howard Hesseman and Sarah Jessica Parker. Even Paul Reubens isn’t bad.

A reboot of the film has been announced and I think it can be just as great as the original film. So until then, if you haven’t seen the original, I strongly suggest you check it out!