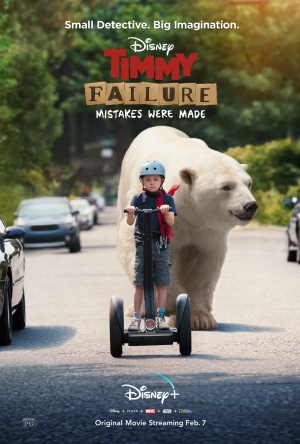 Let me start out by saying that while I’m a fan of Stephan Pastis’ work (Pearls Before Swine is probably my favorite comic strip ever), I’ve never read any of his Timmy Failure books. This isn’t surprising though as I wasn’t the target demographic of the books when they were published. So this Disney+ film is my introduction to the series, hence I can’t fairly judge whether or not this is a faithful adaptation. But, I can tell you whether or not I think the film is any good or just an utter…failure. 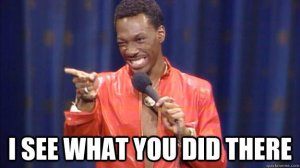 Read on to hear my thoughts!

Directed by Tom McCarthy, the film begins with narration from our protagonist, young Timmy Failure, played by Winslow Fegley. He’s just crashed a truck into somebody’s house and then we flashback to sometime in the past.

Timmy is an elementary school student living with his mother in Portland, Oregon. His father left them and since then, Timmy has started his own detective agency housed in his…house, an agency which he partners with an imaginary polar bear named Total.

Timmy’s demeanor is always the no-nonsense detective and his imagination is always in a hyperactive mode. Many scenes showcase how Timmy actually views the world via his immersive imagination.

Most of Timmy’s clients are his fellow classmates, not so much that they seek out his services, but more so that he offers his services without being asked.

His teacher is Mr. Crocus, played by Wallace Shawn, who honestly can’t stand having Timmy as a student. Lost all day in his imagination and detective demeanor, Timmy often neglects assignments and performs poorly. Mr. Crocus has had 11 meetings with Timmy’s mother highlighting that one more infraction will result in Timmy being suspended.

Timmy’s mother, played by Ophelia Lovibond, tries to her best to talk to Timmy, but it’s hard to get through to him. Nevertheless she does her best balancing being a single mom and working to take care of Timmy.

One day, Timmy’s mother’s Segway gets stolen. Timmy often uses it without his mother’s knowledge to travel from place to place and now he’s lost it. While worrying about that, he also has to deal with his mother dating a “meter maid” named Crispin, played by Kyle Bornheimer.

Timmy ends up falling into more trouble as the days go by culminating in disobedience at a field trip to the local dam. Timmy is almost expelled, but is show mercy by the school counselor, Mr. Jenkins, played by Craig Robinson. Timmy’s mother is fired from her job resulting in the two of them having to move to a smaller apartment. She even shuts down Timmy’s detective agency refusing to tolerate it anymore.

Timmy now to get used to being “normal”, even going so far as to let his imaginary polar bear friend go. After a talk with Mr. Jenkins though, Timmy regains the drive he once had. He seeks Crispin’s help to go find his polar bear friend at the zoo. And of course, Timmy is the only one who can see him. Then, they leave and while Crispin is out of his truck, Timmy gets behind the wheel and accidentally crashes into the house at the beginning of the film. It turns out that the house belongs to the recently retired Mr. Crocus.

Timmy is taken to the hospital, but is pretty okay. He and his mom make up. Crispin later shows Timmy that he is in possession of the Segway as it was parked in an illegal parking zone. And Timmy is ready to be himself and take on the challenge of middle school next year.

And that was Timmy Failure: Mistakes Were Made! Honestly, it was funny and creative. Plotwise, nothing really happens besides the Segway being stolen. But, the film seems to be more about Timmy and how he escapes into his imagination to deal with scary challenges in life. The best scenes in the film were his imagination scenes.

Winslow Fegley gives a brilliant performance as Timmy, almost too good, because gosh, you get tired of that annoying, smug character pretty quickly! Ophelia Lovibond wasn’t bad either and does a surprisingly good American accent for an English actress. Wallace Shawn was wonderful as always, but most of the other actors were pretty mediocre.

All in all, the movie is a bit weird, but it ain’t no failure. 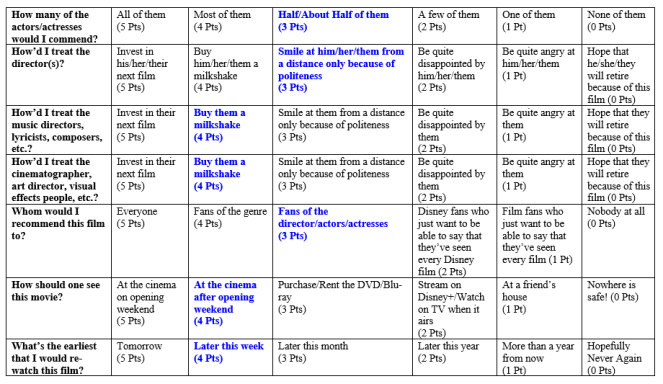