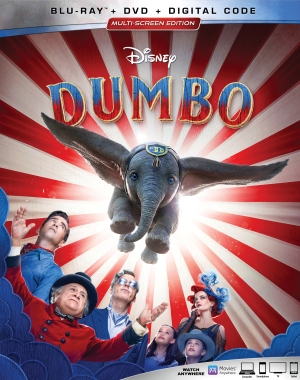 When the Disney live-action remakes were being announced like hotcakes, one of the worst ideas we heard was the planned remake of Dumbo! Surely a film about a flying elephant didn’t need to be remade as live-action! And to top it all off, exactly how good could the story be if it was written by the same person who wrote Transformers: Dark of the Moon and Transformers: Age of Extinction?

Audiences’ attitudes towards the film were apparent when the film grossed $353 million against a $170 million budget. Is the film really not that special? Or was I able to discover something that everyone else missed? Read on for my review of Tim Burton’s Dumbo!

The film takes place after WWI and begins with a montage of a traveling circus making stops in various American cities for their shows. The main locomotive carrying everyone is Casey Jr. which hadn’t we known it already, the background music would have informed us.

Like all circuses, there is a troupe of performers with different talents that they showcase in their acts. Two young kids in the troupe are Milly and Joe, played by Nico Parker and Finley Hobbins, respectively. Their characters aren’t all that impressive with Joe being a typical boy and Milly being one of the “interest-in-science-acts-as-a-personality” female characters that we see a lot of nowadays.

Their parents used to perform as equestrians in the circus until their mother passed away due to the Spanish Flu and their father was drafted in the armed forces. Thankfully, now that the war is over, he has just returned back to the circus and to his kids albeit with an arm missing. Holt Farrier, played by Colin Farrell, is both happy to see his kids again, but also nervous that he won’t do a good job in parenting now that their mother has died.

He’s itching to get back into the circus act though, but soon realizes that due to financial problems, all the horses have been sold by the circus ringmaster, Max Medici, played by Danny DeVito.

Holt is then put in charge of the pregnant elephant, Mrs. Jumbo. It isn’t long before she gives birth to a baby elephant with larger-than-normal flappable ears. Mr. Medici sees this as a problem and that audiences wouldn’t want to see a baby elephant with giant ears. He tells Holt that it’s his responsibility to solve this problem.

They try keeping the baby elephant’s ears hidden during a big top performance, but they’re soon uncovered much to the audience’s amusement. The jeers from the audience cause Mrs. Jumbo to protect her baby as well as the other elephants to lose control. The audience flees as the elephants are attempted to be tamed, but an abusive handler gets killed in the process.

This results in Mrs. Jumbo being deemed a “mad elephant” and kept locked in a train car by herself away from her baby, now known as Dumbo. And as you’d expect, the song Baby Mine is sung here, although it’s sung by one of the troupe members around a campfire rather than in the background to have us focus only on Mrs. Jumbo and Dumbo.

Mr. Medici sells Mrs. Jumbo after this incident much to Dumbo’s sadness. Milly and Joe try to take care of and cheer up Dumbo. While doing so, they discover that due to the size of his ears (and with the help of a feather to induce sneezing), Dumbo can actually fly!

They get him to showcase this feat in their next show mesmerizing the entire audience as well as Holt and Mr. Medici!

Nope, you would think the movie would end there but nope, we need a new subplot!

Enter amusement park entrepreneur, Mr. V. A. Vandevere, played by Michael Keaton. He has read the newspapers’ reports about Mr. Medici’s flying elephant and wants to see him for himself. He’s amazed when he comes face to face with Dumbo and even wonders from Milly and Joe how they trained him to fly.

Mr. Vandevere convinces Mr. Medici to partner with him and perform at his theme park, Dreamland. Mr. Medici hesitantly agrees as long as Mr. Vandevere promises that the entire troupe will remain together and be taken care of.

It’s not long before they all see the wonder that is Dreamland, a sort of mix between Tomorrowland and Coney Island.

There they meet Mr. Vandevere’s trapeze artist, Colette Marchant, played by Eva Green. Mr. Vandevere wants Holt and the kids to train Colette to be able to ride Dumbo as he flies around during his upcoming first show at Dreamland.

It takes some time, but eventually Colette is able to ride atop Dumbo. They showcase this at the next show wherein Mr. Vandevere has invited an investor, Mr. Remington, played by Alan Arkin, to view the performance. He’s hoping that Mr. Remington will finance his further plans for Dreamland. But before we get to that, it’s time for the main reason why Tim Burton had to direct this film: a Pink Elephants on Parade tribute!

After that’s over, Dumbo’s flight doesn’t go well as Mr. Vandevere has ordered the removal of safety nets during the performance, an act scaring and angering everyone from Colette to Holt to Mr. Medici. Dumbo manages to fly though when he hears the sound of what seems to be his mother in another area of the amusement park. He flies out of the show to go find her. Mr. Remington doesn’t see this as proof of anything for some reason and refuses to finance Mr. Vandevere.

But Mr. Vandevere, having lost his financier and having his performance ruined, doesn’t care about any of this. He fires Mr. Medici as well as his entire troupe and makes plans to get rid of Mrs. Jumbo once and for all. Holt, Colette, and the kids soon discover this plan and work together with the rest of the Medici troupe to rescue both Mrs. Jumbo and Dumbo from Mr. Vandevere’s greedy grasp. He tries to stop them, but ends up causing a fire to his amusement park resulting in all his parkgoers fleeing the scene.

The film ends with the implication that Mr. Vandevere has been arrested for his actions while Mr. Medici has gone back to having his own traveling circus except with wild animals in captivity this time. And Dumbo and Mrs. Jumbo have been sent back to India to live amongst their own kind.

And that was Dumbo! So was the film really not that special? Yes, yes it wasn’t. While the cinematography, art direction, and production design are really colorful and great to look at, the overall film lacks any sense of heart or charm. The mere fact that one of the saddest songs in Disney history, Baby Mine, can’t cause a tear to be shed due to the relationship of Mrs. Jumbo and Dumbo not being the sole focus of the song is saying something!

Another problem with the film is that it seems like two films in one! The 1941 Dumbo is only 64 minutes long. So making this film 112 minutes long is just as effective as dividing The Hobbit into three films! Had the film not had the Mr. Vandevere subplot and left Dumbo’s flying for the climax of the film resulting in him reuniting with this mother, it would have been much more effective.

I guess acting-wise, the film wasn’t too bad. Danny DeVito surprisingly gives the best performance of the film as well as surprisingly being the human character with the most screen time. Michael Keaton is merely okay in his performance as an unscrupulous tycoon. Colin Farrell and Eva Green are exactly how you’d expect them to be.

The kids’ performances was either forgettable (like Finley Hobbins) or annoyingly one-note (like Nico Parker). While the protagonist of The Nutcracker and the Four Realms was science-minded, she also had a personality and we felt like we knew her story and emotions throughout the film. In this film, Milly seems to lack any knowledge of how to emote other than worshipping the scientific method! It just comes off as annoying rather than inspiring or impactful.

It’s no secret that I’m not a fan of the live-action Disney remakes and this one doesn’t change my opinion of them at all.