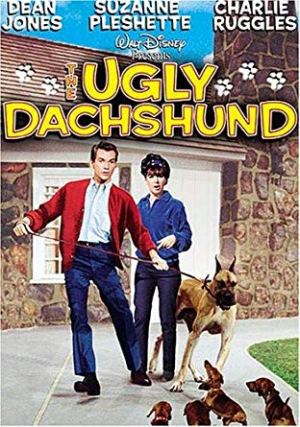 Another dog movie? Hopefully I’ll actually like this one! Without further ado, here is my review of Disney’s The Ugly Dachshund!

After the opening credits roll, we are introduced to a somewhat flustered Mark Garrison, played by Dean Jones. His wife, Fran, played by Suzanne Pleshette, has told him that it is time. Mark calls the doctor and then drives his wife to the hospital quite speedily.

Along the way, a cop tries to pull over the Garrisons for speeding, but once realizing that this is a pregnancy case, the officer pulls up in front and provides an escort to the hospital. However when he arrives at the hospital, he realizes that the Garrisons are not behind him!

Annoyed at being deceived, the officer heads back on the road and soon find the couple parked next to a veterinarian’s office. It then becomes clear to everyone that Fran’s pet dachshund was pregnant and they were rushing to get the dog to the vet, Dr. Pruitt, played by Charles Ruggles, as quickly as they could. The officer finds this turn of events hilarious and jovially gives a number of tickets to Mark who doesn’t find it quite as hilarious anymore.

The Garrisons leave the dachshund with Dr. Pruitt as they await the arrival of the dachshund’s three puppies. When Mark goes back the next day to retrieve the dogs, he also sees a Great Dane pup who has been pushed away by its mother due to a large litter. Mark takes a liking to the pup and convinces Dr. Pruitt to let him have it.

When Mark returns home with the litter, Fran is suspicious at the fourth “different”-looking pup, but decides it must be because the pup was born after the others. Mark doesn’t explain it any other way afterwards. It’s not long though before the puppies get bigger and are able to be distinguished including Brutus, the Great Dane.

Fran gets upset with Mark for not telling her about the Great Dane, but soon sympathizes when she hears the story of how Brutus was neglected by his mother. Still, Fran says Mark has to return Brutus to Dr. Pruitt which he sadly does.

Soon after, Mark’s birthday arrives and Fran surprises him by gifting him Brutus. Brutus, now a HUGE dog, still considers the other dachshunds to be his siblings.

Much of the film revolves around the mischievous dachshund puppies causing a mess without the Garrisons knowing and then Brutus taking the blame for it while trying to stop the ruckus and being caught by the Garrisons afterwards. The dachshunds ruin the living room, Mark’s art shed, and even a garden party hosted by the Garrisons. Yet, it’s poor Brutus whom Fran blames for the damages due to the circumstantial evidence.

Fran soon learns the truth though when Brutus saves one of the dachshund puppies one day by barking non-stop when the dachshund falls into the garbage can. She learns to like Brutus again and Mark realizes that maybe Brutus tries to be a dachshund because he doesn’t know he’s a Great Dane.

Mark gets an idea to train Brutus and enter him in a dog show. Sadly the training doesn’t seem to go too well even with Doctor Pruitt’s help as Brutus still thinks he’s part dachshund. But when he sees a female Great Dane at the dog show, he gets the confidence to show off and behave like a true Great Dane winning him the blue ribbon! He’s learned who he is and he, the dachshunds, Mark, and Fran are all one big happy family again!

And that was The Ugly Dachshund! It’s honestly an overall enjoyable film, albeit with little to no plot. Most of the film, like I mentioned focuses on the destruction that the dachshund puppies cause and Brutus getting blamed for it. The chaos scenes are quite impressively choreographed though!

The ending scene with the dog show seemed out of place and just an extra addition that wasn’t necessary. Had the film ended at the climactic scene when Brutus saved the dachshund in the garbage can, it would have made more sense. However, the film is still a lighthearted, fun film to watch with tolerable acting from all involved. There are even cameo appearances by Parley Baer and Charles Lane! I’d say give it a shot if you haven’t already! 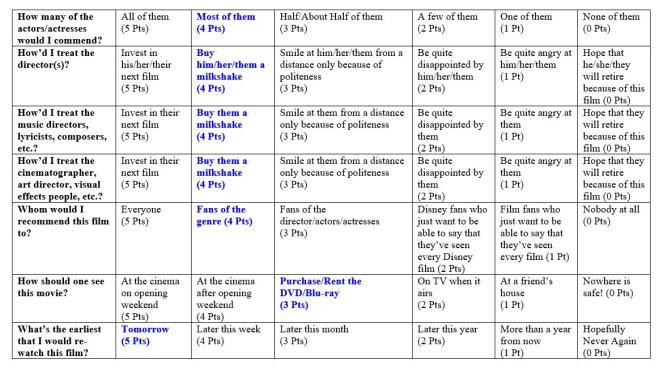