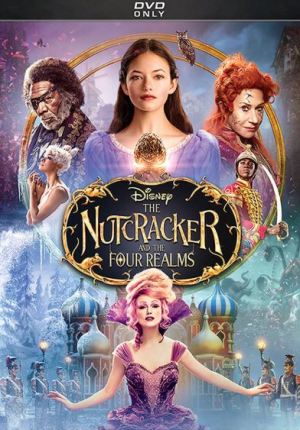 I have to admit that the Nutcracker story is one that I’m unfamiliar with. I’ve never read the short story, seen the ballet, or seen any other film adaptation of it. So this Disney film directed by Lasse Hallström (and Joe Johnston for a month of reshoots) is my introduction to the story. Is it a tale worth telling? Read on to find out!

The film begins with a bird’s-eye view of Victorian London on Christmas Eve.

Not long after we’re introduced to young Clara Stahlbaum, played by the beautiful Mackenzie Foy. She’s your typical protagonist that are found common nowadays: possessing both good looks as well as a mind for science, physics especially. She’s recently suffered a tragedy though; her mother passed away. Her death affected Clara, her siblings, as well as her father, played by Matthew Macfadyen.

That night, her father gives Clara her Christmas gift that her mother got her before she passed. It’s a sort of mechanical egg that needs a particular key to open it. Before Clara can figure out what to do with it, her father insists that they all attend the local ball even though Clara doesn’t feel much like going.

The ball is held at an opulent manor owned by the children’s godfather and local inventor, Drosselmeyer, played by Morgan Freeman. Clara shows him the egg from her mother and he recognizes it as one that he made and gave to her mother years ago. You see, Clara’s mother was an orphan and Drosselmeyer raised her.

The only help that Drosselmeyer gives to help Clara open the egg is her Christmas gift. He has this tradition of giving all the kids at the ball gifts which they can find by following long strings with their name on them. As Clara follows the string with her name on it, she’s led upstairs through a room and into what one can describe as a winter wonderland.

As she enjoys this new world that she’s found, she finds a key at the end of the string and realizes that it’s the one that will open the egg. Before she can retrieve it though, it’s stolen by a mouse. Clara runs after the mouse and is about to cross a bridge in pursuit of it when she’s stopped by a living, breathing Nutcracker soldier, Captain Philip Hoffman, played by Jayden Fowora-Knight.

He forbids Clara from crossing the bridge as it leads to the Fourth Realm which is forbidden to enter as it’s at war with the other three Realms. Clara is still a bit confused as to what’s going on and is even more confused when Captain Hoffman refers to her as “Princess” after learning her name. Clara decides to use this to her advantage and orders Captain Hoffman to escort her into the Fourth Realm in pursuit of the key.

As they enter the dark forest of this Fourth Realm, it’s not long before Clara gets kidnapped by a giant Mouse King made up of many smaller mice.

Captain Hoffman rescues her and the both of them are then scared off by a giant mechanical robot lady calling Clara telling her that she has her key. Captain Hoffman and Clara exit the Fourth Realm and head to the palace.

They explain to Clara how her mother was once the queen of this fantastic world and that’s why they refer to Clara as the Princess. They’re sad though when Clara tells them that her mother has passed away. Sugar Plum takes the time though to become friendly with Clara, showing her around, and even offering to do her makeup and get her ready for a royal performance later as Clara isn’t too good at that sort of thing.

After Clara is ready, Sugar Plum takes her to the royal performance.

The performance is a ballet performed by Misty Copeland along with other dancers which depicts the history of their world. In it, Clara learns how her mother discovered this world when she was younger, how she became Queen of the Four Realms, and how Mother Ginger, the regent of the Fourth Realm, waged war on the other three realms.

All the regents, soldiers, and overall population of this magical world used to be mere toys until “brought to life” by an invention of Clara’s mother. After the performance, Sugar Plum shows Clara the invention known as the Engine. It looks like a gigantic ray gun microscope, but is no longer operable as the key is missing.

Sugar Plum wishes they had the key so that they could use it to defend the realms from Mother Ginger’s attacks. Clara notices that the key needed to power the Engine is the same key that would open her mechanical egg, so she pledges to go back into the Fourth Realm (with more soldiers this time) to try to retrieve the key.

As she leads the soldiers into the Fourth Realm, she soon enters the giant mechanical robot and finds Mother Ginger within. Clara steals the key from Mother Ginger, played by Helen Mirren, and escapes. Mother Ginger tries to get Clara to come back and warns her that the key is dangerous, but to no avail.  Once she’s out of the Fourth Realm, she opens the mechanical egg and finds just a regular music box inside. She’s disappointed as she expected to find some sort of secret that would give her the power she needs to deal with her mother’s death.

Nevertheless, she carries on with her task and returns the key to Sugar Plum. Sugar Plum is pleased and starts bringing toy soldiers to life. It’s here where the truth is revealed: Sugar Plum is planning to attack Mother Ginger with these soldiers, not defend the Realms! She had tried taking over the Realms before, but was stopped by Mother Ginger, whom she later banished to the Fourth Realm and spread lies about. So, Sugar Plum was the bad girl all along!

Sugar Plum imprisons Clara along with Captain Hoffman and the other regents. While feeling hopeless, Clara discovers that her music box has a hidden mirror inside it. Now she realizes the gift that her mother wanted to give her: the fact that Clara herself is enough to deal with her troubles.

Getting a boost of confidence, Clara and Captain Hoffman manage to escape. Captain Hoffman heads to the Fourth Realm to warn Mother Ginger about the incoming armies while Clara tries to sneak into the Engine room and alter the machine. After hearing from Captain Hoffman, Mother Ginger decides to attack Sugar Plum’s soldiers at the palace to keep her busy while Clara can do her job. Fortunately, Clara is able to modify the Engine to revert the live beings back into inanimate toys and aims it right at Sugar Plum.

Peace is restored to the realms and Mother Ginger’s false bad reputation is expunged. Captain Hoffman gets promoted to Captain of the Guard. Clara bids everyone farewell and heads back to Drosselmeyer’s manor. Once there, time hasn’t moved all that much, and she thanks Drosselmeyer for her “gift”. Drosselmeyer puts a smile on Clara’s face by telling her that her mother said that Clara was her greatest creation!

Clara reunites with her father and apologizes for not realizing the deep pain that he’s going through having lost the love of this life. And her father apologizes to her about how he keeps putting societal burdens on her rather than letting her grieve. The film ends with a sweet father-daughter dance between the two of them.

And that was The Nutcracker and the Four Realms! And honestly, this was such a surprising delight! I do find the story interesting enough, but I can’t say how accurate it is to the source material as I’m unfamiliar with it like I said. My favorite thing about this movie though is how GORGEOUS it looks! I swear, I haven’t seen such a beautifully-looking Disney film (or non-Disney film, for that matter) in a long time! How this film didn’t get Academy Award nominations for production design, costume design, and visual effects, I’ll never understand! 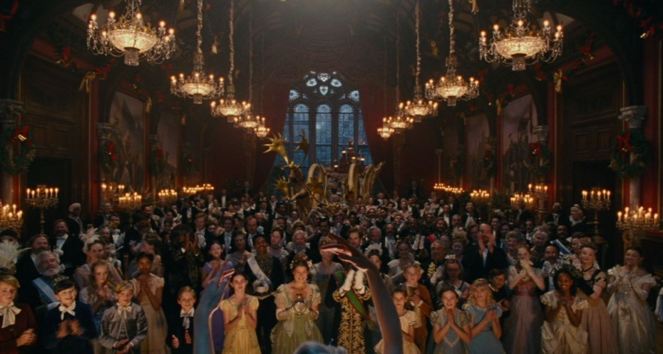 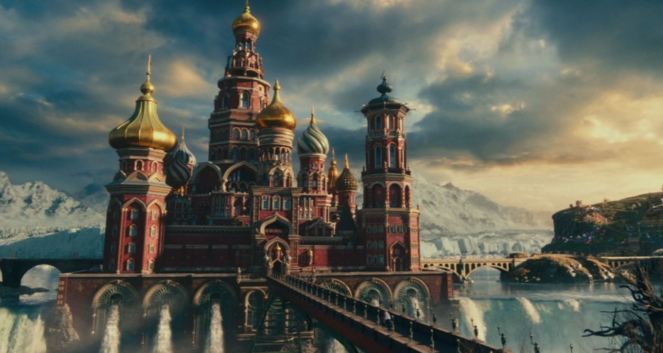 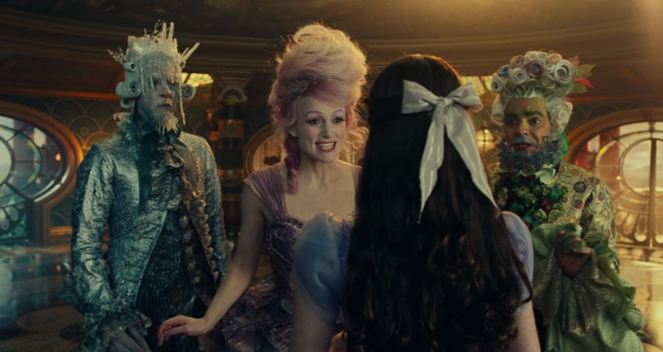 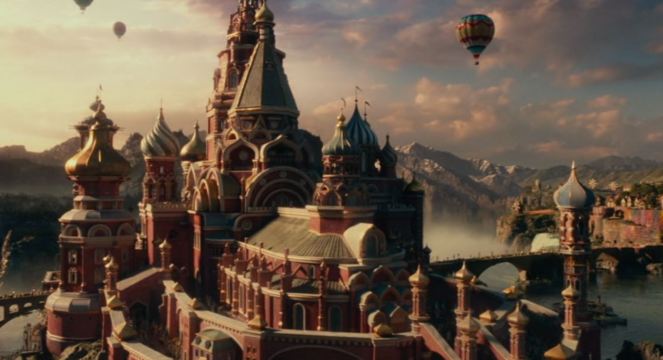 I do have a few criticisms of the film, but none of them are extremely dire. Firstly, the film does leave many questions unanswered: Were the Four Realms a world created by Drosselmeyer, in the beginning? Do the citizens of the Four Realms know about Drosselmeyer since he apparently had to go into that world to leave the key for Clara? Was he aware of the long war between the realms? How did Clara’s mother discover this world? What made her leave it? Were Clara and her siblings born in the realms? Was Clara’s father from the realms? Does he know about the realms? So many unanswered questions, but honestly the film was delightful enough that I don’t care too much about the answers.

Another criticism I have is that the film is a bit too short. It’s a mere 99 minutes long and I feel an extra 15 minutes at least would help answer some of the aforementioned questions. It’s also inevitable to notice similarities between this film and other films such as the Narnia series, The Wizard of Oz, A Christmas Carol, Fantasia, Alice in Wonderland, etc. Due to the genre of the film, it makes sense that similarities will be found as films of this genre do share similarities and many of these similarities were intentionally placed in the film.

The film also has the typical forcedness of physics and engineering by Clara that many female protagonists have these days. Nothing against physics and engineering, but it just seems forced in this film rather than showing up naturally. Also while Keira Knightley and Mackenzie Foy gave great performances, I feel Helen Mirren, Richard E. Grant, Eugenio Derbez, and even Morgan Freeman, to an extent, were underused. And Jayden Fowora-Knight could have been better, but seeing that it’s his first film, it’s a bit understandable.

Summing up, I’m really sad that this movie didn’t fare well at the box office! This is a hidden gem of a movie that I’m glad to have seen!