There’s not much to say in terms of an introduction other than this was the first time I saw this film. I had known about its existence for years though. Am I glad I finally saw it? Well, here’s my review of The Misadventures of Merlin Jones!

The film begins with a stop-motion animated song segment wherein the credits roll. While the animation is impressive (as most stop-motion animation tends to be), the Sherman Brothers’ theme song for Merlin Jones (sung by Annette Funicello) isn’t really one of their best works, in my opinion.

Its purpose though is to give us an introduction to our main college student characters, the titular inventor, Merlin Jones, played by Tommy Kirk, and the girl who loves him, Jennifer, played by Annette Funicello.

After the song ends, we get a look at Merlin Jones’ latest invention: a helmet of sorts that measures brainwave activity. Merlin decides to wear it while driving as an experiment to see what brainwave activity may be recorded, but he’s pulled over by a cop who thinks the helmet is too much of a distraction to be worn by driving.

Because of this, Merlin Jones is sent up before the honorable Judge Holmsby, played by Leon Ames. Judge Holmsby also doesn’t agree with Merlin’s reasons for wearing it while driving and decides to suspend his driver’s license for a short time.

Later that day at the college laboratory, an electrical accident somehow gives Merlin the ability to hear people’s innermost thoughts. It proves useful to him when at his job working in a cafe, he hears the inner thoughts of Judge Holmsby himself upon whom he is waiting. From the sound of it, Merlin gets the idea that the Judge is secretly a criminal who has stolen a bunch of diamonds recently!

Scared as well as excited about this information, Merlin decides to tell the police. But, of course, they don’t believe him as he doesn’t have any real proof and he hasn’t told them about his ability to hear people’s thoughts. The police think Merlin’s just upset at the Judge for suspending his license and wants to get back at him in some manner.

Merlin then takes matters into his own hands and goes with Jennifer (to whom he has confided his mind-reading ability) to the Judge’s house posing as plumbers. The Judge isn’t home at the time, but his housekeeper lets them in. Merlin and Jennifer use this time to find any sort of evidence implicating the Judge.

The only “evidence” they find is his collection of crime novels written by the famous crime writer, Lex Fortas. Merlin is convinced that the Judge uses these novels as inspiration for his crimes. The next night, Merlin and Jennifer go digging in the Judge’s backyard assuming that he’s buried the stolen diamonds there. The police are soon called to the scene by the housekeeper and Merlin and Jennifer accuse the Judge. The Judge then takes everyone inside his house and divulges his secret.

As you’ve probably guessed, it was all a misunderstanding! The Judge is no criminal, rather he is Lex Fortas himself! He writes crime novels in his spare time and what Merlin overheard at the cafe that day was the Judge pondering the plot of a new manuscript he was working on. Everyone laughs this off and promises to keep the Judge’s identity as Lex Fortas a secret at his request. The Judge even gives Merlin his driver’s license back not long after. 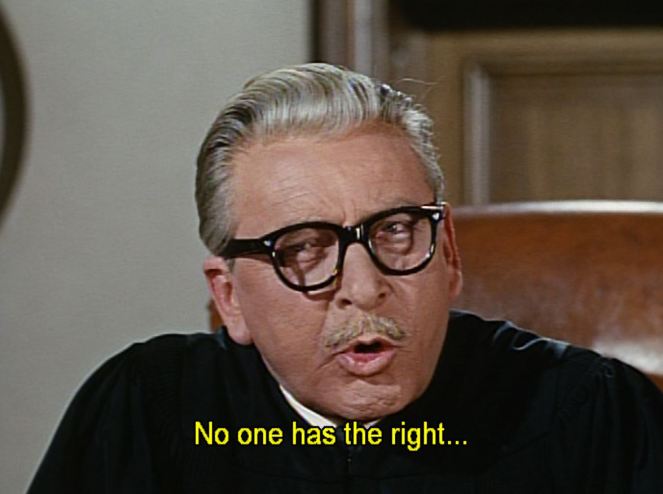 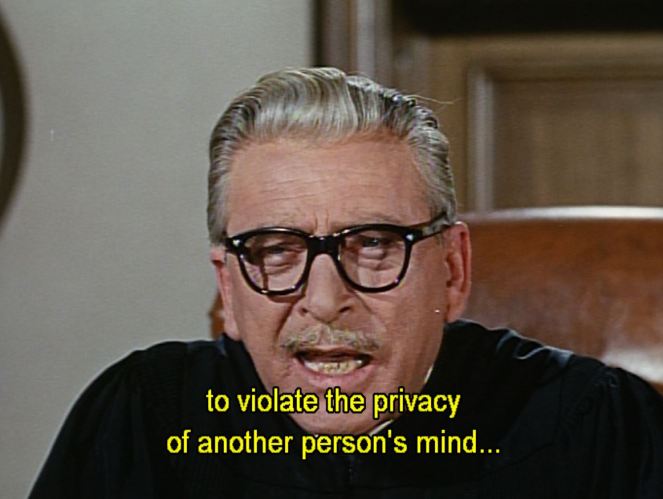 Wait, it’s not the end yet! The title says “Misadventures”, plural! Hence, we need at least one more misadventure to complete this film. As you can probably guess, Merlin soon loses his ability to read minds, but gains a new “superpower” of sorts: the power of hypnosis!

He learns the “science” of how to perform it from a professor at his college (I really wonder what class this was taught in) and soon gets the idea to try it out on the college’s pet chimpanzee. Merlin visits the chimpanzee in the laboratory and hypnotizes it to stand up against the cruel treatment it’s received from the abusive Norman, played by Norm Grabowski. This leads to the chimpanzee full on attacking Norman and knocking him unconscious with a bottle.

After regaining consciousness, Norman takes Merlin to court assuming it was him who knocked him unconscious. The case is presided over again by Judge Holmsby and Merlin tries to explain that he’s innocent and that he merely hypnotized the chimpanzee.

Judge Holmsby absolves Merlin from any wrongdoing, but secretly asks him to drop by his house later that night.

Later that night at the Judge’s home, Judge Holmsby tells Merlin that he’s interested in using hypnosis as plot device in a crime novel he’s working on and wants Merlin to teach him all he knows on the subject. Merlin does his best, but they come to a disagreement when Merlin says how most “experts” agree that someone cannot be hypnotized into doing something that’s against their own personal moral code. So, an honest man who would never steal can never be hypnotized into committing a theft.

Judge Holmsby wants to test this theory and convinces Merlin to hypnotize him to commit some small crime. Merlin is hesitant at first, but eventually hypnotizes the Judge. He convinces the Judge to sneak into the college laboratory that night, steal the chimpanzee, and forget about it in the morning.

Much to Merlin’s surprise, the Judge does exactly this! Merlin tries to stop him midway, but is unsuccessful. After the Judge brings the chimpanzee back to his house and goes to sleep, Merlin sneaks into the house, picks up the chimpanzee, and returns it to the laboratory. However the police are there inspecting the crime scene and when they see Merlin with the chimpanzee, they assume Merlin was the one who stole it.

And as you can imagine, Merlin is back in court in front of Judge Holmsby. This time he can’t say what really happened because the Judge wouldn’t remember stealing the chimpanzee. However, his brave girlfriend, Jennifer, tells the Judge what really happened (as she was with Merlin when this all was going on)! Luckily, the Judge believes her, but is confused. How was he able to be hypnotized into committing the act of theft, an act he would never do on his own? Were the experts wrong in their theory or…

And that was The Misadventures of Merlin Jones! Honestly, it feels like two or more different films put together. I know that that was the point of the film, but somehow it doesn’t work. I was much more interested in and invested in the first half of the film rather than the second half. I feel they should have done what they did with the “Dexter Riley” trilogy and make multiple films, but each having only one storyline! So the first one would feature mind-reading, the second would feature hypnosis, etc. Or maybe it would have worked better as a TV show. The rumors are that it was intended to be a TV show, but became a film instead.

I loved Leon Ames’  performance and found Tommy Kirk okay. Annette Funicello was just herself as usual. I’m really surprised that this film was such a huge hit when it came out! All I can say is, maybe watch the first half of the film and you’ll enjoy it fine. But altogether, I can’t give the film a high enough grade.