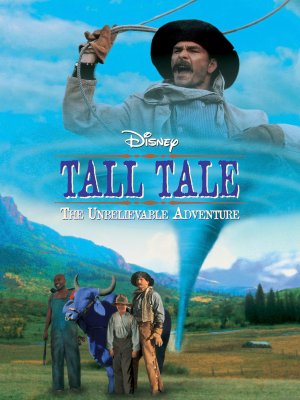 The folklore character, Pecos Bill, appeared in the 1948 animated Disney film, Melody Time. But, he would later re-appear in the 1995 live-action Disney film, Tall Tale. Today we take a look at this film and decide if this is a story worth remembering or not. Enjoy!

The film takes place in a small Western U.S. town named Paradise Valley in the year 1905. Our main character is young Daniel Hackett, played by Nick Stahl. He lives on a farm with his parents and like all farmers, he spends his time plowing the land and working the field. However Daniel hates farm life and would rather sell the farm and move to a big city, a dream which angers his father, Jonas, played by Stephen Lang.

Jonas is a proud farmer and believes in the sanctity of a person’s land. To make amends with his son over their differing views, he takes Daniel out to fish with him in a nearby lake. It’s during these father-son bonding times that he tells Daniel folk tales of American legends such as Pecos Bill, Paul Bunyan, and John Henry. Daniel, of course, doesn’t believe in the existence of these characters, but accepts the morals of the stories such as respecting the land, defending the defenseless, and never spitting in front of women or children.

Later that night, there is a town hall meeting wherein a rich developer known as J. P. Stiles, played by Scott Glenn, is trying to convince all the farmers to sell their land to him at $50 an acre! This price astounds many of the farmers, but Jonas speaks out saying how he’s not selling his land for any amount of money.

The other farmers join Jonas’ way of thinking much to Mr. Stiles’ chagrin. After the meeting, Mr. Stiles and some of his henchmen attack and injure Jonas hoping to steal the deed of his land from him. However, Jonas had given the deed to Daniel prior to this for safekeeping. The day after, a doctor tries to do what he can to save Jonas, but says it’s all in the Lord’s hands now. Daniel runs out of the house crying and heads to their boat tied nearby to the dock.

Unbeknownst to him, as he’s crying, the rope unties and the boat drifts away from the dock and somehow ends up in a barren desert.

Confused as to how he got there, Daniel is then held up by two ne’er do wells who steal his money and deed and are about to shoot him when help arrives via a nearby tornado.

Out from the tornado rides a figure atop a horse which turns out to be none other than Pecos Bill himself, played by Patrick Swayze. Pecos Bill rescues Daniel from the bad uns, retrieves Daniel’s money and deed, and informs the boy that he’s in Texas. Daniel doesn’t believe that this is Pecos Bill, of course, but seeks his help in getting back home to Paradise Valley. 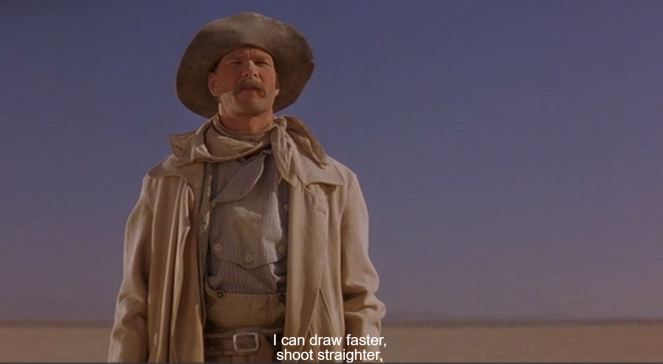 This begins a journey wherein Daniel bonds with Pecos Bill and learns more about Pecos Bill and his own self. They first go to a nearby logging area searching for Paul Bunyan who apparently left town when machinery took over the logging industry.

Despite getting attacked by some of the workers there (because Mr. Stiles has put out a notice for Daniel’s arrest), Pecos Bill and Daniel escape and find Paul Bunyan, played by Oliver Platt, in a nearby redwood forest. Paul Bunyan has pretty much given up on life and lives in the forest away from anyone while feeling sorry for himself. But, a good talking-to by Daniel convinces Paul Bunyan to join their posse along with his blue ox, Babe.

They then come across a third American legend, John Henry, played by Roger Aaron Brown. He’s taking part in a competition against a machine to hammer in a steel head into the ground. Daniel is chosen to help John Henry in this task, but sadly they lose against the machine. Daniel learns the value of giving everything your best shot though and John Henry joins the posse as well.

It’s not long before Mr. Stiles’ men catch up with the group in the desert though.

And Daniel, tired of running, gives the deed to Mr. Stiles. This causes all the sand everywhere to swirl around amidst a barrier of confusion resulting in Daniel waking up in the boat tied to the dock near his house. So, it appears that all of this was a dream.

Daniel heads into the house to see his father who has just awoken from his unconsciousness and tells him how he met Pecos Bill and the others. Jonas kinda sorta believes Daniel, but is overall glad to know that Daniel has come to value the farm and won’t give the deed up to Mr. Stiles.

The climax ends when Daniel heads into town to stand up to Mr. Stiles with Pecos Bill, Paul Bunyan, and John Henry appearing to help. So…maybe it wasn’t a dream and the trio are a bunch of desert spirits or something? I dunno.

Anyway, Daniel’s courage causes the other farmers to rally together with him to refuse Mr. Stiles’ offers and drive him out of their town!

Soon Jonas gets better and is back to working the farm with Daniel. Daniel sees the three American legends one last time as they’ve come to say goodbye. Pecos Bill gives Daniel his own personal horse to keep and even Jonas is able to see the trio.

And that was Tall Tale! Honestly, this film was a pleasant surprise and definitely a story worth remembering. It’s your typical coming-of-age story, but the Wild West setting with the original “American Avengers” makes it unique. Patrick Swayze gave a great performance as Pecos Bill and even Nick Stahl gave his best shot in his performance. I was honestly disappointed with Paul Bunyan though, both the way his character was portrayed and Oliver Platt’s portrayal of him. The grandiose-ness of the character seemed lost in this version! But I guess it’s because they wanted Pecos Bill to stand out as the main hero.

The film also had a few cameo appearances by William H. Macy, Jared Harris, Burgess Meredith, and even Catherine O’Hara as Calamity Jane in a brief scene. I would love to see a sequel to this film with more American folktale characters as there are so many more to choose from! But until then, at least we have this film to tide us over! 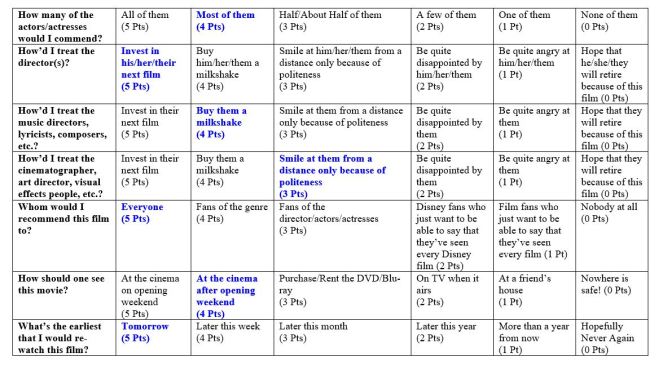