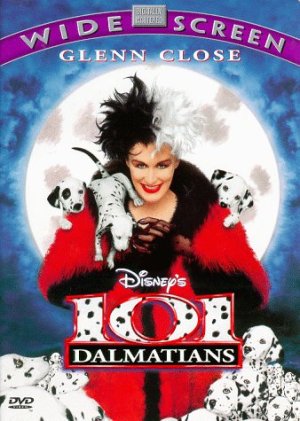 As mentioned before, Disney has done live-action remakes of their animated films before this current era of live-action Disney remakes dawned upon us. One was The Jungle Book in 1994, but the more famous and successful one was 101 Dalmatians in 1996.

Directed by Stephen Herek, the film was a financial success, even spawning a theatrical sequel. Now, why did this film not bother Disney fans as much as the current remakes do? I think it has to do that with the fact that it was released at a time when this was a rarity as well as it didn’t seem to promote the idea that the animated film was inferior in any way.

I had never seen the film before, but one of my readers, kirksroom, suggested that I review this film. So let’s find out together what I thought of 101 Dalmatians!

As the movie opens we’re introduced to the character of Pongo, a dalmatian, owned by video game designer, Roger, played by Jeff Daniels. Pongo serves not just as Roger’s pet, but his faithful companion making sure he gets up on time and does what he needs to do.

Roger’s career is in a bit of strife at the moment as he has a hard time selling his video games. His most recent project was rejected for not having an interestingly enough villain.

Meanwhile, we’re also introduced to the character of Anita, played by Joely Richardson. She works as a fashion designer for Ms. Cruella de Vil, played maniacally by Glenn Close. Cruella is much like her character in the 1961 animated film in that she’s a fashionista obsessed with furs, extremely classy, and will do anything to get what she wants.

Both the human and dog weddings take place and are attended by their respective “family and friends”.

And it’s not long after that both Anita and Perdita are pregnant. Anita’s old nanny, played by Joan Plowright, comes to live with the family to help them take care of things especially with all these pregnancies going on! It’s not long before Perdita gives birth to 15 puppies, almost 14, but like the 1961 animated film, Roger helps one of the puppies on the verge of death to breathe again, thereby making it 15.

Everyone is excited until Cruella catches wind of the puppies being born. She comes over to the house and tries to buy the puppies from Anita for an exorbitant price, but Roger puts his foot down saying how the puppies are not for sale. Not used to being denied what she wants, Cruella plans to find another way to purloin the puppies.

She gets two of her hired hands, Jasper and Horace, played by Hugh Laurie and Mark Williams, respectively, to break in the house one day and kidnap the puppies. They take the puppies to the De Vil Mansion where they await the guy who’s supposed to kill them along with 84 other stolen dalmatian puppies.

When Roger, Anita, Pongo, and Perdita come home and discover the puppies missing, they’re of course, distraught. Roger and Anita inform the police whilst Pongo uses the twilight bark, a sort of “barking telegraph” to send the news to all the dogs in the city that the puppies have been stolen.

When “word” gets back to them that the puppies are in the De Vil Mansion, Pongo and Perdita run away from their owners to try to find the puppies themselves.

Meanwhile other dogs and animals that are nearby the De Vil Mansion break in and constantly outsmart Jasper and Horace as they try to rescue the 101 dalmatians.  Cruella is apoplectic when she arrives at the Mansion to discover all the dalmatians have escaped! She goes off searching for the puppies herself whilst Jasper and Horace go off looking for the puppies on their own.

Jasper and Horace give up when the abuse from the animals gets too much and turn themselves in when a police van arrives nearby. Cruella has followed the puppies to a farm where Pongo and Perdita have joined them as well, but is outwitted by the farm animals who cause her to fall into a tub of molasses and thrown out of a window. The police arrest her there and then.

All the dalmatians are later reunited with Roger and Anita who now have to find a big enough place to hold all 101 dalmatians. Fortunately, Roger amends his video game by introducing Cruella De Vil as the villain and the game is successful. They’re able to move to a big place in the countryside (a dalmatian plantation, if you will) where they all live happily ever after together! Oh, and Roger and Anita’s baby has finally been born!

And that was 101 Dalmatians and it was…eh…let’s talk about the good stuff first. First of all, the acting is for the most part, great. Glenn Close is magnificent as Cruella De Vil, totally eating up every aspect of the character! Hugh Laurie is also wonderfully superb as the brainier of the henchmen duo, Jasper. Joan Plowright is a quintessential Nanny and Joely Richardson is good as Anita, capturing the sweetness and devotion of the character. The only performances I felt were not that great were those of Mark Williams and Jeff Daniels. Mark Williams played the character of Horace more differently than the 1961 film and for what it’s worth, I could never see the character of Roger; I could only see Jeff Daniels!

The cinematography and visuals don’t particularly stand out, but I don’t remember being frustrated by any of them either. I understand the changes in plot such as making Roger a video game designer to fit with the times and all that, but I did miss certain other plot points such as a climactic crazy car chase scene with Cruella De Vil at the end of the movie. I felt her “defeat” was a bit anticlimactic.

Now for my main gripe of the film: the animals don’t talk! A majority of the film (as was in the 1961 animated film) focused on the rescue of the dalmatians and the animals involved in that process. And since none of the animals talk, you’re honestly filled with a good 40 or so minutes of just watching animals do stuff quietly which to me is quite boring. Yes, the animals outsmart the bad guys just like in the original film, but them not being able to speak what their feelings are and what they’re planning just lends itself to…boring scenes at times! It’s the same problem I had with the 1994 The Jungle Book film, but at least the animals were never the main focus of that movie!

Maybe people who are animal people could be more entertained watching the animals do things without talking, but for me, it was the biggest nail in this proverbial coffin!