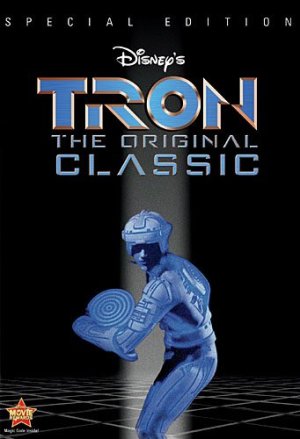 If you combined The Wizard of Oz with Wreck-It Ralph, Tron is probably the movie that you’ll get. Released in 1982, the film has since become a cult classic. Is it deserving of that title or is it a bit overrated? Let’s find out together as I honor the request of a reader, luminabalderson, and take a look at Tron!

(Due to being busy with finals, I wasn’t able to make this review as long or as funny as I wanted it to be. I apologize for that.)

The movie begins inside the inner workings of a popular video game called Lightcycle. We see that the “programs” and “characters” of the game are personified and exist in the computer system. This is a game that is produced by the computer company, ENCOM, and is “ruled” by a Master Control Program, or MCP, for short.

Inside the world of the video game, the various “programs” have some identity crises of sorts. Well, many of them believe that there are “Users” who created them. But, the MCP via his second-in-command program named Sark, played by David Warner, and his soldiers, often ends all “religious” talk of that sort as soon as possible! Programs that believe in “religious nonsense” are put to battle each other in a digital version of the Hunger Games.

Back in the real world, Kevin Flynn, played by Jeff Bridges, is a software engineer who used to work for ENCOM. He was actually the guy who created Lightcycle and other video games for the company. But the credit was stolen by another worker named Ed Dillinger, played also by David Warner. Because of that, Dillinger ended up becoming the Senior Executive Vice President of ENCOM, whilst Kevin was fired and now owns a video arcade.

But, Kevin tries his best to hack into the ENCOM system to find evidence of that states that he is the creator of Lightcyle and the other video games. But, the MCP discovers this and blocks his access to the system. The MCP also informs Dillinger about the attempted sabotage. It’s an interesting dynamic as Dillinger thinks he’s in control of the MCP, but in reality, the MCP is growing in power and pretty much has Dillinger under its control.

Kevin gets another chance to hack the system though via his ex-girlfriend and her boyfriend, Dr. Lora Baines and Alan Bradley, played by Cindy Morgan and Bruce Boxleitner, respectively. They also work for ENCOM and after some convincing from Kevin, they sneak him into the facilities at night so that he can hack the system directly.

Although they manage to sneak in, the MCP is aware of Kevin being there and activates a laser machine (that I can only describe as being a Wonkavision) at him. The “Wonkavision” was created by Dr. Baines and another doctor to digitize objects and transport them elsewhere. And that’s exactly what happens here: Kevin is digitized and transported directly into the computer system itself! He’s now a user amidst a world of “programs”!

Understandably, Kevin can’t believe what’s happened and the other programs there assume him to be just another program. He is soon put to compete against other programs, but escapes with two of them, Tron and Ram, played by Bruce Boxleitner and Dan Shor, respectively. The soldiers chase after them, but the trio gets separated from each other for a while. You see, they’re trying to access an input/output tower to communicate with Alan to figure out how to destroy the MCP. Destroying the MCP will get Kevin back to the real world and end the authoritarian grip that the MCP has on the system’s programs.

Ram later dies due to wounds, but Kevin traverses on to the input/output tower. On the way he realizes that since he’s a User, he can manipulate matter down there and even builds himself a flying vehicle.

Long story short, Kevin reunites with Tron and they get to the input/output tower, learn what they must do to defeat the MCP, and do it. Kevin is then zapped back into the real world where a nearby printer prints a file showing that Kevin was indeed the creator of these video games. Kevin goes on to become the CEO of the company, while Dillinger is presumably jailed, or at least fired.

And that was Tron. So, is it great or is it overrated? It was….amazing! It’s a milestone movie that helped audiences see what how CG can be used in films. Overall, the best part of the film was the amazing graphics, overall look, and CG effects that made us feel like we were in the Tron world!  Interestingly enough, the film was deemed unable to qualify for the Best Visual Effects award at the Academy Awards because they thought that using computers was “cheating”.

The story of the film was also engaging. It’s your digital The Wizard of Oz or Alice in Wonderland story. Instead of falling through a rabbit hole or getting transported in a tornado, our protagonist gets “Wonkavision-ed” into a computer system! And like The Wizard of Oz, all the main characters play counterparts of themselves in the digital world too!

The story does explore some deep concepts too like religion and totalitarian governments that control its population, especially its population’s religious beliefs. It parallels our world very well!

I only have two complaints to make about the film: First, the woman character, Dr. Baines, was quite pointless and seemed to only exist because they needed a female character, and a doctor one at that. But other than that, the character doesn’t do all that much and could easily have been removed! I don’t have a problem with the actress’ portrayal of the character, it’s just that she doesn’t have all that much material to work with anyway!

And secondly, why is this movie is called Tron? Surely Kevin Flynn was the main character and although Tron was important, I don’t think he was important enough to warrant being the title of the film! Nevertheless, these are minor issues.

This movie almost got 100% from me, but as I’m not that well-versed in judging musical scores (since I barely notice them), I usually give 4 out of 5 points by default in that category. So if you personally think that the music was amazing and the film deserves a 100%, I won’t argue with you. As for me though, this film will get the 2nd highest score on this blog and there’s nothing wrong with that! 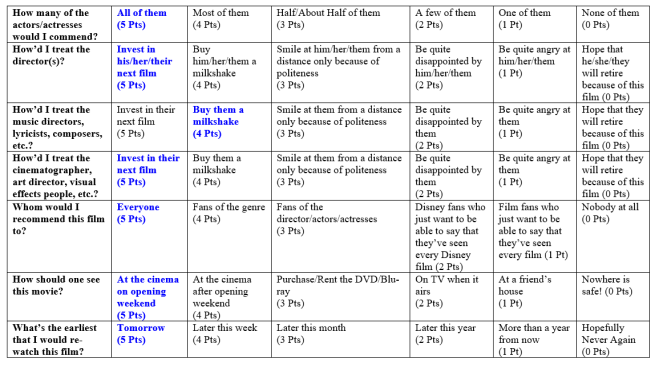