Today’s review has been requested by a longtime follower of the blog, oscarstainton. I’ve been reviewing a lot of films recently dealing with animals, jungles, and the like and this one’s no different. Arguably, the most famous cinematic ape is King Kong. But, the creators of the 1933 King Kong film made another film in 1949 also centered around a massive ape entitled, Mighty Joe Young. Disney would remake this film in 1998 which would end up flopping at the box office! So, is this film truly a monster or is there beauty hidden within? Read on to find out!

The movie begins somewhere in the African jungles (or whatever the geographically correct term is) where a Jane Goodall-type scientist resides to study the apes. She lives on the nature preserve there and has dedicated her life to studying these creatures all while raising her young daughter there as well.

One day, some poachers infiltrate the preserve and kill one of the gorillas. They try to steal its baby, but the Jane Goodall-type lady (yes, she has a name, but I’m just gonna call her the Jane Goodall-type lady) intervenes in time. She manages to save the baby gorilla (after it bit off two fingers off one of the poachers), but gets killed in the process. Her daughter is then left to take care of the baby gorilla, Joe, as they both grow up together on the preserve.

Fast-forward 12 years where we see an American wildlife director, Gregg O’Hara, played by Bill Paxton, visiting that same preserve to collect blood samples from the animals there. He even ventures into an area that most people stay away from as a legendary beast is supposed to reside there. As you can expect, Gregg eventually comes into contact with this beast who turns out to be the gorilla baby, Joe. Well, Joe ain’t a baby anymore; he’s now a 16-ft tall beast!

Seeing the massive creature, Gregg feels like a kid in a candy store and tries to get a blood sample from Joe. This is futile however, as Joe puts up a fight against Gregg and his men and flees deeper into the jungle. Gregg follows Joe into the jungle and is almost attacked/killed by him when a woman shows up and intervenes. Joe drops Gregg and Gregg wakes up sometime later in an infirmary after being knocked unconscious from the drop.

After being healed, Gregg heads to the local market and sees that same woman who saved his life there. He surreptitiously follows her back into the jungle and sees that she’s actually friends with the mighty Joe. They hang out together like friends, get along like friends, and even play games like Hide-and-Seek.

It’s not long though before the woman and Joe realize that they’re being watched and confront Gregg about it. Gregg tells the woman that he knows who she is (somehow), that she’s Jill Young, the daughter of the scientist who was killed in the beginning of the film.

Jill, now played by Charlize Theron, has spent her whole life protecting Joe from poachers and the outside world by keeping Joe as deep in the preserve as she can. Now that the secret is out though, Gregg suggests to Jill that Joe should be moved to a conservatory in California that he works at. Jill, protective as ever of Joe, rejects this and wishes that Gregg go back to California and leave them be. But after Jill realizes that there’s an imminent threat of poaching, she reluctantly agrees although still watchful and suspicious of Gregg.

They all then travel to California where Gregg shows Jill the conservatory as well as the other caretakers at the place. Joe is placed in his own pen at the conservatory which Jill would have access to. The story is, not surprisingly, covered by the news.

The news even makes its way back to Africa where an Andrei Strasser, played by Rade Šerbedžija, is captivated by it.

Mr. Strasser happens to run a “private zoo” in Botswana which he uses as a cover for illegal poaching activities. As you can imagine, that’s one of the reasons Mr. Strasser is interested in Joe, but there’s another reason. You see, Mr. Strasser was the poacher who killed Joe’s mother and the poacher whose two fingers Joe bit off. Wanting revenge, Mr. Strasser books a flight to California along with one of his henchmen.

When they arrive in California, they travel to the zoo to gaze upon Joe. Mighty Joe actually recognizes Mr. Strasser and his henchman as being the ones who killed his mother. This causes Joe to go crazy which has Jill worried. She, of course, doesn’t know the reason that Joe’s upset, but she wants an upcoming benefit dinner in his honor to be postponed so that Joe can get better. The people in charge deny this request and the benefit dinner goes on as planned. Mr. Strasser has also crashed this party and secretly goes to Joe’s pen to rile him up some more. Infuriated, Joe breaks free from his pen and tries to attack Mr. Strasser resulting in him attacking the benefit dinner and its guests of honor!

The news gets hold of this incident and as you can expect, lawsuits are filed against the conservatory. Joe is put away in a special bunker as the conservatory can no longer take care of him. But, Gregg and Jill (who have slowly fallen in love with each other) decide to break Joe out of there with the help of some of the workers at the conservatory. They load Joe into a big semi-trailer truck at night before anyone can find out. Jill heads into the front of the truck with two of the drivers as they drive away w/Joe whilst Gregg stays back at the conservatory so that he can deal with the conservatory people there when they find out Joe is missing.

But, Gregg soon discovers a sort of rattling tool used by poachers amongst the dinner party debris and realizes that the guys driving the semi-trailer truck are poachers! Meanwhile, Jill notices that the driver is missing two fingers which makes her remember the incident of her mother’s death. That’s when she realizes the drivers are poachers, Mr. Strasser and his henchman, and are the ones who killed her mother!

She tries to fight them off which results in the truck crashing and Joe escaping into the city. He eventually ends up at an amusement park followed by Mr. Strasser, Jill, Gregg, and the police.

The climax takes place here when Joe settles the score once and for all and throws Mr. Strasser onto an electrical line instantly killing him. Meanwhile, a fire has engulfed the amusement park, in particular a ferris wheel that has a boy trapped on the top. Joe sees the boy and saves him, but falls from the ferris wheel. The boy is okay, but Joe seems unresponsive. Jill tries to find a heartbeat in Joe, but can’t. It looks like our mighty Joe is dead. The beauty of humanity in everything has killed the beast.

Ok, that’s not how it ends. As you probably guessed, Joe actually survives and everyone is elated about it! But, Gregg and Jill don’t know what to do with him now. He has nowhere to stay in California. They want to take him back to a preserve in Africa, but don’t have any money for that. Fortunately, the policemen and onlookers are grateful to Joe for saving the boy that they all donate money to send Joe back to Africa. It’s there that Joe, once again, enjoys life while still having Jill and Gregg there with him. The beauty of humanity has saved the beast.

And that was Mighty Joe Young. So, did I like it? Honestly, this is a movie that I’m unsure of whether or not I like it. I mean it wasn’t an unpleasant viewing experience, but I also didn’t find the story or characters all that compelling. The villains were mere poachers with not much depth to them besides that. Gregg and Jill were just animal-loving scientists with not much depth to them.

Bill Paxton and Charlize Theron’s acting were ok. Sometimes Theron was bad, but mostly she was ok. Most of the acting in the film was just ok. The best performance was that of the gorilla though! For the scenes where he was actually performed by someone, that guy deserves commendations aplenty! And the best scenes of the movie were in the last half hour where we see the mighty ape in different parts of the city. 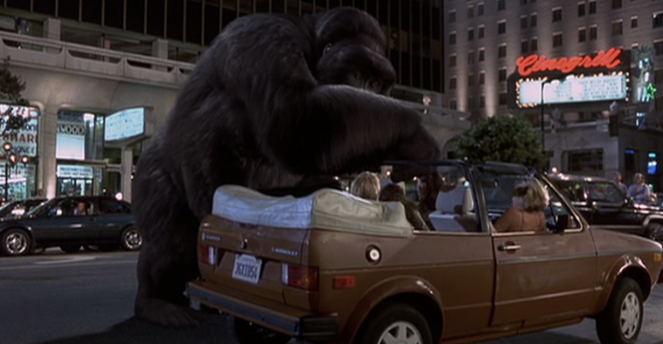 In short, watching this movie isn’t really a waste of time, but at the same time, I don’t know if you’ll be fulfilled either. The story is not all that fleshed out and neither is anything else. “Mighty” is definitely not a word to describe this film, but “horrible” isn’t either.