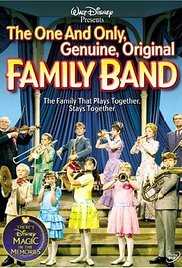 If you’re like the normal person in the street, when you think Disney movies, you think political plot points!

Yeah, I was being sarcastic. Even I was surprised after watching this movie that politics played an integral part to this movie’s plot. Based on a memoir written by one of the characters in the film (I don’t know how loosely or strongly this film is based on the memoirs), this musical film is not well-known, as you might imagine. So without further ado, let’s jump into reviewing The One and Only, Genuine, Original Family Band!

The film takes place in Midwest America not long before the 1888 presidential election. This year, the candidates are Democrat Grover Cleveland and Republican Benjamin Harrison. As it so happens, our main characters, the Bowers are a family that are pretty Republican. The family consists of the father, Calvin Bower, played by Buddy Ebsen, his wife, Katie Bower, played by Janet Blair, and their 8 kids including their eldest, Alice, played by Lesley Ann Warren. Together, they are part of their own family band.

There’s also another member of this family: the grandfather (Calvin’s father), Rensselaer (or however the heck you spell/pronounce that) Bower, played by Walter Brennan. Let’s call him Grandpa Bower for the remainder of this review, shall we?

The problem here is that unlike his family, Grandpa Bower, is a staunch Democrat in support of Grover Cleveland. Because his politics differ with that of his family, Mrs. Bower has made a rule that no politics should ever be discussed at home. Everyone seems to follow this rule and they all get along like a loving family. Grandpa Bower is also the head conductor of the said family band.

On this particular day, the household, well, at least, Alice, is quite excited. Why? Well, she’s been in correspondence with a young newspaper fellow named Joe Carder. They’ve never met before, only communicating via letters and it seems that a relationship is sparking between them. On this particular day, Joe is on his way over to the Bowers’ home to meet Alice and the family for the first time. When Alice hears that someone is at the door, she enthusiastically rushes to the door, opens it, and looks at what may be the face of her future husband.

Ok, she’s a bit surprised by this somewhat older man appearing at the door, but is politely optimistic that the best can be made of this situation. After conversation starts to get a bit awkward, the man introduces himself as a Mr. Henry White, head of the Democratic National Committee, played by voice actor, William Woodson. He’s here to see Grandpa Bower in regards to a Democratic campaign song that Grandpa Bower submitted and thought the DNC could use.

Alice is joyfully happy at this faux pas and quickly gets her grandfather to meet Mr. White. Grandpa Bower then sets Mr. White down while he conducts his family in singing the song he wrote for the convention, Let’s Put it Over with Grover.

Mr. White thinks the song is quite good and wants Grandpa Bower and the family band to go to St. Louis to sing the campaign song there at the convention. The family is excited about this and Mr. White goes on his way. The family then celebrates by goofing off a bit when all of a sudden, the real Joe Carder, played by John Davidson, enters upon them, and boy, is Alice not too happy that he saw her in this state of play and amusement!

Alice soon gets over her embarrassment and she and the family get to know Joe better. He’s from the Dakota Territory and praises the area. He mentions how they’re looking to be accepted into the US as two separate states following the next election: North Dakota and South Dakota. That way they can send four Republicans to the Senate! When Grandpa Bower hears of this, he’s quite upset as he feels they should only be one state at most, thereby reducing the number of Republicans sent to Washington DC. As you can imagine, he and Joe don’t really get along politically-wise.

Nevertheless, Joe invites the Bower family to a Republican get-together that he’s holding enticing people to move to the Dakota Territory. He sings a song entitled, Dakota, which according to unconfirmed Internet sources was once considered to be the official state song of South Dakota.

After hearing about the Dakota Territory, the Bowers are quite interested in moving up there, but they know if they move, they won’t be able to go to St. Louis for the DNC which would break Grandpa Bower’s heart. Grandpa Bower overhears the family’s concerns and sacrifices his desire to play for the DNC by encouraging the family to move to the Dakota Territory. So, problem solved!

When the Bowers get to Dakota, they find the people of Dakota welcoming in the beginning, but somewhat cautious when they find out that Grandpa Bower is a Democrat. When a riot starts to occur amongst the townspeople and Grandpa Bower, a bet is then made: If Grover Cleveland is re-elected president, Joe will push Grandpa Bower down the road in a wheelbarrow. If Benjamin Harrison gets elected, then Grandpa Bower will push Joe.

Alice gets a job as the local teacher since the school has been closed for who knows how long due to lack of a teacher. However, she has to cancel school on her first day because the school council wants to review her first and making sure she won’t be pushing any Democratic ideology on the students. Joe takes Alice to see the school council, but they make a little detour on their way there to sing a love song to each other about getting engaged entitled, Bout Time!

Meanwhile, Joe has sent Grandpa Bower to the school to dismiss all the kids who went there expecting class. I guess the school’s official Twitter feed wasn’t working for them to send an announcement there. Anyway, the kids are happy, of course, to have no school, except for a little girl who was so looking forward to giving a recitation at school. She had practiced so hard the night before and got all dressed up and everything.

Feeling sorry for the girl, Grandpa Bower calls all the kids back so that they can have a little time together at school in which he will be the teacher. The little girl gets to give her recitation and she’s happy.

Soon, Grandpa Bower’s Democratic-ness manifests itself when he tells a student that the Civil War should actually be called the War Between the States. Then, he starts getting into arguments with the students of how the Republicans wanna break the Dakota into two states instead of one. He then persuades the kids that they should have a say in the politics of their territory and that it shouldn’t just be up to the adults. He sings a song called Drummin’ Drummin’ Drummin’ about a drummer boy in the Civil War to further show the kids that kids can make a difference.

Calvin Bower decides that it’s time for him to have a talk with his father and they go into a woodshed behind their house for a somber moment. Calvin tells Grandpa Bower how he tolerated a lot of Grandpa’s actions, but wouldn’t tolerate Grandpa doing anything to break up the relationship between Alice and Joe. So if Grandpa Bower wants to remain a member of the household, he has to learn to exercise self-control and not spew his political opinions out all the time.

Grandpa Bower feels hurt by all this and takes it as a hint that he’s not wanted. So he packs up his bag and leaves the Bower household.

Soon, there’s a townhouse meeting going on to discuss what happened at the school and everyone blames Alice thinking she sent her grandfather to the school that day. They’re getting ready to vote on whether Alice should be fired as a teacher, but Alice goes up and quits before this can happen.

But, Grandpa Bower comes into the meeting and apologizes for what he’s done. He realizes that he shouldn’t have preached his opinions like he did and makes a proposition with the townspeople: He wants them to rehire Alice as a teacher so that the school won’t close again and in return, he won’t say anything else about politics. The townspeople agree to this and Calvin invites Grandpa Bower to come back to their home.

Soon, it’s the time of the Election Carnival when the election results are coming in. All the townspeople are partying, the Bower household is performing in their band, and an incredibly catchy tune called, West of the Wide Missouri, is sung and danced to by everyone.

It’s not long before the voting results come in via wire, showing that Grover Cleveland won more votes than Benjamin Harrison. As you can imagine, all the Democrats are happy! Grandpa Bower is all ready for Joe to push him in the wheelbarrow when a sort of plot twist happens.

The final results come in saying that Benjamin Harrison has won the presidency! How is this possible? It’s because Benjamin Harrison won more votes according to the Electoral College which is how presidents are determined in this country!

Grandpa Bower doesn’t understand all of this, but concedes when he finds out that in addition to making North Dakota and South Dakota states, Washington and Montana will also be joining as states. So, there are now more chances of Democrats being sent to Washington D.C. The movie ends with Joe and Alice making up and Grandpa Bower pushing them down the street in the wheelbarrow.

And that’s The One and Only, Genuine, Original Family Band! And…I like it!

It’s not a perfect film nor one of Disney’s best, but it holds itself up pretty well. The film’s message about tolerating and respecting other’s opinions, especially political opinions  is something that we need more of in this day and age, especially in America during this upcoming election season!

The acting is pretty good for the most part with Walter Brennan and Buddy Ebsen giving great performances. Apparently Walter Brennan’s part was offered to Bing Crosby at one point and as much as I’d love to see Bing Crosby in a live-action Disney film, I really enjoyed Walter Brennan’s performance. I feel I should also mention that Kurt Russell and partner Goldie Hawn also appear in this movie. They barely appear in it, but they appear, nonetheless.

Overall, the film isn’t one of the greatest and like I said, I’m not 100% sure how strongly or loosely this film is based on true events, but it’s a delight to watch! Doing this project has helped me view Disney treasures that I would have otherwise not known about. I wish that this film was more well-known and highly recommend all my readers to watch it!

The next review will be posted on February 29th.