Who would have thought that a film originally intended to be a racy R-rated parody of Disney’s beloved classics would end up being what many people would consider a modern-day classic? That’s a fairy tale in and of itself! Today, we take a look at that film that reminded us of what we loved about Disney classic films in the first place, Enchanted!

The film opens up to basically every classic animated Disney trope that you can think of: a narrator narrating the story to us via the use of a storybook, a kingdom named Andalasia ruled by an evil queen named Narissa, a traditional “Prince Charming” type of character named Edward who is Queen Narissa’s stepson, and a lovely maiden named Giselle who dreams of finding her true love.

Prince Edward happens to meet Giselle one day and both fall in love with each other. They decide to get married which of course angers Queen Narissa because she’ll lose her claim to the throne then.

Before we get any further, let’s talk about these first few minutes for a bit. Firstly, these scenes are all animated and I simply LOVE the animation! It is extremely colorful and surprisingly sharp! I can honestly say that this quality is better than some of Disney’s own animated canon films! Heck, had this movie been 100% animated in this style, I would have been in picture-perfect heaven! 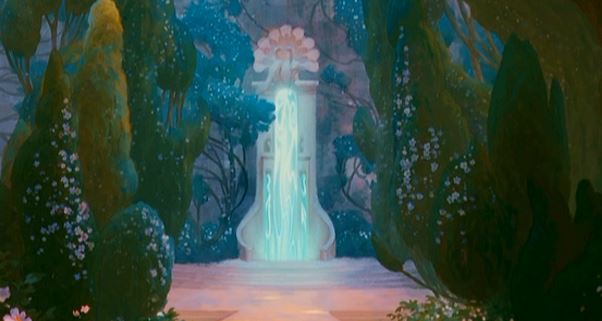 Secondly, these first few scenes are paying homage to as well as parodying the Disney classics of yore. And I personally feel that they’ve done this flawlessly and with utmost respect! It manages to have the laughs that a parody should have while also keeping the respect that an homage should have. They could have gone an entirely different route by making fun of these old films and criticizing them for not having “new, modern, progressive ideas, etc.”. I’m so glad that they didn’t do that!

Thirdly, the music of this film is being done by Disney legends Alan Menken and Stephen Schwartz. And it’s just a delight hearing these songs that are so reminiscent of classic Disney and the Disney Renaissance while also being entirely their own compositions! My favorite song in the film is a duet that Giselle and Prince Edward sing in the beginning of the film entitled, True Love’s Kiss.

So far, I have nothing bad to say about this movie. Let’s go back to the plot. Queen Narissa decides to do away with Giselle by transforming herself into an old hag and convincing Giselle to look down a magical wishing well. As Giselle peers into the well, Queen Narissa pushes her. Giselle falls down into the well and lands in a live-action place devoid of “happily-ever-afters”, New York.

Giselle, played by Amy Adams, is instantly confused about where she is and why the people there lack the kindness and sincerity that her fairy tale friends have. Nevertheless, her naïveté and good-naturedness keeps her spirits up as she tries to find her way back to Prince Edward’s castle. When she doesn’t succeed in this, she’s still hopeful that Prince Edward will come to her rescue.

Before that happens, Giselle comes into contact with a divorce attorney named Robert, played by Patrick “I’m-not-too-sure-why-women-go-nuts-over-you” Dempsey.

Robert is a single father of a young girl named Morgan, played by Rachel Covey. Morgan’s mother left them and ever since then, Robert has been a stickler to believing in rationale and logic and giving up ideas of fantasy, fairy tales, true love, etc. He has tried to instill these ideas into his daughter, but of course being six, Morgan wants a life that’s a bit more interesting.

Morgan gets her wish when they bump into Giselle who is all dressed up in princess clothes and babbling on about fairy tale life. And of course, Robert isn’t too sure that Giselle has all her screws intact, if you know what I mean. He lets Giselle come home with them so that she can freshen up and catch her bearings, but she ends up falling asleep on the couch. Seeing her sleeping peacefully, he doesn’t bother her and allows her to spend the night there.

The next morning, Prince Edward finds his way to New York via the help of Giselle’s chipmunk friend who witnessed her falling down the wishing well, Pip. When they arrive in New York, Prince Edward, played by James Marsden, and the once loquacious Pip who can barely utter a sound in the real world as a CGI chipmunk, set out to find Giselle.

When Giselle awakes in Robert’s apartment, she realizes that it’s quite messy and calls for her animal friends to come help her clean. Instead of getting the aid of beautiful, animated forest creatures like she would in Andalasia, she instead gets the help of rats, pigeons, cockroaches, and what appear to be, flies.

As they all clean, Giselle sings Happy Working Song, which is reminiscent of past Disney songs such as Whistle While You Work and Sing Sweet Nightingale.

Later that day, Robert’s fiancée, Nancy, played by Idina Menzel, comes over to spend some bonding time with her soon-to-be stepdaughter, Morgan.

But Nancy ain’t too pleased to see Giselle hanging around Robert’s place.

This causes a fight between Nancy and Robert resulting in Nancy leaving.

Meanwhile, in Andalasia, Queen Narissa is worried that Prince Edward might actually be able to find Giselle after all. To combat this, she feigns affection for her stooge, Nathaniel, and persuades him to go to New York to prevent Prince Edward from finding Giselle. In return, Queen Narissa will be his. And like all guys do when a girl we like promises to like us back, Nathaniel immediately accepts and heads to New York.

Timothy Spall really does an excellent job playing the lovable stooge, Nathaniel. He’s not really evil; he’s just willing to do whatever the woman he loves wants him to do. What does she want him to do in this case? She wants him to find Giselle and get her to eat a poisoned apple.

Nathaniel does his best to accomplish this task, but time after time fails. As this goes on, we see more of Robert and Giselle hanging out together with Robert trying to get Giselle off his hands and Giselle annoying him with her constant cheeriness, positivity, and singing. This is evident when she bursts out into a song entitled, That’s How You Know.

Soon after, Edward manages to find Giselle and Giselle’s excited to see him, but after being exposed to New York culture, she has a strange request. Instead of rushing to get married, she would like her and Edward to go out on a date. Edward is a bit baffled as to what a date is, but goes along with it to make Giselle happy. They even go to a ball that is taking place in the area. Funnily enough, Robert is also going to that ball with Nancy.

At the ball, Queen Narissa, played by Susan Sarandon, shows up. She’s gotten tired of Nathaniel being unable to do the task, so she’s decided to come to New York herself. She poses as the old hag again and gets Giselle to take a bite of it causing her to go into a coma-like state. Both Robert and Edward are alarmed when they find out about this and realize that only true love’s kiss can save Giselle. Edward kisses Giselle, but…nothing seems to happen.

Robert realizes then that the kiss didn’t work because the one who is truly in love with Giselle and she with him is Robert himself. With Nancy’s permission, he kisses Giselle and Giselle wakes up. This infuriates Queen Narissa causing her to transform into a dragon a la Maleficent and have one final battle against Giselle, Robert, Edward, and Nathaniel (who’s since joined the good guys once he realized that the Queen is just using him).

Giselle staying in New York with Robert and Morgan,

Nancy and Edward finding solace in each other, heading back to Andalasia, and getting married,

Nathaniel staying in New York to become a best-selling author,

and Pip going back to Andalasia, getting his voice back, and becoming a best-selling author as well.

And that was Enchanted. What is there to say except it was a really great film?

I can’t say that it’s a favorite of mine, but honestly, it’s really hard to find problems with it. Almost all the actors portrayed their characters incredibly believable with the only exception being Idina Menzel. I personally found her not trying hard enough. The irony of the situation is that she was happy to be cast in a film where she wouldn’t be singing, i.e. she was being cast for her acting abilities only.

The storyline was perfect as I’ve said before paying just the right amount of parody and homage to make the film respectful of the films it was trying to pay tribute to. It was especially awesome to see a few Disney Princess voices in the film!

The music was overall really good and I still think the animation was the best part of the film!

If I could make two tiny nitpicks about this movie: One, I wasn’t too fond of Queen Narissa’s design because she looked like a mashup of The Evil Queen and Maleficent, but maybe that was the intention.

And two, I was a bit amazed that when these fairy tale characters arrived in the real world, it didn’t really take them long to learn about how to use the various technologies that our world has. You’d think that would have taken them forever to understand, but nope.

A sequel is currently being planned for this film. I personally don’t think it needs a sequel, but it’ll be interesting to see how that will turn out.

The next review will be posted on June 29th.