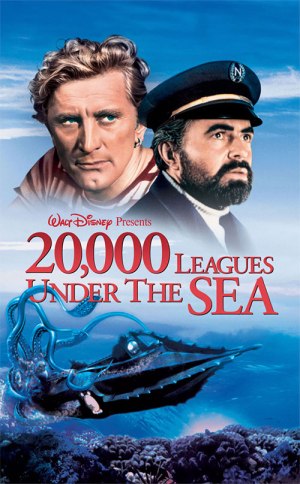 Who doesn’t love a Jules Verne novel? His novels are just great adventure/scientific/steampunk-ish lore that it appeals to everyone with a sense of adventure. And the adventure genre lends itself to great expression through film. And 20,000 Leagues Under the Sea is no exception! This Disney film is actually the most famous film adaptation of the novel.

In quite an interesting turn, this film was directed by Richard Fleischer.

Why was this interesting? Because he was the son of Walt Disney’s animation “rival”, Max Fleischer.

Yeah, not every person can employ his competitor’s family members. Even Richard Fleischer was a bit surprised that Walt Disney approved of him directing the film. He even asked Walt if he knew who he was. Walt replied yes, but that he was the right man for the job. And his father, Max Fleischer also supported this decision and wasn’t mad that his son was working for his competitor. And people say that filmmakers are cold-hearted money-grabbers!

Anyway, let’s take a dive into (see what I did there) this review of 20,000 Leagues Under the Sea. Before we begin, I must let you all know that I’ve had some problems playing this movie on my laptop, hence I wasn’t able to get any screenshots from the film as I usually do. As a result of that, this review will be shorter than usual, so I hope you’ll forgive me.

Taking place in 1868,  news of a sea monster attacking ships in the ocean spreads and a sort of mania surrounding the monster captivates people’s minds. Common folk are either fascinated by or afraid of the monster, con men use the monster to their advantage, and scientific men embark on aquatic expeditions to prove or disprove the existence of this alleged monster.

Once such expedition invites the French Professor Aronnax, played by Paul Lukas, and by extension, his assistant, Conseil, played by Peter Lorre, to help find this monster.

The professor is glad to be invited and accepts graciously. After spending months searching for the monster, most of the crew aboard the ship give up on the idea that such a monster exists. But, like in all movies, that’s the exact moment when the monster shows itself. The monster attacks the ship, damages it, and ends up killing nearly everyone aboard.

The professor and Conseil along with a harpooner named Ned Land, played by Kirk Douglas, manage to survive, although they’re stranded in the ocean. Searching for something that floats to which they can hold on to, they come across a large object in the ocean. It turns out to be a submerging ship, a submarine, if you will.

Professor Aronnax is amazed at the invention as nobody has ever invented such a thing before! The submarine seems abandoned and he takes it upon himself to explore inside the submarine. The submarine has everything: multiple rooms, a fully stocked kitchen, a grand piano, running electricity, etc. He soon realizes that the alleged sea monster was this submarine the whole time!

Conseil and Ned, on the other hand, aren’t too ecstatic to be on such a craft and want to leave before being caught by the crew of the submarine. It isn’t long before the crew of the ship surface from below the water’s surface (after performing an underwater burial for one of their colleagues) and the trio are captured.

The captain of this submarine is named Captain Nemo and he’s played superbly by James Mason. May I just say that James Mason’s performance here is one of the best performances I’ve ever seen! You don’t see James Mason…you see Captain Nemo! He’s as good as Emma Thompson was in Saving Mr. Banks and I’m shocked that he wasn’t nominated for this role.

Anyway, Captain Nemo is a man who’s unwilling to treat trespassers mercifully and sentences the three men to death by drowning in the sea. Well, he’s sympathetic to Professor Aronnax, as he’s familiar with the professor’s scientific work, and allows him to stay. But, Ned Land and Conseil must be put to death. Professor Aronnax refuses to leave his friends and after seeing the professor’s devotion to his friends, Captain Nemo changes his mind and keeps the three of them aboard as prisoners/guests.

As the movie progresses, Captain Nemo and his crew continue traversing under the ocean. Ned Land and Conseil aren’t happy to be on the submarine and develop a dislike to Captain Nemo, especially Ned Land. Professor Aronnax, on the other hand, becomes quite interested in Captain Nemo and tries his best to learn more about the captain.

We eventually learn that the submarine is called the Nautilus and was built by Captain Nemo and his crew so that they could live under the waters away from the injustices of mankind above land. They were once prisoners aboard a penal colony, but manages to escape to a remote island called Vulcania where was where they built the Nautilus. The source of the Nautilus’ power is nuclear energy, a fact hinted to by the film and apropos to the Cold War era that this film was made in.

When hearing about Nemo’s technological prowess, his wife and son were tortured to death because they wouldn’t reveal knowledge regarding where Nemo was or how he built the submarine. This instilled hatred into his heart and was the main reason for Nemo’s mission to destroy ships that supply weapons or other means of mankind’s demise.

It’s this deluded logic that has us all wondering whether Captain Nemo is a genius or a madman as the delineating line between them is very thin. Even Professor Aronnax is in two minds as he’s appalled at the murder that Nemo is willing to commit, but also feels it’s his right to show Nemo that he can change and that he needs to share his creation with the world!

Captain Nemo pays no mind to the professor’s point of view and continues on his way to his eventual destination: Vulcania. When Ned finds out about this, he decides to write letters disclosing this information, stuffing them in bottles, and throwing them into the sea in an effort that someone will find them and rescue them from Nemo’s clutches.

One of the letters gets through and a warship soon comes into contact with the Nautilus before it reaches Vulcania and starts shooting. As a result, the Nautilus dives deeper than it’s ever done before where it becomes entangled in the tentacles of a giant squid. The crew and Nemo go into the water to free the Nautilus from the squid’s clutches and almost fail, until Ned comes out, stabs the creature, and saves Nemo’s life.

This act of kindness from his prisoner instills a slight change in Nemo and his view of the world. But as they near Vulcania, we see the island surrounded by warships ready to attack. The Nautilus enters through a secret underwater passage and Nemo sets a bomb on the island to destroy his work and all the soldiers who’ve come to raid the island.

He then gets shot, but makes it back to the Nautilus for a final descent. He realizes he’s dying and says that the Nautilus and everyone on board will go down with him. This, of course doesn’t sit well with Ned, Conseil, and the Professor, who are sent to be locked in their rooms. But, they manage to fight off Nemo’s crew and escape from the submarine just before Nemo dies taking the Nautilus with him.

Our trio looks on as the Nautilus heads down to the depths of the ocean. They realize that no trace of their adventure will ever be found or believed as the Professor left his journal (in which he was writing daily entries) on the Nautilus.

The movie’s strength lies so much on the depth of its characters, mostly that of Captain Nemo. You sympathize with him and you’re scared of him. You acknowledge his genius and you fear his madness. You justify his logic and you’re horrified by his logic. He’s one of the deepest characters you’ll ever find in film.

The Professor has a deepness to him too. He recognizes the bad in Captain Nemo, but decides it’s better to stay with him and convince the Captain of the good in him, rather than just walk away and leave the Captain to destroy himself.

The plot is engaging and the sets are simply what one would expect from an ocean tale. This movie is just awesome! 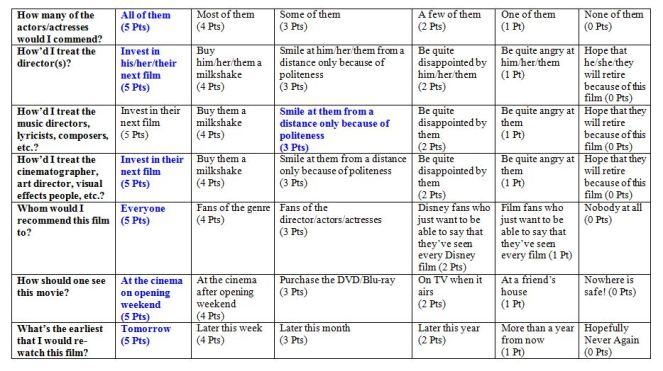 The next review will be posted on November 24th.

Leave a Reply to The Animation Commendation Cancel reply