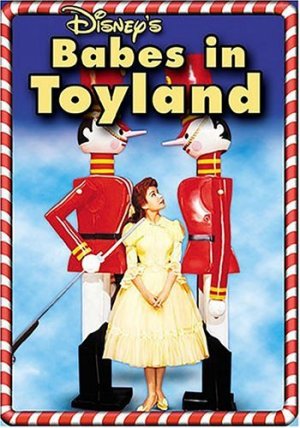 When people think of live-action Disney musicals, films like Mary Poppins or Bedknobs and Broomsticks come to mind. But the first live-action musical film that Walt Disney made was the 1961 film, Babes in Toyland. Based on an operetta of the same name, this would be only the 2nd theatrical adaptation of the film (the other being with Laurel and Hardy) and the first to be shown in Technicolor.

Is it worth watching? Should we give a darn about this Toyland place? Well, let’s find out!

The film opens up to the joyous town of Mother Goose Village which is inhabited by nursery rhyme characters such as Little Boy Blue, Little Bo Peep, Jack and Jill who went up the hill, Jack who jumped over the candlestick, etc.

Two of these nursery rhyme citizens in particular are Tom Piper and Mary Contrary played by Tommy Sands and Annette Funicello, respectively. They’re both in love with each other and plan to get married soon. This is evident by their feelings of joyousness that they emit whilst singing and dancing with all the townsfolk.

Let me just say one thing: this movie was Walt Disney’s first live-action musical film and it shows! I personally am not a fan of ANY of the songs/musical pieces in this film! I mean some of them are tolerable and can get a smile out of me, but in the end they’re all forgettable songs and sequences that are better skipped, hence I won’t be referring to the songs much in this review, but you can know for a fact that the music section won’t be getting a good rating from me.

Continuing on with the story, everybody in Mother Goose Village is happy for Tom and Mary’s wedding except for the evil Mr. Barnaby.

Mr. Barnaby, played by Ray Bolger of The Wizard of Oz fame,

is your typical over-the-top enjoyable baddie with an awesome smokestack-like hat and a villainous mustache. He wants to marry Mary for himself so that he can take her inheritance that she’s soon to…umm…inherit.

And like all stereotypical villains, he uses henchmen to get his evil deeds done rather than doing it himself. He hires two men named Gonzorgo and Roderigo, played by Henry Calvin and Gene Sheldon, respectively, to kidnap Tom, throw him into the sea, and steal Mary’s sheep. This way, with Mary’s lover AND source of income out of the way, Mary will be forced to marry Mr. Barnaby.

So, Gonzorgo and Roderigo knock out Tom one night when he’s alone. As they head towards the sea, they come across a forest with some gypsies.

Gonzorgo then gets an idea and suggests that instead of throwing Tom into the sea, they could sell him to the gypsies. That way, they’ll get double pay AND Tom will still be out of the way just as Mr. Barnaby wanted! But we all know that in movies when the henchmen steer from the plan, someway or another, it’ll backfire on them!

The next day, Mr. Barnaby shows up at Mary’s house nonchalantly as she’s getting ready for the wedding when all of a sudden, Gonzorgo and Roderigo enter upon them pretending to be sailors. While there, they tell Mary (through song, of course) that Tom realized that he was too poor to marry Mary and instead ran away to sea and died during a storm on a ship. He also had mentioned in a goodbye letter that he wrote that Mary should marry Mr. Barnaby instead.

Mary takes the news hard as can be expected, but when the sailors go away, Mr. Barnaby tries his best (through song, of course) to convince Mary to marry him which she quite staunchly refuses. She tells him that she’ll never marry for just wealth alone and that she’ll always have Tom in her memory.

But she soon discovers that her sheep have disappeared into The Forest of No Return. Later that night, she starts to reconsider Mr. Barnaby’s marriage proposal as she sings a song about the increasing prices and debts that she has and that she has poor mathematics skills to figure out how to live off well by herself and care for her younger brothers and sisters (she has like 5). Now I know that many people view this song as “sexist”, but I personally find this song to be my favorite in the whole movie and view it more as Mary’s inability to comprehend mathematics rather than women’s inability to comprehend mathematics. And it’s also super trippy, so that’s great too!

Eventually she realizes that the sensible thing to do is to marry Mr. Barnaby. Mr. Barnaby is elated at this news and wakes the whole town up to announce their wedding as well as invite some gypsies to perform in honor of the celebration. Wait a minute…gypsies?

That’s right, the gypsies that Mr. Barnaby hires serendipitously happen to be the same gypsies to whom his bungling henchmen sold Tom. After performing a song-and-dance, one of the gypsy women starts taking off her clothes to reveal her true identity: Tom!

He quickly announces to the world what Mr. Barnaby did and reunites with his love, Mary!

No, we’re not done yet! Come on, that’d be really stupid if the movie ended here. I mean, we still haven’t got to Toyland yet. Oh yeah, remember that? The title mentions about being in a place called Toyland, yet we STILL haven’t heard about this place at all!

Anyway, back to the story: Mr. Barnaby manages to escape from the crowd as does his henchmen who are afraid of what Mr. Barnaby will do to them.

Meanwhile, Tom and Mary get re-acquainted until they discover that Mary’s younger siblings have all gone into The Forest of No Return to look for the lost sheep. Mary and Tom head into the forest and luckily meet up with the children, but they are soon taken captive by some trees…yeah, the trees are alive and take prisoners.

Anyway, the trees tell them that they’re on private Toyland property and must appear before the Toymaker to decide what must be done with them. An hour into the film and FINALLY we have a reference to the place in the film’s title!

When they reach Toyland, they see it’s a majestically built happy-looking place, but that the Toymaker is a bit upset. The Toymaker, played by Ed Wynn, has to meet his Christmas deadline so that every child can receive a toy. But after accidentally destroying an automated toy-making machine invented by his apprentice, Grumio, played by Tommy Kirk, the chance of making that deadline seems nigh impossible.

Luckily, Tom, Mary, and the five children offer to help the Toymaker make toys and offer to work all day and night. Wow, what a deal! And of course, the Toymaker agrees.

So the kids help the Toymaker make his toys (while singing about it, of course) and they do a decent day’s work bringing confidence to the Toymaker that he’ll make his Christmas deadline after all. As night falls, the Toymaker heads to bed as well as Mary’s younger siblings. So much for working ALL DAY AND ALL NIGHT!

As the night progresses, Grumio shrieks with joy as he has invented a new invention which he hurries to show Tom, Mary, and the Toymaker. He invents a sort of shrinking gun that is able to shrink any life-sized object down to toy-size in an effort to save time on actual assembling of the toys. The Toymaker is quite pleased with this until Tom points out one flaw: Where are they going to get enough life-sized objects to shrink into toy-sized objects to make their deadline?

But, the shrink gun does prove useful to someone else: Mr. Barnaby! Mr. Barnaby (along with his two henchmen whom he has given a second chance to) has been following our protagonists into Toyland and once night falls, he gets ahold of the shrink gun

and puts it to work shrinking the Toymaker, his two henchmen (who have changed their tune and threaten to expose him), and Tom. He then ties and/or locks the latter three up in cages and forces the mini Toymaker to legally marry him with Mary as the Toymaker seems to be legally qualified to perform marriages in Toyland.

Fortunately, Tom manages to break free and then does something odd: he rallies together all the soldier toys that they’ve made (who magically come to life) and then attacks Mr. Barnaby with a full-fledged toy attack!

Why doesn’t Tom just wake up the life-sized five kids or Grumio and get them to crash the wedding? I dunno, maybe toys are a better weapon than life-sized people.

As the hilariously stupid battle goes on, Mr. Barnaby eventually gets himself shrunk with the gun and is defeated when he gets trapped in a box.

Grumio then rushes in (apparently not hearing any of the ruckus from the toy battle) with a new invention of his: a growth gun! He then uses the gun to bring the Toymaker, the two henchmen, and Tom back to their normal sizes. Everybody is happy and rejoice and the movie ends with the wedding between Tom and Mary.

And that was Babes in Toyland and it’s just a mess! The majority of the movie has nothing to do with the titular Toyland and focuses on Tom and Mary’s accidental separation and reunion. But that is handled so carelessly that you can’t really get invested in their love story at all!

The music, like I’ve said before, is surprisingly bad and a bad way for Walt Disney to start his foray into live-action musical films!

The only things that I can commend about this movie are that the choreography for some of the dance sequences are enjoyable, the production design of the sets and overall feel of the movie is colorful and unique, and the performances of Ray Bolger and Ed Wynn are so enjoyable that you can’t help but smile whenever they’re on!

If you haven’t seen this film yet, don’t be in a rush to. 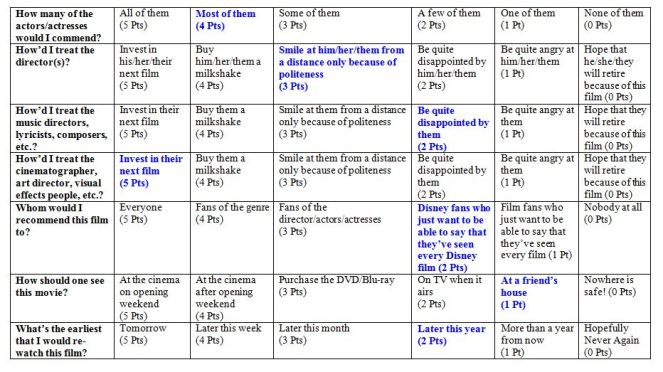 The next review will be posted on June 23rd.