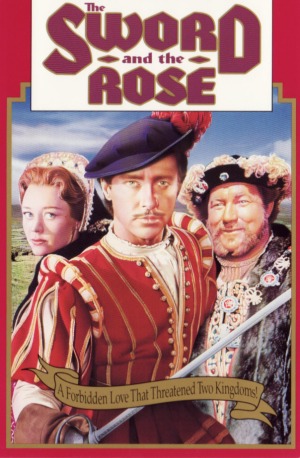 During Disney’s early years of live-action films, there were a few English-oriented ones. By English-oriented, I mean films that took place and/or were based on events from England’s history or folklore. One such example is the film, “The Sword and the Rose”, a film about Mary Tudor, the sister of King Henry VIII.

Does Disney manage to tell this story truly with no embellishment or fabrication whatsoever? Of course not! With that said, let’s dive into “The Sword and the Rose”.

So the film starts out in the palace of King Henry VIII, played by James Robertson Justice.

If he looks familiar, it’s probably because you know him from “Chitty Chitty Bang Bang”.

The King has a sister named Mary Tudor, played by Glynis Johns.

And if she looks familiar, it’s most likely because you know her from “Mary Poppins”.

The King tends to be strict with his sister, but at the same time loves her very much, a trait which Mary Tudor exploits often to get what she wants. That day in the palace, she notices a new arrival to the court, a commoner named Charles Brandon, played by Richard Todd.

She finds herself instantly attracted to him and persuades the King to make Charles Brandon a Captain of the Guard. This act of raising a commoner to royalty (as well as the fact that he loves Mary himself) upsets the Duke of Buckingham, played by Michael Gough.

Continuing on, a good chunk of the film focuses on the love story of Mary Tudor and Charles Brandon. In the beginning, Mary Tudor plays hard-to-get even though she secretly loves Charles and Charles (who himself has fallen in love with Mary) doesn’t proclaim his love for her because he knows his status.

Nevertheless, they spend much time together (mostly due to Mary Tudor’s schemes) talking in the badminton court,

learning a new “dance craze” (if that term even applies to England in the 1500s),

and going along with the King and his men to hunt birds. It’s during this latest venture wherein they finally pronounce their love for each other.

No, the film isn’t over yet.

Trouble springs up as King Louis XII of France is interested in marrying Mary Tudor and sends a few ambassadors to England to ask for her hand in marriage. King Henry VIII wants her to marry him as well as it means more money for  his kingdom. But as you can imagine, Mary Tudor doesn’t want to marry King Louis XII and even locks herself in her room and refuses to meet the ambassadors. This infuriates King Henry VIII and the ensuing scene can be comprehended as follows:

Ok, it’s not that dramatic. What really happens is that King Henry VIII cools down a bit and leaves in hope that Mary will change her mind about the match. Once they’ve gone, Mary Tudor, with the help of her lady-in-waiting, escapes the castle and tries to find Charles Brandon so they can “run away together and live together forever in each other’s arms” or some such romantic cliché.

The peculiar thing is that Charles Brandon is nowhere to be found. Apparently, he felt guilty of his feelings for Mary and decided to join a sea voyage heading to the New World so as to be away from Mary forever.

This saddens Mary until she decides herself to go after him to the New World. Fortunately, the ship hasn’t left yet, and she and Charles reunite before the ship sets sail. Once they reaffirm their love for each other, Charles has Mary disguise herself as a man because no women are allowed on this particular ship. But as you can imagine, that charade doesn’t last too long as the truth is revealed not long after departure and the ship heads back to the mainland where King Henry VIII and his men are waiting.

They capture Charles, accuse him of kidnapping Mary, and banish him to the Tower of London. But King Henry VIII makes a deal with Mary: King Louis XII is old and unlikely to live much longer. If she agrees to marry him, she can choose anyone at all she wants to be her second husband and Charles’ life will be spared. Mary agrees to this and marries King Louis XII to save Charles.

King Henry VIII, happy with Mary’s decision, tells the Duke of Buckingham to release Charles. But as we know, the Duke is after Mary for himself, hence he becomes the villain and a new subplot is formed.

He tells Charles that Mary has married King Louis XII, but purposely withholds the information about the deal she made. He then allows Charles to escape the Tower of London, but secretly has two assassins follow him after in an attempt to kill him. Charles survives the assassination attempt, but the Duke doesn’t know that and is happy that Charles is out of his way making it much more easy for him to get Mary and/or the kingdom.

Meanwhile, back in France, we see that although he’s old, King Louis XII truly loves Mary very much. But Mary couldn’t care less and does all she can to expedite his decease such as persuading him to drink more and more alcohol against his doctor’s orders

and persuading him to gallop faster and faster on a horse so that he collapse due to exhaustion. Wow Mary, you’re diabolical!

Anyway, King Louis XII does die soon after and when the Duke of Buckingham goes to France to bring Mary back, he informs her that Charles is dead. She is overwhelmed with sorrow and thankful for a wonderful friend as the Duke. Then, the Duke pops the question of marriage on her, to which she refuses.

This doesn’t please the Duke and he tries to force her to marry him when all of a sudden Charles arrives on the scene. This results in a duel between the Duke and Charles that ends with the Duke’s death!

Mary is reunited with Charles, King Henry VIII (reluctantly) keeps his promise and allows them two to marry, and Charles gains the title of Duke of Suffolk. This is where our historical drama, and I mean DRAMA, ends!

Ok, I’m not a person who was familiar with the story of Mary Tudor, but from what I understand, a good majority of this film isn’t true. But that doesn’t really make the film not work. The main reason that this film doesn’t work is that it’s BORING!!! The plot is not captivating enough to suck you in nor is the love story believable enough.

The acting can be good at times. Glynis Johns does a great job portraying Mary Tudor as a selfish, always-gets-what-she-wants woman. And Michael Gough is a joy to see because…well, because he’s MICHAEL GOUGH!

James Robertson Justice can also be bombastic and enjoyable. But Richard Todd is extremely bland and is pretty much like Clark Gable except without the talent.

I’m sure that better films have been made regarding Mary Tudor, so I won’t be recommending this film to history buffs anytime soon!

The next review will be posted on February 17th.