What’s one way to make an enjoyable, magical classic? Well, take the magic and charm of Ireland, throw in a simple yet investing story, and add in wonderful actors including a future James Bond and within one box office weekend, you’ve got yourself a masterpiece! And our film today pretty much follows this formula. So without further ado, let’s sit back and review “Darby O’Gill and the Little People”.

So the film begins with this disclaimer from Walt Disney himself:

After that “true” disclaimer, we’re not too long introduced to the main character of the film, Darby O’Gill. Darby, played by Albert Sharpe, is an old Irishman who works as a caretaker of an estate wherein he lives with his daughter, Katie. When not working, Darby can be found in the local tavern telling the townspeople stories of leprechauns and his dealings with them.

One day he tells them a story about one time when he went up to the nearby mountain of Knocknasheega and caught the eye of the king of the leprechauns himself, King Brian. According to the leprechaun laws, the King, played by Jimmy O’Dea, is now indebted to grant Darby three wishes.

Naturally, Darby made his three wishes all of which were fulfilled by King Brian. But, the King slyly coaxed Darby into making a fourth wish, thereby making all the past wishes null and void! 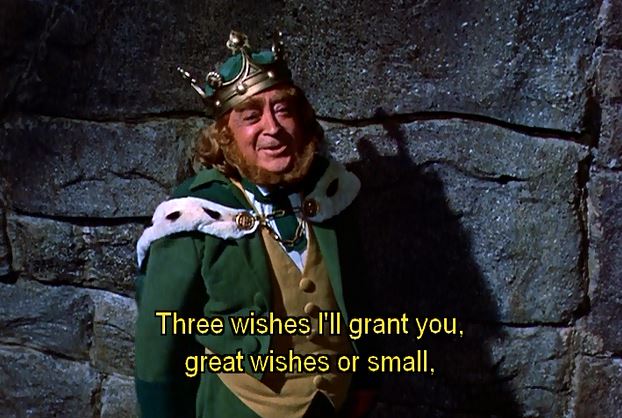 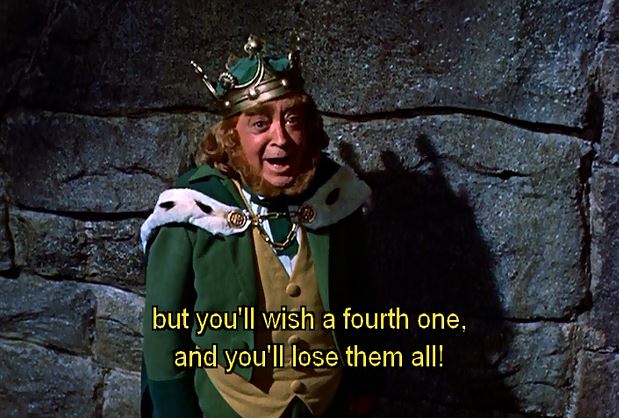 Surprisingly many people in the pub believe this story and unsurprisngly, many people don’t, including a man named Pony Sugrue, who’s supposed to be somewhat of an antagonist in this film, but all he does is smile stupidly.

One day, the owner of the estate that Darby works for comes into town and tells Darby that a younger man is gonna replace him. This man is named Michael MacBride and is played by a surprising cast choice, Sean Connery pre-Bond days!

Darby is to leave the estate house in 2 days’ time with his daughter, but is free to live in the smaller cottage nearby for the rest of his days. Darby reluctantly agrees to this but tells Michael not to tell his daughter, Katie about any of this and that he would tell her himself. Come to talk of it, who is this Katie person? Well, she’s played by Janet Munro and as other people have said before, she has the CUTEST SMILE EVER!!! I mean, just look! 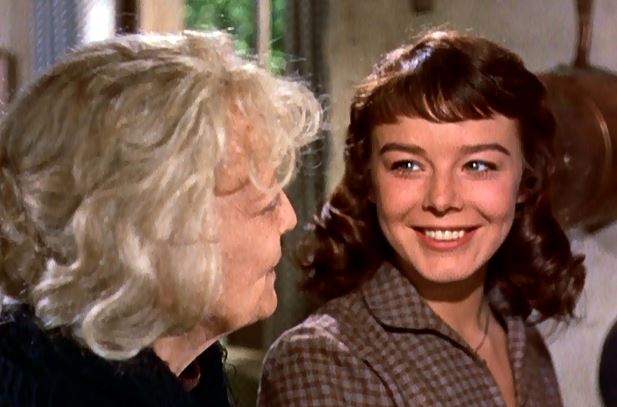 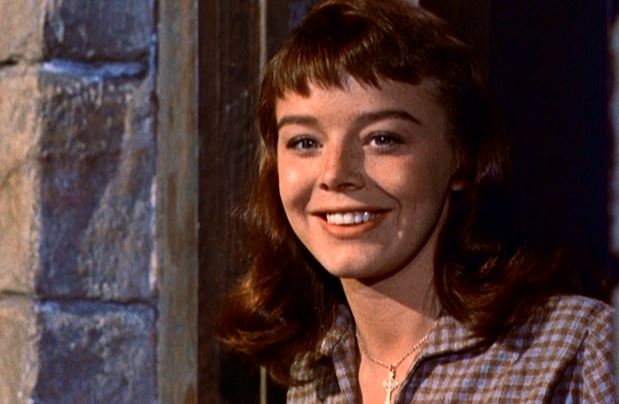 Michael stays with them in the estate house and Darby tells Katie that Michael has been assigned as an ASSISTANT to him. Katie believes this for now, but as we all know, lies in films will always get revealed sometime or the other. As Michael gets to spend more and more time with the family, he becomes close to them, develops a liking for Katie, and even hears about Darby’s tall leprechaun tales which he quickly dismisses.

Later on that night, Darby goes to get his horse from the mountain top, but the horse ends up kicking Darby down a well in a pretty blatant special effect.

Where has he landed in? The leprechaun hideout, of course!

Yep, in case you actually thought that the leprechauns didn’t exist and that Darby was just making up lies, you’re wrong! The leprechauns do and have always existed!

And King Brian himself was the one who called Darby here!

Why? Well, he always liked Darby because of all the tales that he would tell the townspeople of them and was sad to know that Darby’s job was taken from him as well as the estate house, so he decided to call Darby here so that he may live here forever and carefree. One stipulation though: he can never leave!

This of course doesn’t set well with Darby, but he plays it cool and gains the Leprechauns’ trust by playing songs on the Stradivarius for them as they run around him in circles on miniature ponies.

But Darby manages to escape when the Leprechauns stupidly leave their lair through a secret door in the mountains.

Darby then heads home, but with a plan in mind. He knows that King Brian will come looking for him once he notices that he’s missing. So Darby has a jug of alcoholic poteen ready to tempt the King with. You see, leprechauns apparently love drinking and if Darby can keep King Brian with him all night until the day breaks, then King Brian loses his powers for the day and becomes Darby’s prisoner. And that’s exactly what happens! He threatens King Brian with a cat to grant him three wishes. And the first wish is that King Brian stay with Darby for at least a fortnight and not return to Knocknasheega until Darby has wished all his wishes.

So with that settled, Darby keeps King Brian in a bag while he thinks up his other wishes. While all this happens, Michael continues doing his work on the estate while he and Katie fall deeper in love with each other. He even sings a song!

As the days go by, Darby spends his time thinking of what to wish for and even attempts to show King Brian to Michael. But not surprisingly, King Brian (now with his powers restored) changes his appearance to that of a rabbit to fool Michael.

Annoyed by this, Darby inadvertently makes his 2nd wish that Michael be able to see King Brian. That proved to be a waste as King Brian does indeed show himself to Michael…but still as the figure of a rabbit.

More days pass and Darby and King Brian start becoming more friendly with each other; King Brian even helps move along the courtship of Michael and Katie. But like life, the days are filled with bad moments too. The other townspeople can only see King Brian as a rabbit as well and Katie ends up learning the truth about Michael and why he’s there. And as you can imagine, she doesn’t take this news well and develops an anger towards Michael. One night in particular, she heads to the mountain of Knocknasheega in her anger, and is struck down unconscious while a wail is heard. This can only mean one thing. 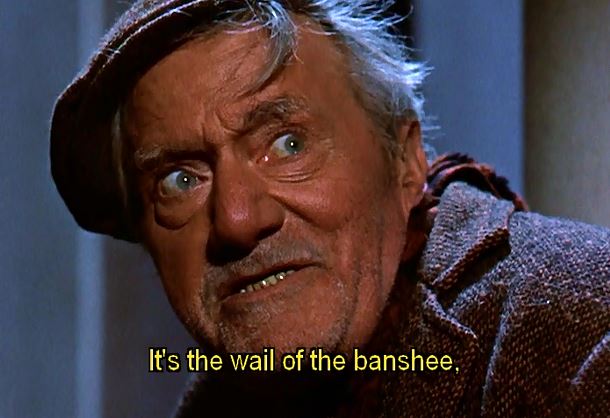 Yep, the legendary banshee lets out a frightening wail whenever someone is about to die. Darby’s wife died the night that a banshee was heard and now he’s frightened that it’s Katie’s turn now. He and Michael carry Katie back home to rest and get the priest to look after her, when suddenly there’s a knock on Darby’s door.

Not only does the banshee come, but the death coach comes as well: a ghostly carriage pulled by ghostly horses and driven by a headless driver that always leaves with someone and never brings them back. This time it’s come for Katie.

For his third wish, Darby wishes that the death coach take him instead of Katie. King Brian grants this wish and Darby sadly enters into the death coach. As the coach rides away into the sky, King Brian appears next to Darby and they start talking about the decision that Darby’s made when this happens.

You see, King Brian tricked Darby into making a fourth wish, thereby nullifying all this previous wishes: King Brian need not stay with Darby anymore, Michael need not see King Brian in any shape anymore, and most importantly, Darby not need to take Katie’s place in the carriage.

Darby is allowed to go free, heads home, and finds Katie well again. She and Michael get married, Darby gets to tell the townspeople about being in a death coach, and everybody lives happily ever after.

And that’s “Darby O’Gill and the Little People” and it’s wonderful! The story has a charm and magic to it that keeps you happy and invested from the beginning to the end. All the actors provide amazing performances…well maybe except the guy who played Pony and didn’t do much besides smile stupidly.

The Irish Gaelic music is a joy to listen to and the song that Sean Connery and Janet Munro sing together is beautiful and catchy. The special effects can be bad at times, but are stupendous for the most part and the artwork/matte paintings used in the backgrounds by Peter Ellenshaw are a joy to view.

I can’t praise this movie enough. “The Happiest Millionaire” used to be my second favorite live-action Disney film, but this has definitely taken over that position!

The next review will be posted on January 20th.