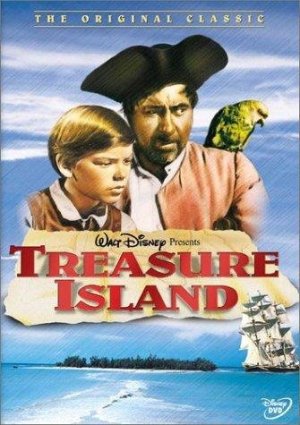 Walt Disney dabbled with live-action since early on in his career with the “Alice Comedies” from the 1920’s in which he put a real person into an animated world.

Even many of his early feature films were a mixture of animation and live-action such as “Song of the South”, “So Dear to my Heart”, “Victory Through Air Power”, etc.

But his first FULLY live-action film was released in 1950. It was a film about swashbuckling buccaneers and buried treasure…a tale of pirates that we all know and love.

I’m talking about the classic film based on Robert Louis Stevenson’s novel, “Treasure Island”. Let’s look at the film together, shall we?

The film opens up to a small inn on the West Coast of England in the year 1765. The inn is run by a woman (she’s unseen…actually there are no women characters in the entire film) and her son, Jim Hawkins, played by Disney wonder boy, Bobby Driscoll.

The inn sees its share of shady characters…mostly seamen asking for rum.

One character in particular is an old pirate by the name of Bones…or Billy Bones…or William Bones…I’m just calling him Bones.

He’s in possession of a map that supposedly leads to the legendary treasure of a pirate named Captain Flint. And because of this, other pirates have been trying to obtain the map from him. On one occasion, they actually manage to invade the inn while Jim is away. They try to find the map, but are unsuccessful.

So where is the map? Apparently, Bones gave the map to Jim earlier on because he knew his end was nearing and got Jim out of the inn before the pirates attacked.

Jim has, on the other hand, managed to get the help of a Squire Trelawney and a Dr. Livesey, played by Walter Fitzgerald and Denis O’Dea, respectively. Together, they rush back to the inn only to find Bones dead and the place ransacked. After showing the squire and doctor the treasure map that Bones gave him, the squire gets an idea.

He decides that they should all hire a crew and go after the treasure themselves. The doctor reluctantly agrees and Jim’s unseen mother (quite surprisingly) allows him to go too.

A few days later, most of the arrangements have been made for the voyage; the only thing needed is to hire a crew, an action that the hired Captain Smollett, played by Basil Sydney, has take personal control over. With nothing else to do, the squire, doctor, and Jim head to a local tavern for some breakfast. The tavern is run by the appointed cook of the expedition, a one-legged man by the name of Long John Silver, played memorably by Robert Newton.

After conversing about the voyage (and flattering the squire a bit), Long John convinces the squire to let him assemble the crew so that they can leave later on that same day. The squire agrees because…you know, all tavern cooks are great assemblers of sea voyage crews.

Once the crew is assembled, the ship is ready to set sail. The problem is that Captain Smollett doesn’t trust the crew assembled by their cook. And to be fair, I wouldn’t trust that crew either. So he tells the squire and the doctor that they should be wary of this crew and keep the true intentions of the voyage (this being a treasure hunt) strictly amongst themselves and the first mate, Mr. Arrow. And that all the firearms be stowed in the Captain’s quarters as a precaution. They all reluctantly agree.

So the ship finally sets sail and we get a montage of ship-sailing…routines. 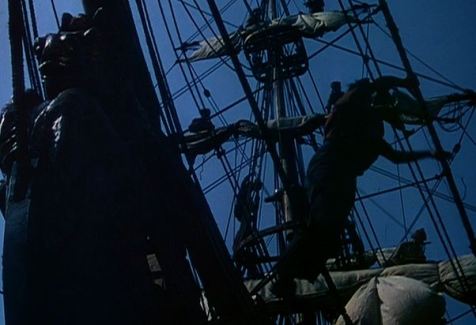 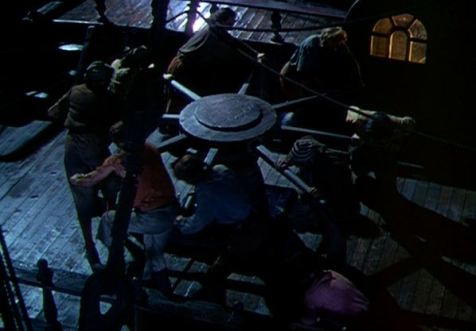 The journey is uneventful for the most part and Jim develops a close relationship with Long John Silver. Jim helps Long John in the kitchen below deck often and the two spend a lot of time together. Long John even gives Jim a gun to keep as a gift….you know, back in the days when giving a gun to a minor was alright.

One day, Long John decides to make a special pudding, but is out of rum. Jim, eager to help, offers to obtain some rum from the squire without the Captain knowing.

Jim gets the rum for Long John and he makes the pudding with it. Later on, a heavy storm is attacking the ship and all the seamen go above deck to keep the ship afloat. But Long John stays below and offers Mr. Arrow some of the pudding to eat before going back above. Mr. Arrow eats the pudding, and due to the (apparently large amounts of) rum in the pudding as well as the violent teeter-tottering of the ship, falls overboard to his death. And nobody ever discovers that Long John was the one who executed Mr. Arrow’s death sentence.

So as you can see, Long John is actually the bad guy and the crew is composed of his men. He and his men were the ones who ransacked the inn earlier and couldn’t find the treasure map. But when he discovered that this expedition was made in order to find the treasure (the secret got out), he did his best to get him and his crew hired. Their plan was to bide time until Long John gave the order to take over the ship from the captain.

One day, Jim overhears Long John and his men discussing their plans below deck and feels betrayed, after all, he’s developed such a close bond with Long John only to find that Long John is nothing more than a mutinous treasure-hunting pirate. Jim then goes and tells the news to the captain, squire, and doctor.

After discussing the matter (behind closed doors, of course), the captain comes to the conclusion that they’re all safe until the treasure island is found. Meanwhile, they’ll arm themselves in case any of Long John’s men get too impatient and want to take over the ship before Long John gives the command. The captain also tells Jim to continue his friendship with Long John so as to not make him suspicious. Jim reluctantly agrees.

By the way, have you ever wanted to know where the stereotypical “pirate voice” originated from? Well, it came from this movie, in Robert Newton’s performance as Long John, to be precise. There have been many pirate movies made before this, of course, and many of the pirates spoke in British accents.

Finally, the day arrives in which the island is spotted. And as predicted, Long John’s mutiny commences. Luckily, the squire, captain, and doctor manage to get the better of most of the men and lock them below deck. Unluckily, Long John escapes on a rowboat with a few of his men and with Jim as a hostage.

As Long John and his men row towards the island, he tells the captain that if he doesn’t surrender himself to Long John’s captured men aboard the ship and hand over the treasure map, then Jim will die. This worries the captain, doctor, and squire who eventually decide to also head to the island (while leaving behind two loyal men to keep watch on the ship) where they think they have a better chance of saving the boy.

the captured men aboard the ship escape from their hold and take over the ship, Long John calls most of the men from the ship to come help him on the island, Jim sneaks aboard the ship and takes over it, the treasure is discovered, and Long John’s men are re-captured.

What about Long John himself? Well, he escapes capture and rows away from the island. And we all feel sympathetic towards him…he’s like Gaston…just a lovable bad guy.

What to say about the film? Well, for the first fully live-action Disney film, it’s not a bad film. But the film can be boring at times especially when compared to the types of films that are around nowadays. The film is also somewhat violent for a 1950 film; it actually now has a PG rating in the USA.

Is there anything good in it? Well yeah, Robert Newton as Long John Silver is amazing to watch. Like I said before, he revolutionized the portrayal of pirates in films, especially regarding their voices. He would reprise his role as Long John Silver in a future (non-Disney made) sequel as well as a TV show about the character. (He also would play Blackbeard the Pirate in a later film.)

All the actors in the film act well, even though some of the characters are quite boring. We can certainly see that this film had many problems; we also see that many of these problems were fixed in future live-action Disney films. For that, we are grateful.

In the end, “Treasure Island” is an important film and one that everyone should see at least once in their lives. 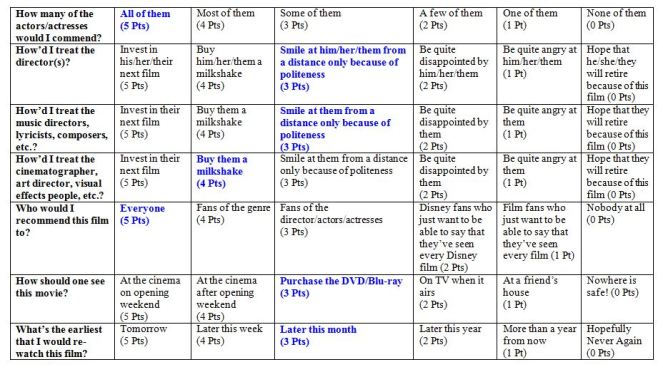